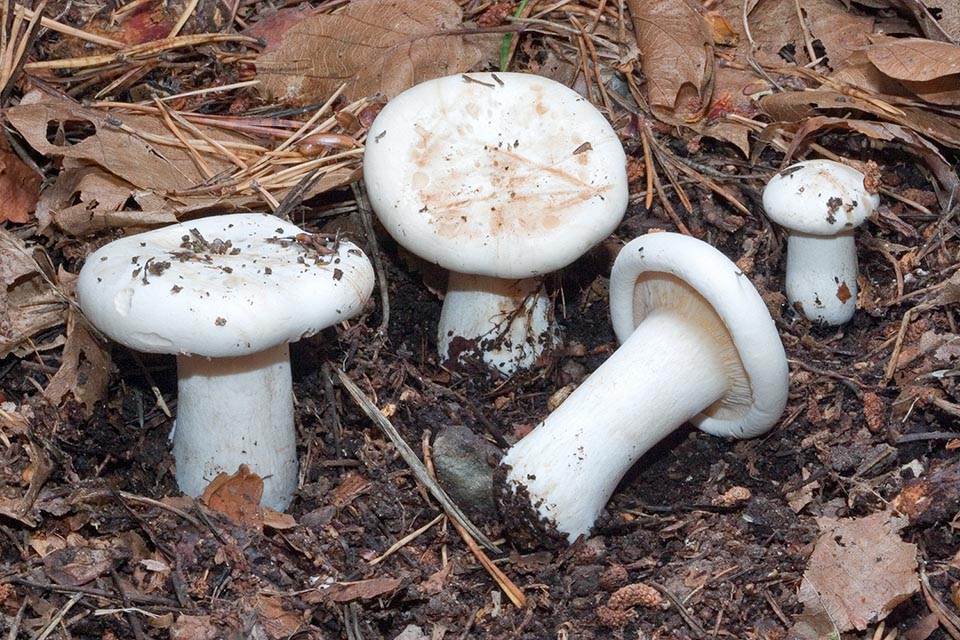 The genus Aspropaxillus Kühner & Maire 1934 is formed by the Greek “ασπρος” (aspros), white, and the generic term of similar mushrooms, the Paxillus they also characterized by the enrolled margin. In short, it is a white Paxillus. The specific term candidus, candid in Latin, equally highlights the white colour of the carpophore. 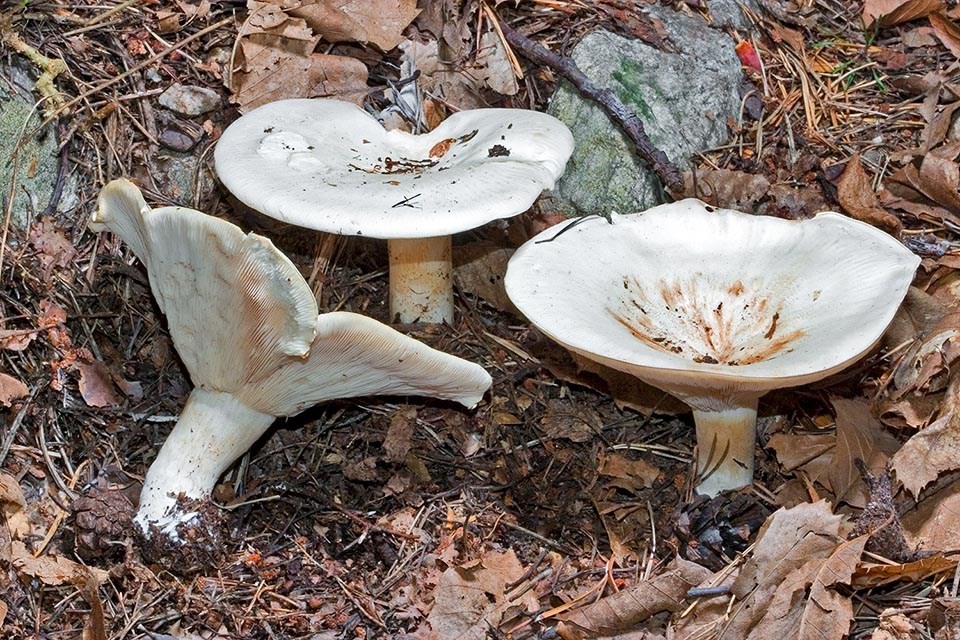 The cap is candid, as highlighted by the scientific name, even 15 cm broad. Initially it is convex, then flat-convex and, finally, depressed © Giuseppe Mazza

To the genus Aspropaxillus are ascribed mushrooms with clitocyboid, tricolomatoid or paxilloid posture, homogeneous, without veils and often with whitish colourations. The cap is convex to depressed, smooth to pruinose, velvety, dry, with convoluted margin and in some species, striated. The gills are from emarginate to decurrent, white, yellow or pink. The stem is fleshy, at times pruinose at the apex.  The flesh, mild or sour, has often a floury smell.

Cap: 3,5-15,0 cm of diametre, fleshy, convex before then flat-convex, finally depressed, initially convoluted margin the curved, entire, at times just a little ribbed; glabrous surface, smooth, dry, candid white, sometimes after collection presents some guttulae, especially near the margin and the colour gets off-white with some light ocher shade. 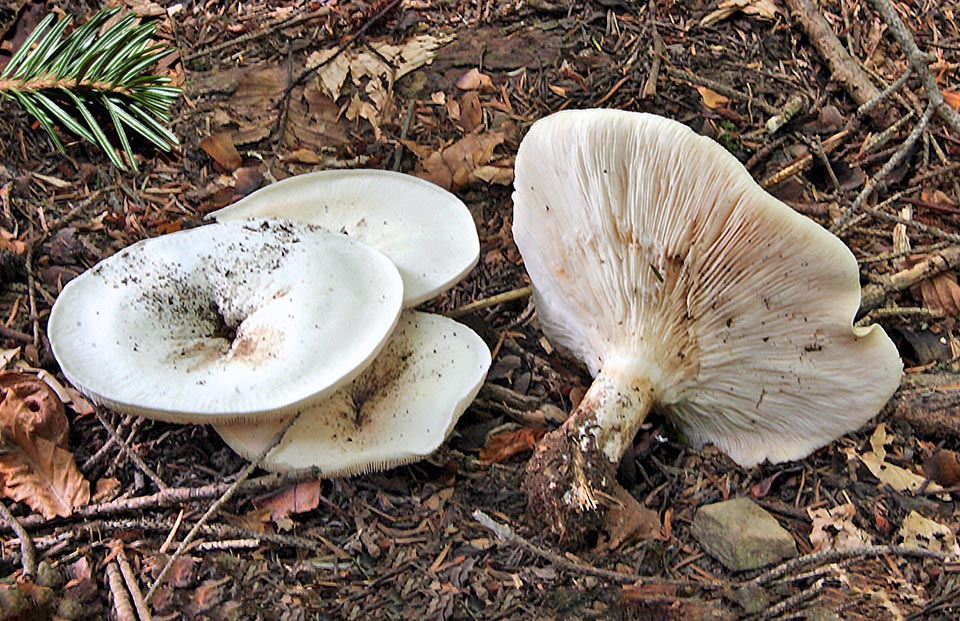 Specimens in a beech and silver fir wood. To note the pinkish reflection on the gills in the ripe mushroom and the cap tending to depress © Pierluigi Angeli

Habitat: Autumnal species growing normally in the mixed deciduous and of conifers woods in mountain, forming the so-called “fairy rings” due to its fruitification in circles. 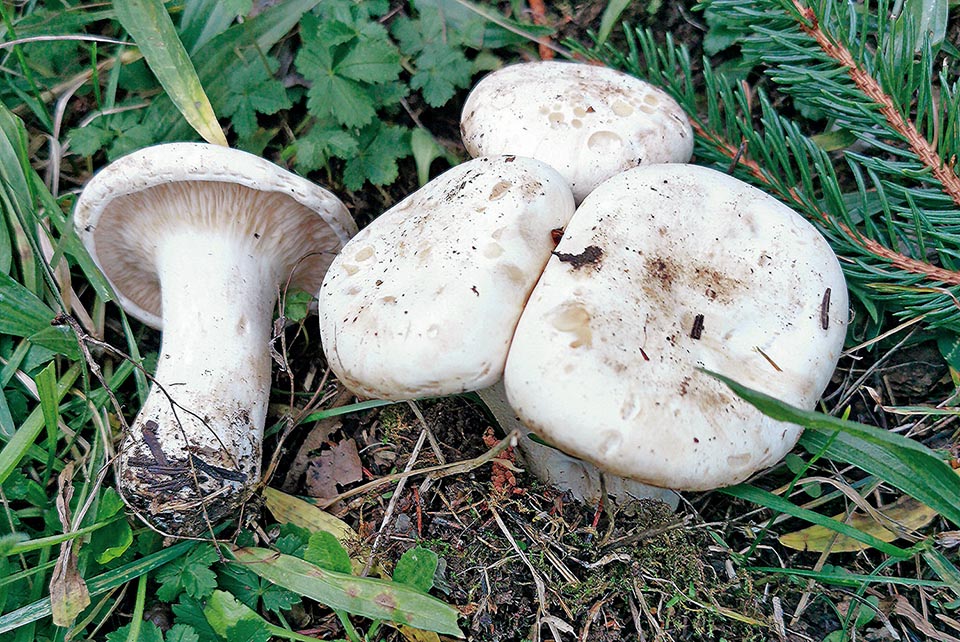 In the right mushrooms, grown together, are evident the characteristic guttulae towards the margin of the cap © Pierluigi Angeli

It is a species fairly diffused in Italy, but also all over Europe, in the clearings of the mountain woods.

It is quite easy to be recognized due to its gregarious growth, usually in circles, the fleshy white cap, the inrolled margin with short ribs-grooves.

It is very similar to Aspropaxillus giganteus (Sowerby) Kühner & Maire [= Leucopaxillus giganteus (Sowerby) Singer], which, however, has large dimensions. It may reach 25-30 cm of diametre of the cap, less fleshy, highly infundibuliform, even in the young specimens, little convolute margin and more evident ribs-grooves, especially in the ripe specimens. Its colour initially is white-cream but turns immediately cream-hazelnut with ochre shades. The flesh has a floury and aromatic odour, loathsome when old. It grows in autumn in the mountain meadows or pastures, even at high altitudes, appearing in numerous groups, with a circular tendency, a growth faster than the Aspropaxillus candidus. 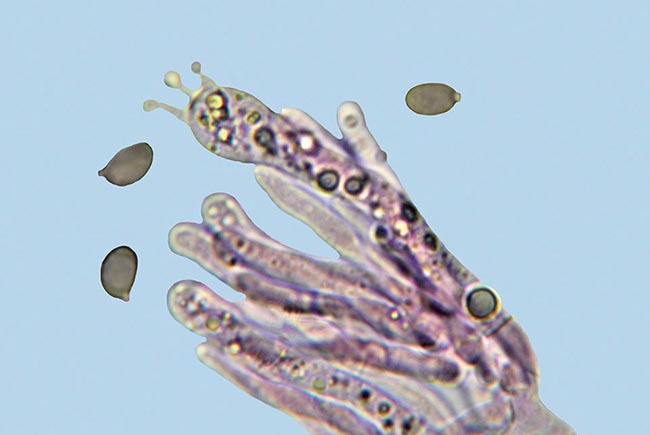 Moreover, the stem is very short if compared to the diametre of the cap, clavated with an enlarged base.

Its flesh has a strong aromatic odour. Species typical to the Mediterranean zones, is gregarious in grassy zones, especially if close to the lentisk (Pistacia lentiscus L.), in autumn.

In 1939 Singer adderts that this species has no affinity with the Clitocybe for the simple fact that its spores turn dirty purple with Melzer’s reagent; for this reason, he recombines the species in Leucopaxillus candidus (Bres.) Singer, however indicating, in brackets, the genus Aspropaxillus R. Kühner & R. Maire; this genus has been created by Kühner & Maire (1934) to place there species with slightly amyloid spores having clitocyboid habitus.