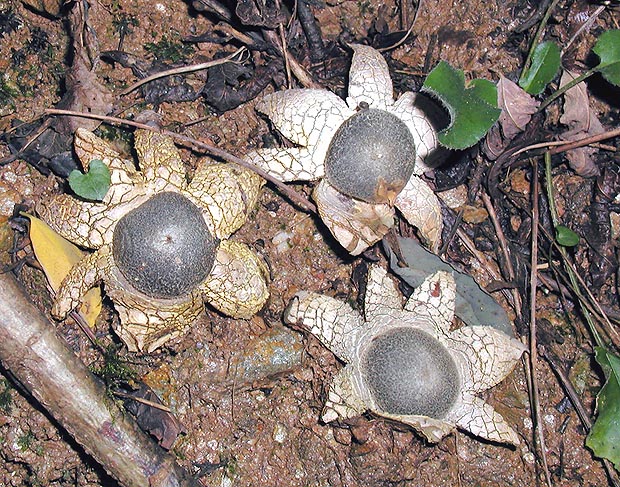 Stellate, the Astraeus hygrometricus opens and closes depending on the humidity © Giuseppe Mazza

The name hygrometricus , comes from the Greek “hugrós” = humid, and “metrikós” = metric; i.e. measuring the humidity.

The genus Astraeus characterizes itself for its globular shape and the semi-hypogean growth, the exoperidium which, when opening, forms a star; the gleba without columella and capillitium.

The fungi belonging to this genus are very much hygroscopic.

To this genus are ascribed three species only: Astraeus hygrometricus is the only European species of the genus; A. pteridis (Schear) Zeller is a species of western USA and finally, A. koreanus (Stanek) Kreisel, which, on the contrary, is Asian.

Carpophore: 2-2,5 (3) cm when closed, 8-10 cm when open, initially globular, semi-hypogean, partially wrapped by mycelial cords, then surfacing thanks to the star-shaped opening of the esoperidium, leaning across the ground, mostly, on the tips of the lacinias. It is highly hygroscopic.

Exoperidium: rather thick, hard, formed by three differently coloured layers, it has dark-grey shades outside whilst inside they are dark-brown; it tears in 5-10 (12) lacinias, which, when the weather is wet, open in a star-like manner; when the same is dry, they close on the endoperidium concealing it completely in order to protect it.

Endoperidium: globular, sessile (with the base directly inserted into the exoperidium), often slightly flattened at the apex, thin and frail, whitish, brownish, finely tomentose due to a sort of greyish felting; when ripe, it breaks off at the apex forming an orifice, with radial and irregular lacerations, which allows the exit of the spores.

Gleba: initially fleshy, structured in locules wrapped by the pale, whitish trama which later on, when ripe, becomes brown and powdery.

Habitat: it grows in various types of wood, not related to particular environs, in the clearings, on bare soil, poor, dry, usually in small groups, but solitary at time, initially semi-hypogean, and then emerging, from spring to autumn, very common.

Remarks: it distinguishes quite easily among the stellate carpophores, when open, due to the high hygroscopicity of the lacinias, which close when the weather is dry whilst they open when humid. The carpophores belonging to the genus Geastrum may have a slight resemblance; they differ for having an apical opening with a well formed peristome, the spores are clearly smaller; finally, the resemblance is only macroscopic, but it is limited only to the star-shaped opening of the exoperidium.