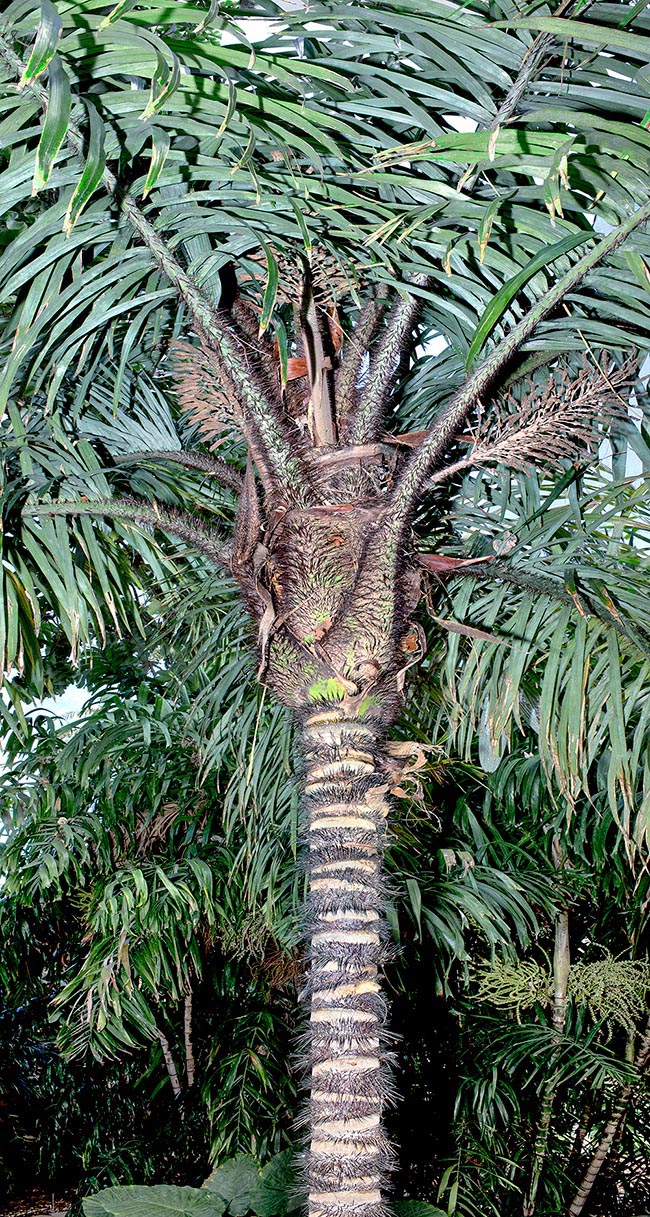 Astrocaryum standleyanum is a palm native to Central-South America where reaches the height of 20 m © G. Mazza

Astrocaryum standleyanum L.H. Bailey  is a palm native from Central to South America.

Its distribution area extends from Nicaragua, Costa Rica and Panama up to Colombia and Ecuador.

Its habitat consists in the not flooded tropical forests, up to an altitude of 300 m, but, more often, at lower heights. It abounds especially in the forests surrounding the Panama Canal.

The name of the genus Astrocaryum is the combination of the Greek substantives “ἀστήρ” (aster) = star, and “κάρυον” (karion) = nut or seed, and refers to the particular grooves present on the seed, whilst the name of the species standleyanum honours the memory of the American botanist Paul Carpenter Standley (1884-1963), who classified many species of plants in the USA, Mexico and Central America.

Monoecious and single-stemmed with dark grey stem, is 15 to 20 m tall and up to 30 cm broad, densely covered by large black flat thorns, very sharp, up to 20 cm long.

The foliar crown is umbrella-shaped and is formed by about 15 pinnate leaves, up to 5 m long, that survive on the stem even for 5 years. The leaves are composed of about 100 drooping pinnulae, irregularly arranged on the rachis in groups, thus, to confer the leaf a feathery look.

The pinnulae are up to 110 cm long and up to 3,5 cm broad, dark green above and glaucous green below. The leaves, the petioles and the other parts of the palm are covered by thorns smaller than those present on the stem.

The inflorescences are ramified and bear up to 200 rachillae, each one with 3-5 female flowers, in the basal part and several male flowers on the upper part.

The female flowers, 6-8 mm long, ripen before the male ones, about 4 mm long, to favour the cross pollination. 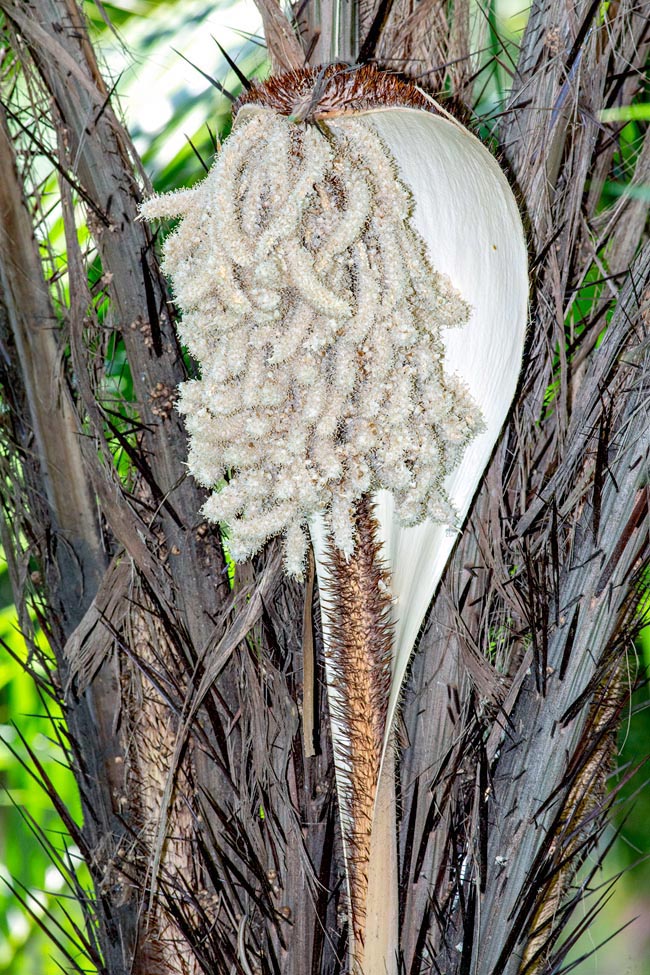 During the ripening of the fruits the inflorescence gets longer up to 150 cm and bends hanging down under the weight.

The fruits, that in optimal conditions may be even 500 per each inflorescence, are ovoid and are up to 6 cm long and 3 cm broad, initially of grey green colour and then turning orange when ripe.

Very ornamental palm thanks to the big crown of feathery leaves shaped like an umbrella, contrasting with the rather slender stem, is not, however, very diffused in cultivation, mainly for the dangerous thorns present in all parts of the plant.

Its positioning in large parks and gardens must keep present this aspect in order to avoid risky accidents to the persons.

Cultivable in the tropical and in the warm subtropical zones, where the temperature never drops under the 4 °C, it requires soils rich in humus preferably acidic or neutral, maintained constantly humid but very well drained in order to avoid stagnation to the roots.

It prefers shady and scarcely subject to the winds positions, especially when young, but with the age it adapts even to full sun positions.

It easily reproduces by seed, cleaned and kept in water for 48 hours, in fertile loam mixed to sand for improving its drainage. It germinates in 2 months maintained at temperatures between 24-28 °C.

Astrocaryum standleyanum is considered as one of the most economically important palms by the local populations of Central America.

The fruit is edible and has a high nutritional value, especially in A, B, and C vitamins.

The local populations get oil from the fruits and the seeds, using it also as biofuel.

The fruits are also an excellent source of food for the farm animals. 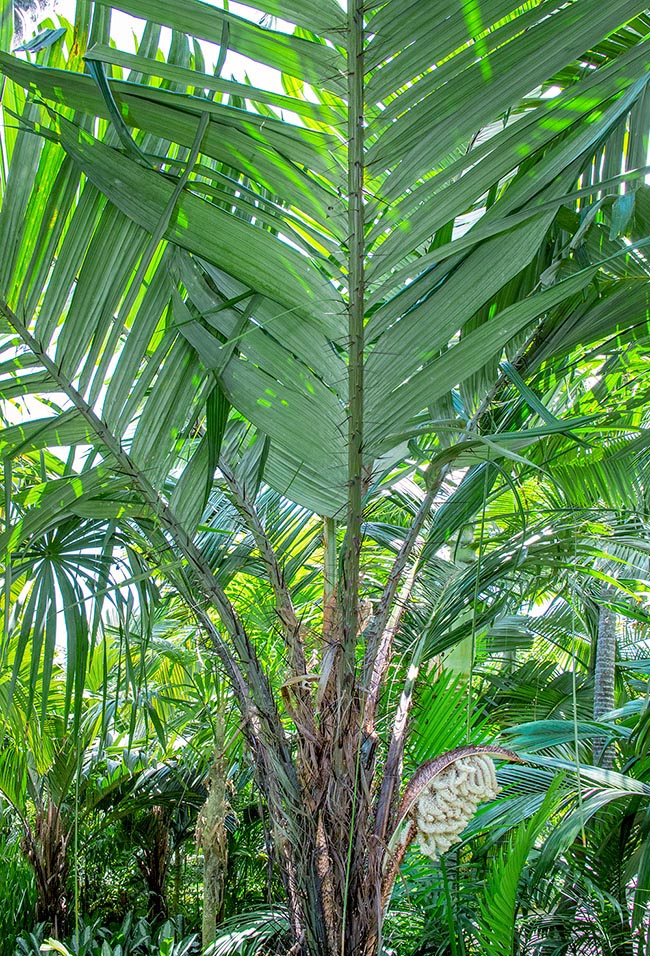 The vegetative apices are utilized for the production of the so-called “palm hearts”.

The petioles and the foliar rachides are used to fabricate walking sticks, bows and fishing rods.

The stems are utilized for building dwellings.

From the young leaves they get two types of fibres, one, thicker, utilized to produce hand-woven craft products such as the so-called “wickerworks”, and the other one, thinner, used in the looms for weaving mats, hammocks and fishing nets.

The preparation of the fibres for commercial purposes involves the removal of thorns, the boiling and following drying in the sun, bleaching with sulfur and cutting in stripes having all the same breadth.

The fibres treated in such a way are then intertwined in bands, with which are made various types of accessories, such as place mats, trays, coasters, vases, baskets, jugs, bags, hats and also jewelry pieces sold locally as well as to international distributors.

Originally, the plants were cut for utilizing the various parts of them, buth with the decrease in the number of the individuals, the natives learnt to preserve them fabricating long poles of bamboo canes with a sharp blade (machete) tied to one end, with which they can easily cut the leaves and the fruits of the plant.

In the origin forests Astrocaryum standleyanum lives symbiont to some species of rodents (Dasyprocta spp.) that reproduce at the time of the fruitification of the palm and nourish of the fruits, dispersing them in the surrounding environments, thus favouring the increase of the distribution area.