The species is native to Australia (New South Wales and Queensland) where it grows in the coastal tropical forests at low altitudes, often on the margin of water streams, on mainly brown-reddish basaltic soils.

The Auranticarpa rhombifolia (A.Cunn. ex Hook.) L.W.Cayzer, Crisp & I.Telford (2001) is an evergreen tree up to more than 20 m tall tree, but that in cultivation maintains lower, with trunk having a greyish bark initially smooth than wrinkly, of 20-45 cm of diameter, and pyramidal foliage. 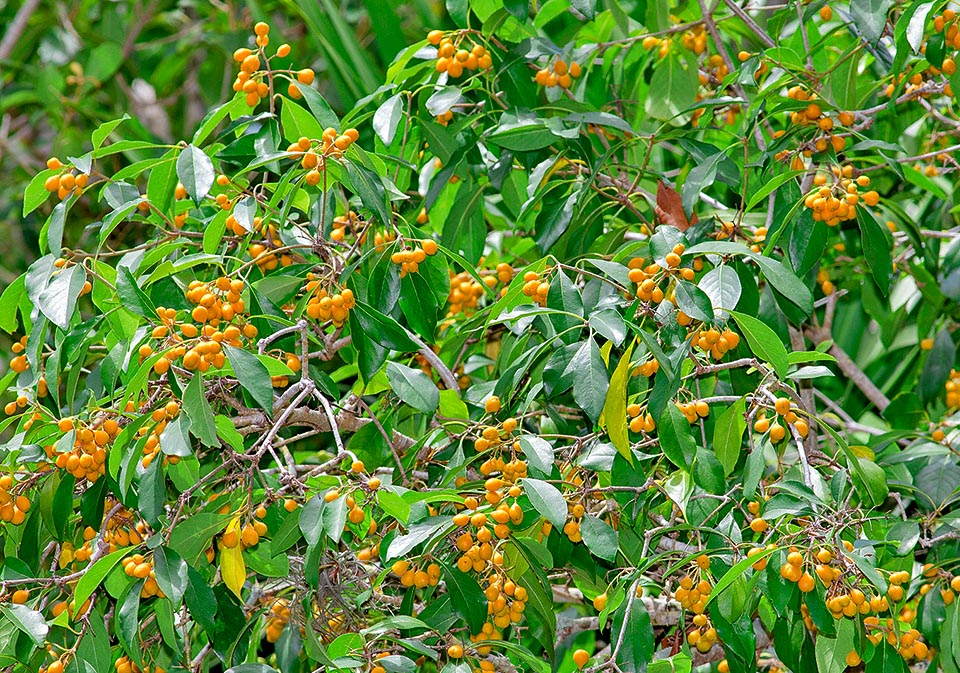 Much lower in cultivation, the Auranticarpa rhombifolia reaches the 20 m in the coastal tropical forests of New South Wales and of Queensland © Giuseppe Mazza

Leaves, on an about 2 cm long petiole, simple, alternate, or grouped at the apex of the branches, elliptic to rhomboid, with apex prolonged in an obtuse tip and irregularly sinuate-serrate margin mainly in the upper half, coriaceous, of glossy dark green colour above, paler below, 6-12 cm long and 3-6 cm broad. Terminal corymbose inflorescences on short peduncle, dense, bearing bisexual flowers, of about 0,6 cm of length and of 1-1,2 cm of diameter, slightly fragrant. Calyx formed by 5 free sepals, about 2 mm long, of yellow colour, corolla with 5 free petals, linear to obovate, of white or cream white colour, 5-6 mm long, 5 stamens of the same length alternate to the petals, and globose biloculare, pubescent, ovary.

The fruits are globose to pyriform capsules, of 5-8 mm of diameter, biloculare, of yellow-orange colour bright when ripe, containing 2-3 ovoid seeds (generally one per loculus) of glossy black colour, about 4 mm long, devoid of the resinous layer covering the seeds of the Pittosporum (one of the reasons that has induced the transfer of the Pittosporum rhombifolium in the new genus Auranticarpa). 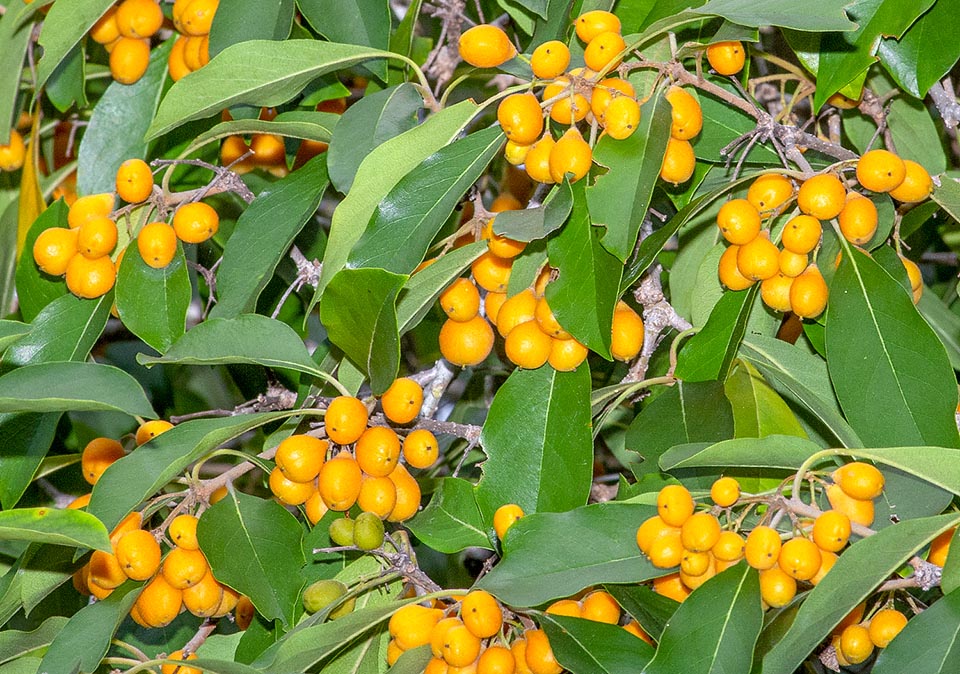 The fruits are globose to pyriform capsules of bright yellow orange colour when ripe, containing 2-3 seeds devoid of the resinous layer that covers those of the Pittosporum, one of the reasons that have recently determined the creation of the genus Auranticarpa for this species, once known as Pittosporum rhombifolium © Giuseppe Mazza

It reproduces by seed that does not have a long lasting germinability, previously kept in water for 2 days, in draining loam maintained humid, but without stagnations, at the temperature of 24-26 °C, the percentage of germination, that occurs in 2-4 months, is usually not very high; it propagates also by cutting.

Very popular species in Australia where it is variously utilized in parks and gardens, even of modest dimensions, and as road tree, due to the rich blooming that happens between late spring and early summer, and the decorative fruits that remain on the plants for long time. Cultivable in the tropical, subtropical and mildest warm temperate regions, where temperatures of a few degrees below 0 °C are short lasting exceptions, as isolated specimen, and for barriers, even windbreaks. It requires full sun, or at most a slight shade, and fertile, perfectly draining soils, maintained almost constantly humid, especially in the initial phase of growth, adult specimens may bear short dry periods. In the least favourable climates it can be cultivated in pot, for the decoration of open spaces, in way to be sheltered during the coldest months in a very luminous environment with temperatures not under the 10 °C.

→ To appreciate the biodiversity within PITTOSPORACEAE family please click here.