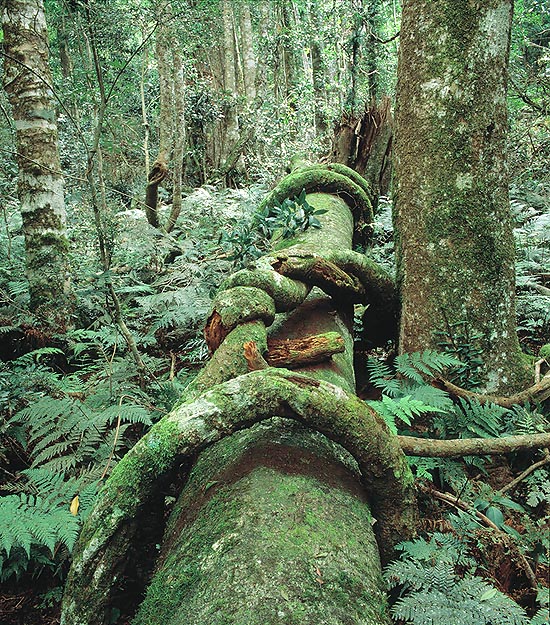 This species is native to Australia, where it grows at the margins of the pluvial forests along the coasts of north-eastern Queensland and of New South Wales, up to 800 m of altitude.

The Austrosteenisia blackii (F. Muell.) Geesink (1984) is a robust perennial woody, semi-deciduous, climber, which may reach a length of about 20 m with a stem diameter up to 35 cm; the young branches and the leaves are initially covered by a rust-coloured down; from the stem, when the same is nicked, a dark red sap gets out, from which the common name originates.

The leaves are odd-pinnate, 10-18 cm long, with 7 to 9 leaflets from obovate to elliptic, of dark green colour, hairless on top, pubescent below, 4-7 cm long and 2-4 cm broad.

The inflorescences are formed by much ramified, pendulous, panicles carrying a crowd of flowers, in pair on the same peduncle, 7-9 mm long, of a colour varying from dark red to almost blackish. The fruits are flat pods, yellow and papery, 5-12 cm long and 1,5-2,5 cm broad, containing up to 8 reniform seeds about 6 mm of long and 3-4 mm broad.

It reproduces by seed, which must be previously scarified in order to notch the hard and waterproof tegument and so help the germination, utilizing a sandy soil rich of humus at the temperature of 20-24 °C.

In spite of its potentialities, due to its much ornamental foliage and the particular showy flowering, this climber is practically unknown outside its origin zones.

It requires tropical, subtropical and warm temperate climate, as it can resist, for a short time, to some degrees under the 0 °C. It requires high luminosity, even full sun, and abundant watering, but may bear dry periods; it may be utilized as soil cover, climber of trees or on robust pergolas.