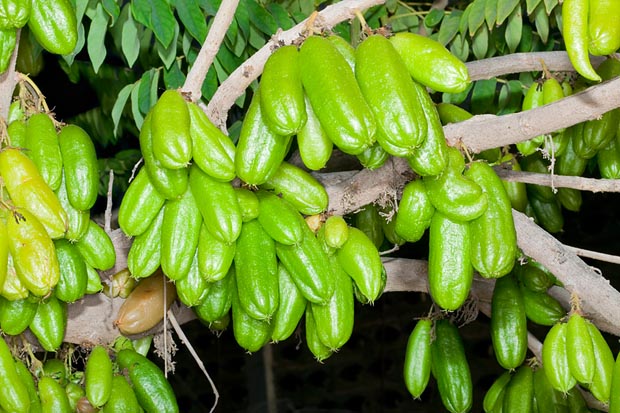 Cultivated since remote times in tropical south-eastern Asia, its exact place of origin is unknown.

The Averrhoa bilimbi L. (1753) is an evergreen tree tall up to 15 m, even if, in cultivation, it usually doesn’t exceed the 5-6 m, ramified, with young branches covered by a yellowish to rusty coloured down. It has alternate leaves grouped at the extremity of the trees, 20-60 cm long, compound, odd-pinnate, with 11-39 leaflets from lanceolate to oblong-lanceolate, up to about 10 cm long and 1-4 cm broad. The leaves in presence of high sunlight show the phenomenon of the para-heliotropism, that is, the parallel disposition to the direction of the solar rays for limiting the insolation.

The inflorescences are drooping panicles, 12-14 cm long, placed along the branches without leaves and on the trunk (cauliflory), carrying up to more than 60 flowers with five 1-2 cm long petals of purple red colour. It has the phenomenon of the heterostyly, with individuals carrying only flowers with short style and long stamina, usually self incompatible and which, therefore, need the crossed pollination, and others only flowers with style longer than the stamina, which are self-fertile. 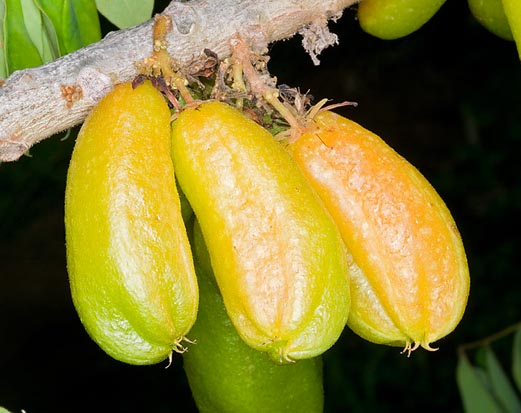 More acid than those of Averrhoa carambola they contain C and A vitamins © G. Mazza

The fruits are oblong berries, slightly lobed longitudinally, with waxy surface of green to pale yellow colour, 5-10 cm long and a diameter up to 5 cm, with fleshy and juicy pulp strongly acid due to the presence of oxalic acid, at levels bigger than those of the Averrhoa carambola, 10-14 mg/g in the unripe fruits and 8-10 mg/g in the ripe ones. The fruit has also high contents of vitamin C, and, in lesser quantity, of vitamin A.

The 3 to 6 seeds are almost circular, about 0,6 cm of diameter, flat, brown. It usually reproduces by seed, with a production starting from the fourth year of age, in a lesser degree by air layering and grafting, when the production of a particular variety is sought for.

Species cultivable in full sun in the tropical climate zones, and, marginally subtropical, humid, it in fact less resistant to the low temperatures than the Averrhoa carambola, values around the 0 °C cause damage to the foliage and may be fatal for young plants; the adult ones can resist up to -2, -3 °C for quite a short time, even if with extended damage of the foliage.
It is not particular about the soils, even if it prefers those rich, draining, slightly acidic, kept constantly humid. The fruits, delicate and highly decayable, due to the high acidity are not consumed as they are, but are utilized cooked for seasoning various dishes or used for making preserves; the fruit and its derivates must, in any case, be totally avoided by the persons having kidney problems.

In the past, the fruits were utilized for whitening the spots on the skin, removing the rust stains on clothes, cleaning the knife blades and polishing brass objects. Leaves and fruits are utilized in the traditional medicine for various pathologies, but are to be used with much care due to the collateral effect caused by the high contents in oxalic acid.