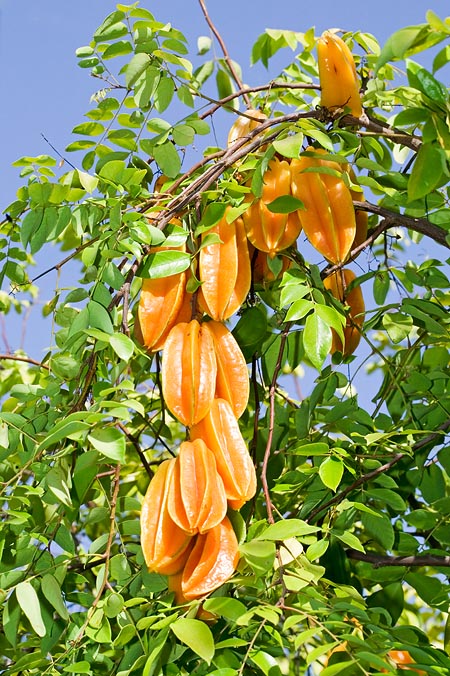 The Averrhoa carambola is a much ramified small tree © Giuseppe Mazza

Cultivated since remote times, its place of origin is unknown, probably, it is Java.

The name of the genus reminds the Arabic philosopher, jurist and physician of Spain, Abū al-Walīd Muhammad ibn Ahmad ibn Muhammad ibn Rushd, known in the Latin West under the name of Averroes (1126-1198); the name of the species is that utilized, in ancient times, by the Portuguese in the Malabar region and adopted later on by Spaniards and English.

The Averrhoa carambola L. (1753) is a small evergreen tree much ramified, usually tall up to 5 m, even if some specimens may reach the 10 metres, with trunk having a smooth or slightly fissured bark, greyish or dark.

It has compound, odd pinnate, alternate leaves, 10-25 cm long, with 5-11 opposite or sub-opposite leaflets, ovate-oblong, of 3,5-8,5 cm of length and 1-4 cm of breadth, initially of bronzed red colour, then more or less dark green and smooth on the upper page, slightly tomentose and whitish below; the leaflets have a moderate sensitivity to the light as well as to the shocks, folding together in the darkness and when the plant is submitted to violent shocks.

Axillary paniculate inflorescences, produced in different periods of the year on the thin young branches and also on those of bigger diameter having no leaves, and at times on the main stem, with short reddish rachis and hermaphrodite funnel-shaped flowers, of 0,5-1,2 cm of length and 0,6-1 cm of diameter, with five lilac petals; the pollination is mainly done by bees.

It has the phenomenon of the heterostyly, with individuals carrying only flowers with short style and long stamina, usually self incompatible and which, consequently, need the crossed pollination, and others only flowers with style longer than the stamina, which are self-fertile.

The fruits are oblong berries with 5-6 longitudinal ribs, 5-15 cm long and of 4-8 cm of diameter, with the typical star shape, with exocarp (the “skin”), edible, thin, smooth and waxy with a colour going from the pale yellow to the orange yellow and crunchy yellow pulp and juicy when ripe, with the taste going from rather sweet to definitely sour, depending on the variety, due to the bigger or lesser presence of oxalic acid. 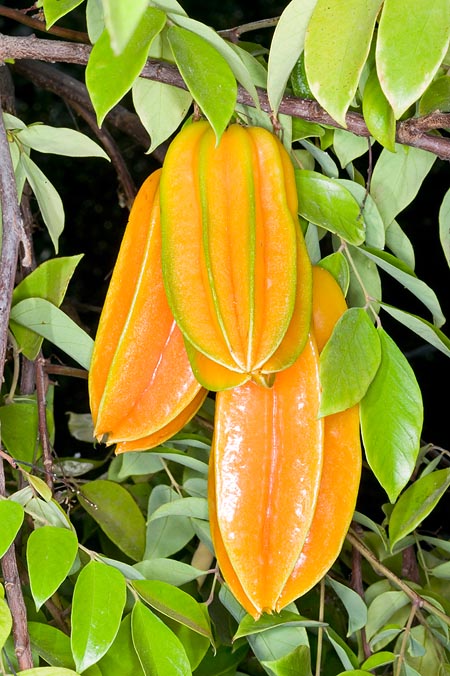 The typical fruits are edible and rich of vitamins © Giuseppe Mazza

The seeds, from 0 to 12, are flat, 0,6-1,2 cm long, brown. It reproduces by seed, which germinates in 1-2 weeks; to be placed in the ground in short time as it does not have a long lasting ability to germinate once extracted from the fruit; for the reproduction of the varieties recourse is done to various types of graftings.

From the seed, from 4 to 6 years are necessary for the first flowering, grafted plants may, conversely, flower in a year. The useful duration for production purposes is of about 25 years.

It is a species cultivable in full sun in the tropical and humid subtropical zones, with a rainfall distributed between 1500 and 3000 yearly mm of rain, in the zones with minor rainfall, it needs periodical irrigations, its cultivation may be tried in the warm temperate zones where the temperatures around the 0 °C, are a short lasting exception, as a matter of fact, temperatures between the -2 and the -3 °C can be fatal for young plants, in addition to cause damage to the leaves and young branches of adult plants; these ones seem to resist, even if with a wide damage to the foliage, up to about -5 °C, but always of a very short period.

It requires well draining soils as it does not bear water stagnations, neutral or slightly acidic, in calcareous soils it may present phenomena of chlorosis which may be corrected with by administering, on the leaves, microelements under the form of chelates.

Many varieties have been selected, grouped in two typologies, those richer in oxalic acid, up to about 7 mg/g, with sour taste, but more aromatic, and the “sweet” ones, less aromatic, but with a lesser contents of oxalic acid, between 0,4 and 0,8 mg/g, and and therefore more pleasant to the palate and which, during the last decades, have contributed to a remarkable increment in the utilization of this fruit.

The fruit has also high contents of vitamin C, between 15 and 50 mg/100 g of fresh fruit, depending on the variety and on the degree of ripeness, and, in a lesser quantity, of vitamin A, as well as flavonoids, fibres and minerals, in particular, potassium.

The “sweet” varieties are consumed mainly raw, cut in thin slices, for salads or added as decorative element in several dishes, the juice is utilized for preparing drinks or ice-creams, whilst the sour ones are utilized cooked, in addition to various typical local dishes, or for preparing preserves and candies.

It must be kept in mind that the ingestion of huge quantities of fruit or of juice may cause, in a few hours, various ailments followed by serious neprhopathies with even fatal outcome, the fruit and its derivates must be, in any case, totally avoided by persons having renal problems. 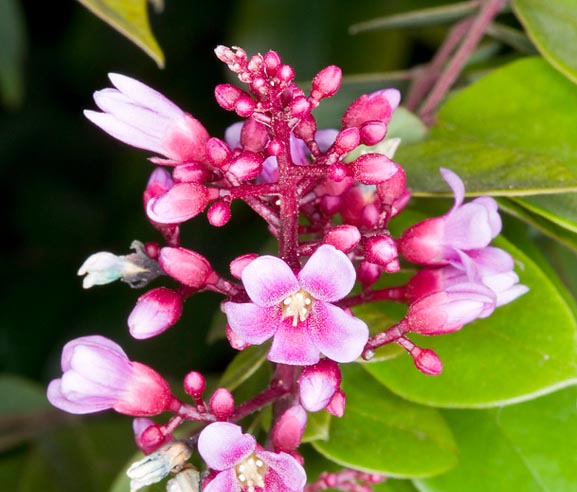 Furthermore, like the grapefruit, the fruit and its derivates are strong inhibitors of some enzymes having an important role in the absorption of many medicines, such as those based on statins and benzodiazepines, with consequences which can reveal even serious.

The fruit is very delicate and decays rapidly at ambient temperature, it can be conserved for about 3 weeks at a temperature standing between the 5 and the 10 °C.

Fruits and leaves are utilized in the traditional medicine for various pathologies, but are to be utilized with much caution due to the collateral effects.

The Averrhoa carambola, apart for its fruits, is often cultivated as ornamental plant in parks and gardens thanks to its delicate foliage, the pink inflorescences and the numerous golden fruits.

Due to its fairly slow growth, it adapts to the cultivation in pot, succeeding also to fructify, utilizing a soil rich of organic substance, slightly acidic, with addition of sand or agri-perlite around the 25%.