Pantropical species diffused along the Atlantic coasts of Africa, from Mauritania to Angola, of the Americas, from southern USA to Brazil, and in the Caribbean, is present discontinuously also in the Pacific coasts from Mexico to Peru. It mainly lives in the estuaries of the rivers in the zones periodically flooded by the tides (intertidal zones).

The name of the genus honors the Persian philosopher and physician Abū ‘Alī al-Ḥusayn ibn ‘Abd Allāh ibn Sīnā (980-1037), known in the western world with the name of Avicenna; the specific name is the present participle of the Latin verb “germino” = to germinate, to sprout, with reference to the seeds that germinate in the fruits still attached to the mother plant.

The Avicennia germinans (L.) L. (1764) is a shrub or a very variable evergreen tree with trunk, up to about 25 m tall, and of 40 cm of diameter, with smooth or slightly fissured vertically and horizontally bark of dark brown greyish colour, rich of tannins. In the marshy zones and periodically submerged at the base of the plant is present a dense multitude of pneumatophore roots (roots emerging from the water or from the soil provided of aeriferous tissue, aerenchyma, that allows the influx of oxygen to the underlying roots), erect, up to about 30 cm long, that originate from horizontal roots placed just under the surface of the soil. 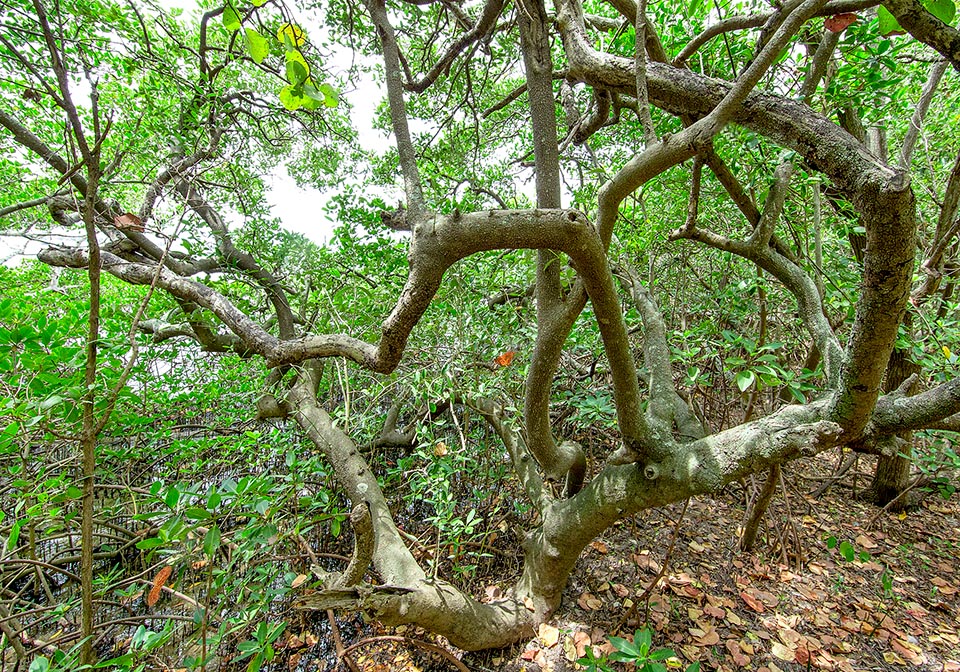 Evergreen pantropical with shrubby or arboreal posture, the Avicennia germinans reaches 25 m of height with trunks of 40 cm of diameter and dark bark, brown-greyish, smooth or slightly fissured. It grows in the marshy lands along the coasts, mainly estuaries and zones periodically submerged by the tides © Giuseppe Mazza

The leaves, on a 0,5-2 cm long petiole, are simple, opposite, decussate, obovate or elliptic lanceolate with acute or obtuse apex and entire margin, coriaceous, of pale green colour and glossy above, covered by a white pruina and by a thick greyish or yellowish down below, 5-15 cm long and 2-4 cm broad; the leaves secrete the excess of salt, that often crystallizes on the surface, through particular glands placed on both sides.

The inflorescences, on a 1-4 cm long peduncle, axillar and terminal, are simple or compound spikes, pubescent, compact, with hermaphrodite zygomorphic flowers with 5 free ovate sepals, about 4 mm long and 2 mm broad, campanulate corolla of 1,2-1,5 cm of diameter, of white or creem colour, pubescent, with 4 oblong unequal lobes, lying or retroflexed, 2-3 mm long, with the dorsal one more or less bilobed, and 4 stamens, two longer and two slightly shorter. The flowers, fragrant and rich of nectar that attracts the bees, are proterandrous (the male organs ripe before the female ones, this avoids the self-fecundation). The fruit is a flat ellipsoid capsule, 2-4 cm long and 0,8-1,2 cm thick, of colour from pale green to yellowish, pubescent, containing only one viviparous seed (that germinates inside the fruit when still on the plant).

The fruits float and the seeds remain viable for long time, this explains the great diffusion of the species, the embryo does not develop and keeps inside the fruit until when this “lands” in a favourable place and emits roots for fixing to the soil; conversely, if dry, the seed has a limited duration.

In the mangroves vegetation prevails the intermediate intertidal zone, as does not resist for long periods with the pneumatophores wholly submerged by the sea water, with soil salinity up to the 90 ‰. 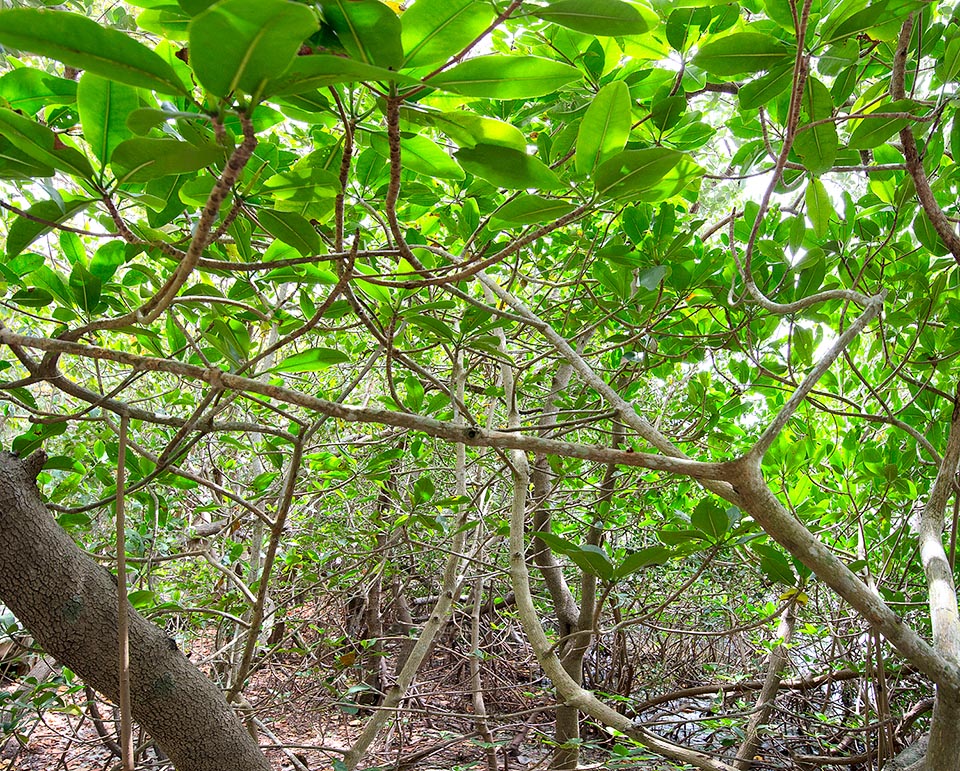 At the base of the plant stands a dense multitude of emerging vertical roots, up to 30 cm tall, called pneumatophores, with an aeriferous tissue that allows the influx of oxygen to the underlying roots. The fruits are poisonous, whilst leaves, roots and bark are utilized in the traditional medicine for various pathologies © Giuseppe Mazza

It grows in the tropical and subtropical climate regions and has proven itself as the most resistant to the low temperatures, going so far as the 30° parallel in the northern hemisphere, with very contained dimensions, where it can survive to exceptional values a little under the 0 °C with loss of the aerial part, but revegetating from the base in spring, and up to the 28° parallel in the southern hemisphere.

It has a considerable importance for the coastal ecosystem as it offers food and shelter for various species of animals, in particular crustaceans, birds and reptiles.

The fruits are poisonous, whilst leaves, roots and bark are variously utilized in the traditional medicine for various pathologies. The wood, medium heavy and long lasting even if immersed, but rather difficult to work, has a limited use in the civil and naval constructions, in the fabrication of furniture and of handicrafts, is instead an excellent fuel.