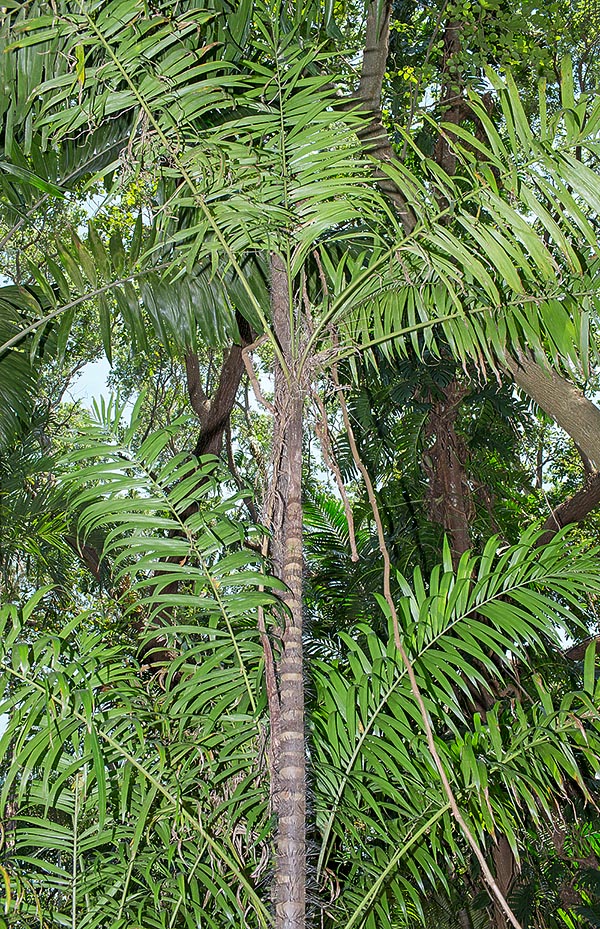 Native to Hispaniola, Bactris plumeriana is a monoecious species, ussually cespitose, with 4-10 m tall stems of 8-12 cm of diameter. The fruits, rich in oil, are locally used for feeding animals, especially pigs, and the stem of the plant plays a leading role in the voodoo rites © Giuseppe Mazza

The species is native to Hispaniola where it lives in the forests and in open areas from the sea level up to hilly altitudes.

The generic name comes from the Greek substantive “βάκτρον” (bactron) = stick, support, with reference to the use of the stems of some species beloging to the genus as sticks; the species is honoured to the French botanist and naturalist Charles Plumier (1646-1704) who has considerably contributed to the knowledge of the American flora.

The Bactris plumeriana Mart. (1844) is a monoecious species usually cespitose with stems, 4-10 m tall and of 8-12 cm of diameter, thickly covered, but in the oldest parts, by rings of blackish spines, of various length and facing different directions, spaced by the annular traces of the junctions of the fallen leaves. The leaves, on a 30-80 cm long petiole run by three rows of black spines, are pinnate, slightly curved, 1-2,5 m long, with 50-70 pairs of linear leaflets with unevenly bifid and spiny margins, 40-70 cm long in the median part and 2-4 cm broad, of intense glossy green colour, irregularly arranged and on different levels along the rachis, also prickly.

Spiny inflorescences among the leaves (interfoliar), initially enclosed in a blackish and thickly spiny spathe, semi-woody and persistent in fruit, with ramification of the first order bearing unisexual whitish flowers arranged along the rachillae in triads (a female flower between two male) irregularly spaced by male flowers solitary or in pair. The inflorescences have the phenomenon of the proterogyny (the female organs mature before the male ones) that favours the crossed fecundation. Globose fruits, of 1-1,5 cm of diameter, of orange red colour when ripe, containing one single seed.

It reproduces by seed, previously cleaned and immersed in water for two days, in draining loam maintained humid at the temperature of 26-28 °C, with germination times of 3-4 months, and by division.

Species with a particularly elegant crown, but little utilized as ornamental due to the presence of the long spines on the stem and on the leaves that impose their use far away from the passage zones or the parking ones. It requires a tropical or subtropical climate, as it does not stand temperatures close to 0 °C, unless exceptional and very short lasting, and is not particular concerning the soil. The fruits, rich in oil, are locally utilized for feeding animals, firstly the pigs, finally the plant, particularly the stem, plays a leading role in the voodoo rites.