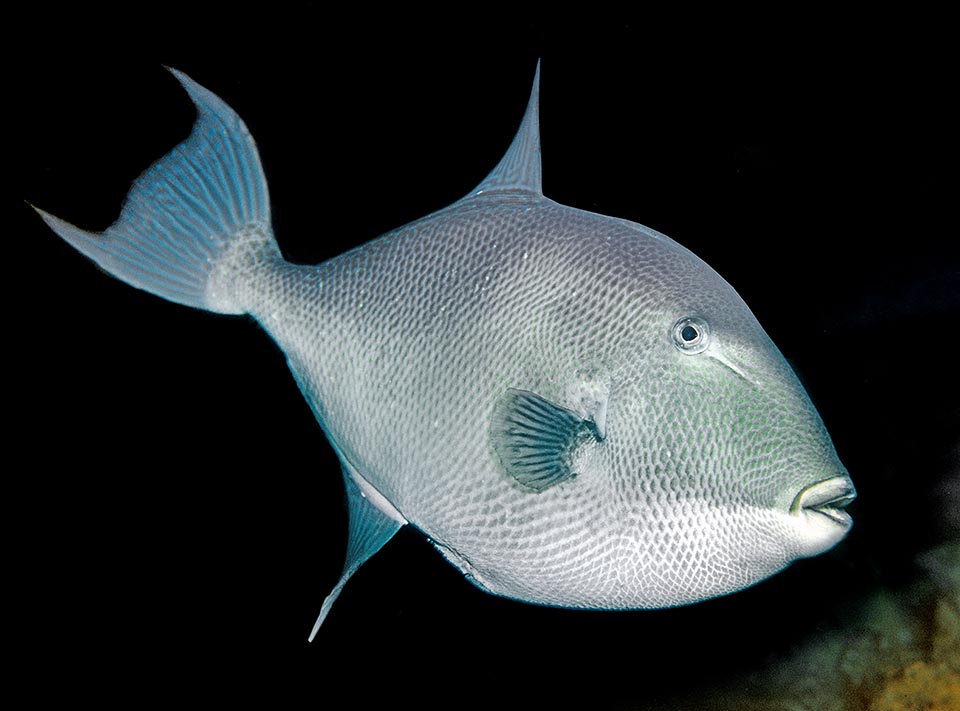 The Grey triggerfish (Balistes capriscus Gmelin, 1789) belongs to the class of the Actinopterygii, the ray-finned fishes, to the order of the Tetraodontiformes and to the family of Balistidae.

The name of the genus “balistes” comes from the Latin “ballista” = crossbow, due to the arcuate shape of the big fins and the presence on the dorsal of a trigger mechanism evoking this weapon of the old times.

The name of the species, “capriscus” should indicate, Latinizing, a “small goat”. 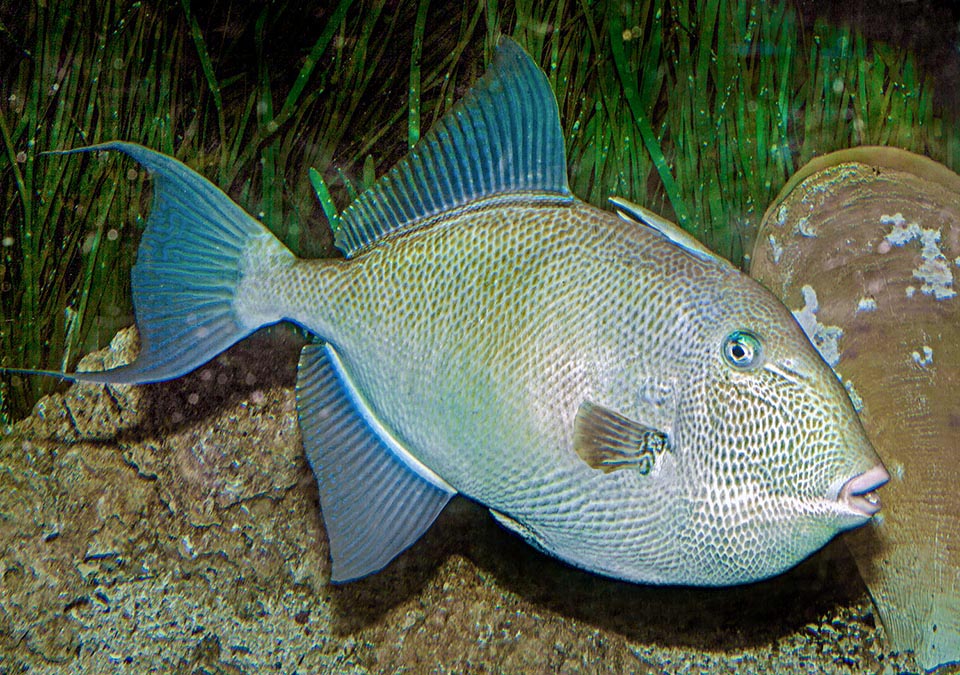 Moreover, it’s the triggerfish that has gone further north up to England and Ireland, and after reaching Angola in Africa is present also on the other side of the Atlantic © Giuseppe Mazza

It is at home in the tropical and temperate waters of the Atlantic Ocean and of the Mediterranean Sea where it is the only one member of the Balistidae.

Just to give an idea about its distribution, we find it along the African coasts from Morocco, Mauritania and Cape Verde up to Angola. Then at Ascension Island and on the other side of the ocean, from Canada, the Gulf of Mexico and the Caribbean up to Brazil. 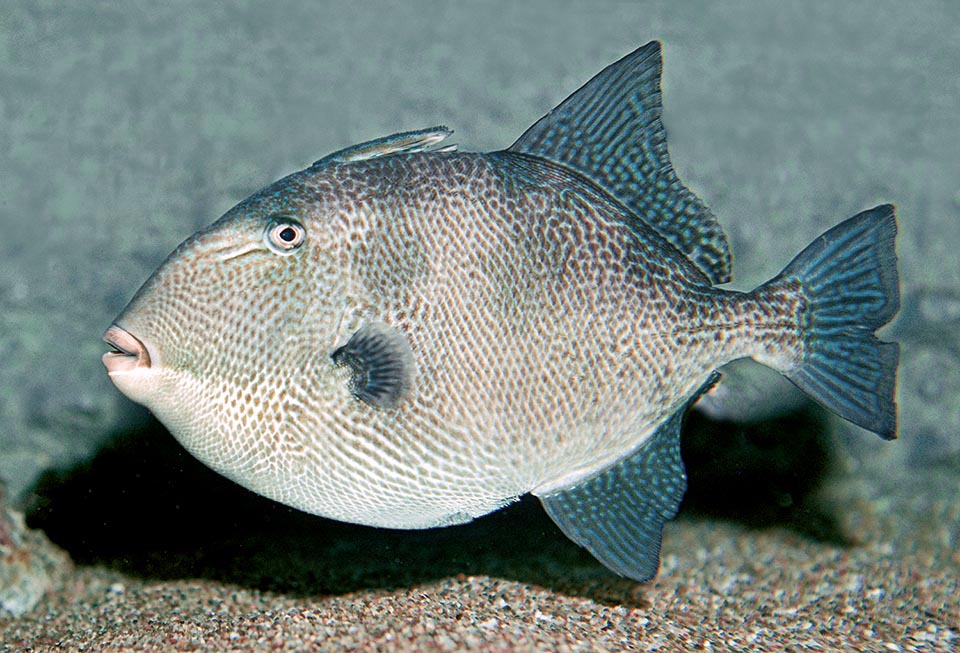 So, we find it usually in the first 50 m of depth, with a maximum of 100, also along the coasts of Canada, in the Gulf of Mexico and in the Caribbean Sea up to Brazil © Giuseppe Mazza

Carried by the Gulf Stream, it has been fished also along the Belgian, English and Irish coasts, thus marking the conquest of the northern limit for the family of the balistids.

It swims up to 100 m of depth, but rarely going down under the 50 m, along the coasts but also offshore, behind the schools of oily fishes. 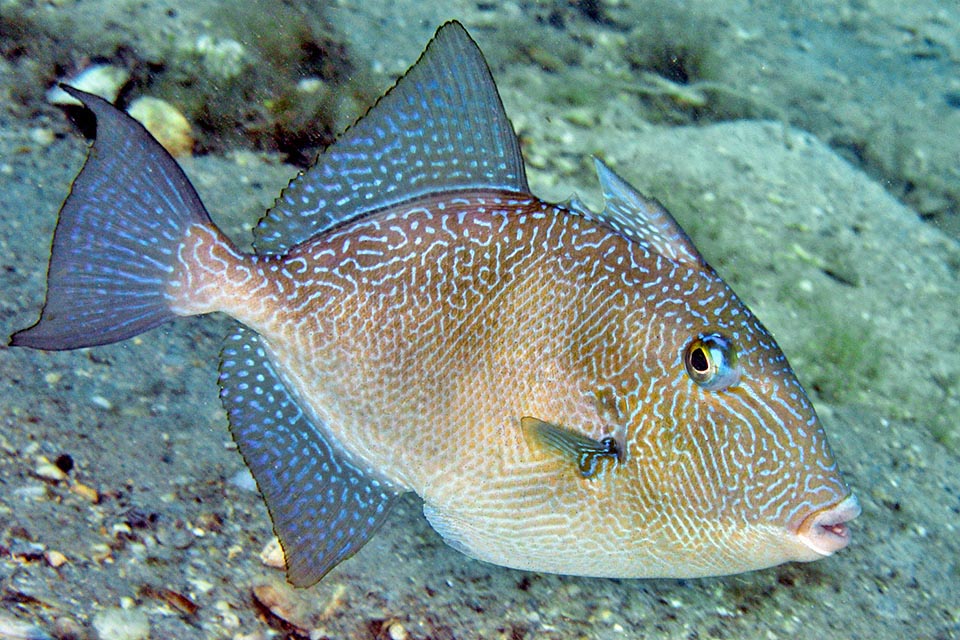 Up to 60 cm long, it eats small fishes, especially those living in schools like the sardines, as well as sea urchins, crustaceans and shells it crushes with its strong teeth © Kevin Bryant

It can reach the 60 cm of length, but rarely exceeds the half metre. The body is oval, tall, very flat, covered by bony scales arranged in lozenge thus to form a cuirass.

On the back we note the trigger, typical of the Balistidae, formed by three spines blockable in erect position. For lowering the first, long and sharp, it is necessary to act on the third, freeing the second, which holds, with an interlocking hole, the base of the spike. 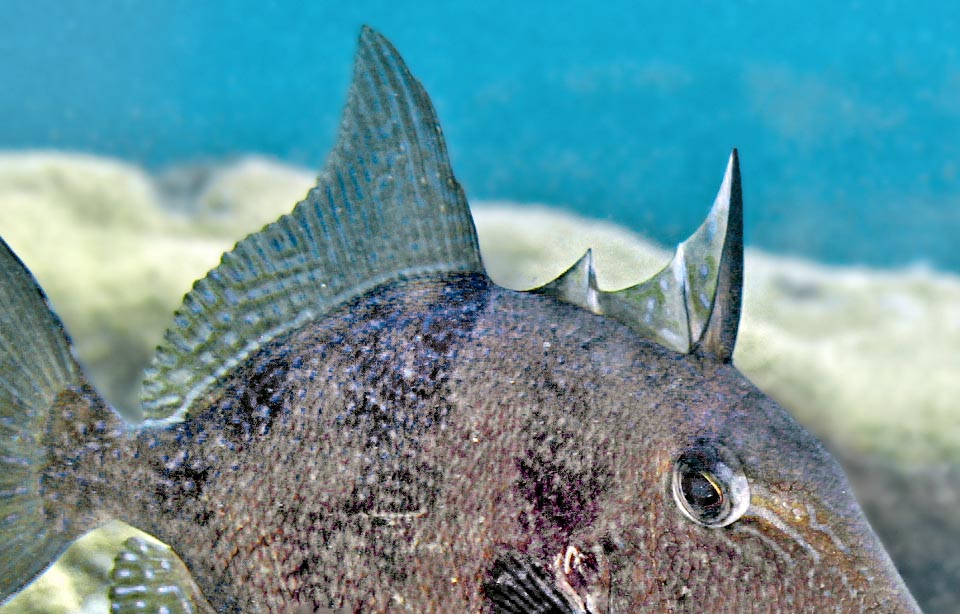 The first dorsal fin has a long spine as sharp as a dagger that can be blocked erect and remains so even if fish passes away. Besides tearing apart the stomach of predators, it allows to enter low-spined in grottoes with small openings, where, raising it, can sleep peacefully without the risk of being dragged out by the currents © Kevin Bryant

This is an important deterrent for the predators because also after the death of the fish, the dagger keeps blocked vertically and it is difficult to swallow the prey without getting injured.

Furthermore, when the Balistes capriscus finds a cavity with a narrow entrance, where it can enter only with lowered fin, it can adopt it as den and sleep peacefully with the trigger erect without the risk of being carried out by the currents or being caught sleeping by big predators such as the Thunnus albacares, the Acanthocybium solandri, or the Coryphaena hippurus. 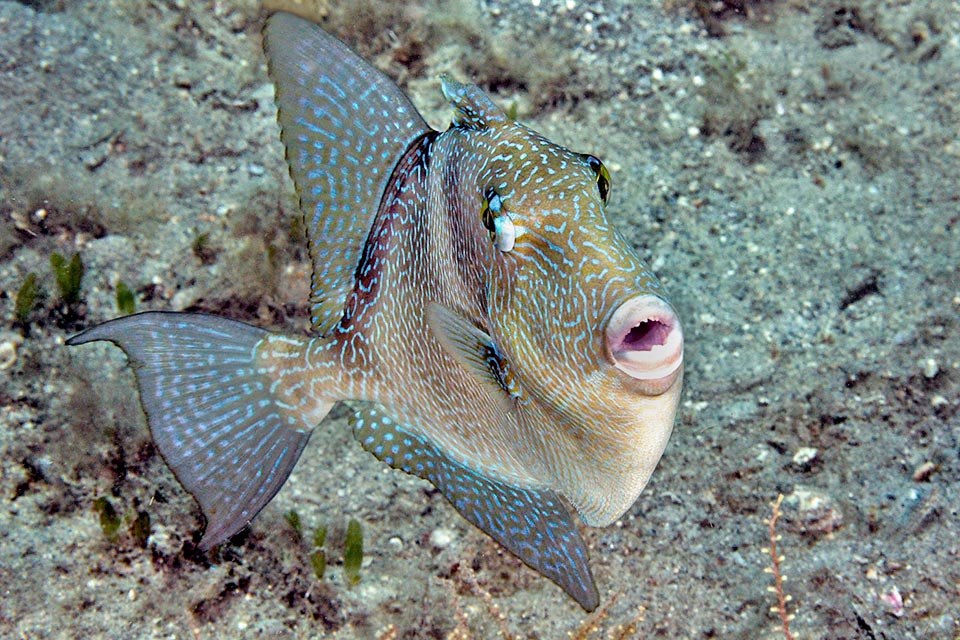 For reproduction the female digs a deep nest into the sand and keeps watch, at times together with the male. They ferociously attack whoever approaches them. In France it has also happened to unwary bathers. The fecundated eggs hatch after 50-55 hours. The larvae are 1,7 mm long and carry on a long planktonic life © Kevin Bryant

The pectoral ones have 14-15 unarmed rays; the ventral ones, atrophied, have transformed in a mobile wrinkly plate and a dozen of small spines kept united by a membrane; the caudal, rounded in the juveniles, gets truncated in the adults and crescent-shaped in the oldest specimens with two showy filaments.

The eyes and the mouth are decidedly small in comparison to the body, but the sight is excellent and the solid sharp teeth easily break the cuirasses of the sea urchins and the shells of the molluscs.

Compared to the fanciful colours of the other members of the family, the livery of the Balistes capriscus is much sober. Usually, the dominant tint is the lead-grey, paler on the belly, with light blue, greenish or violaceous reflections. 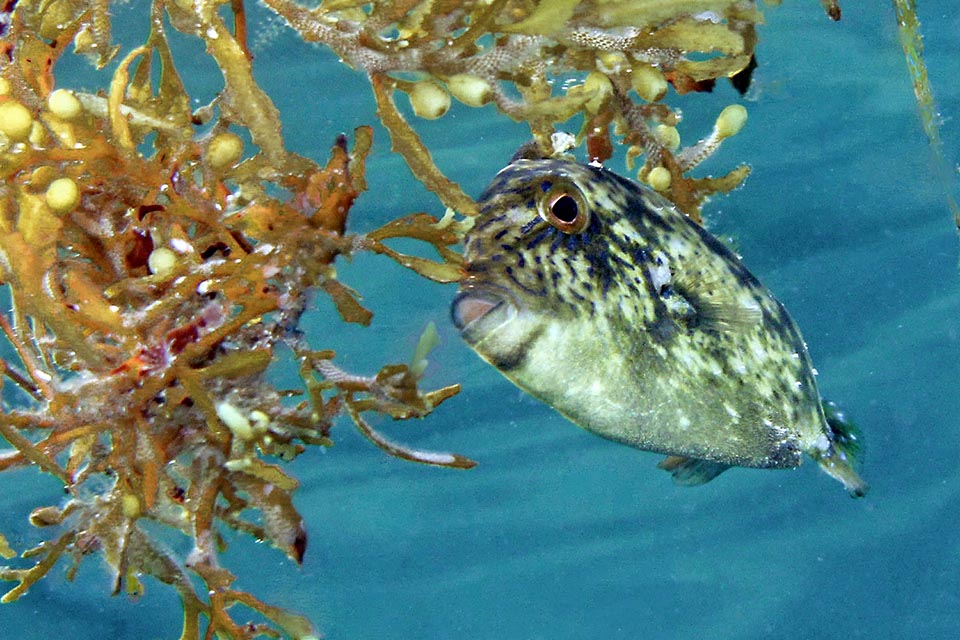 The juveniles have a less uniform livery. Like this one, they often grow camouflaged among the floating sargasso formations rich in small preys © Kevin Bryant

The grey triggerfish nourishes of echinoderms, crustaceans, molluscs and fishes. In many zones the main course is in fact formed by the schools of sardines and of silversides or of the small fishes swimming among the corals. It is pointless to say that it has a fondness for the mussels and the oysters and that, in the Mediterranean, is not, and by sure, loved by the oyster farmers.

It lives solitary or in small schools. 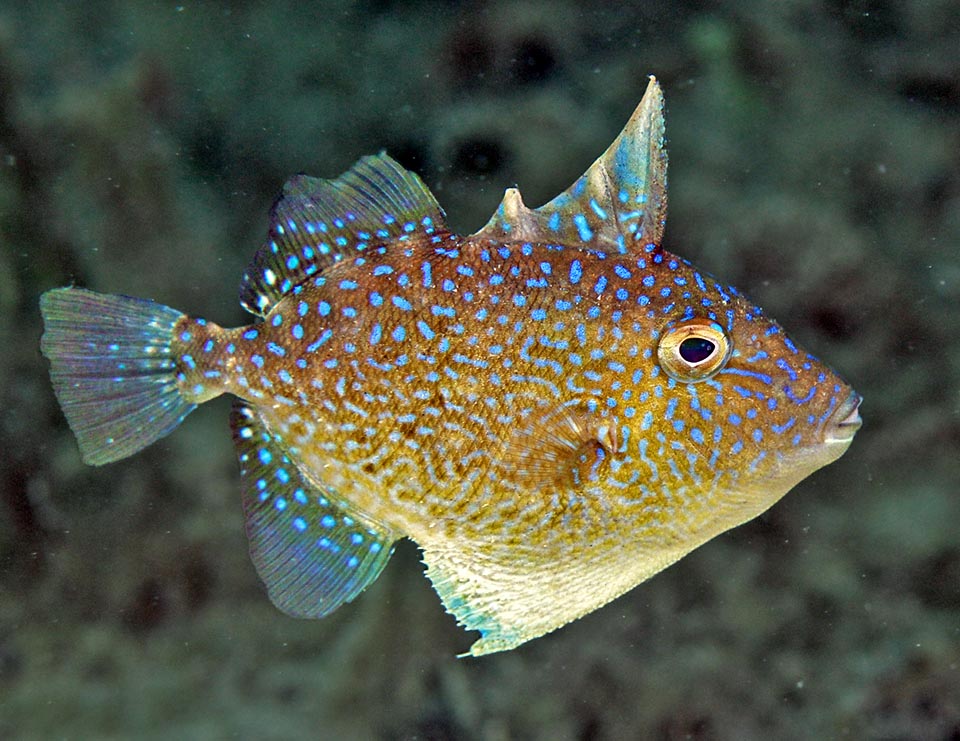 They are much more colourful than adults. This juvenile has already learnt to display its defensive dagger and to spread out downwards the pointed belly to look bigger © Kevin Bryant

During the reproductive period, under the satisfied eyes of the male, the female digs for 2-3 days a deep nest in the sand, blowing it away with water jets from the mouth and carrying away the stones with the teeth.

The fecundated eggs hatch after 50-55 hours and the planktonic larvae measure 1,7 mm.

The juveniles have a livery decidedly more coloured than the adults, brown with blue spots, and easily adapt to the aquarium life, passing, in appropriate pools, the 12 years of age. 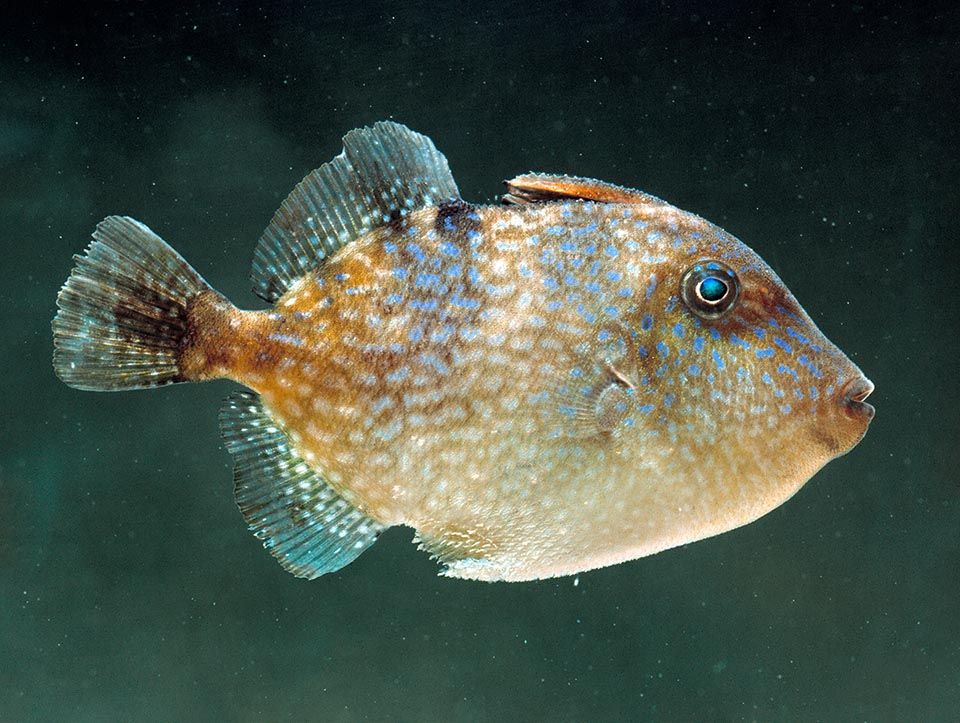 Here we note in blue the three irregular light vertical dark bands at times perceptible of the adults. In suitable pools Balistes capriscus may even exceed 12 years of age © Giuseppe Mazza

Not rarely, the adults end up into the trawls and the flesh, appreciated by the locals, is often consumed in the Caribbean and the Central America in spite of the risk of ciguatera, an alimentary intoxication related to the accumulation in their tissues of poisonous substances coming from a diet rich in fishes nourishing of corals or toxic algae.

The populations can double n 1,4-4,4 years and with a moderate fishing vulnerability index, of 31 per 100, the species is presently not endangered.