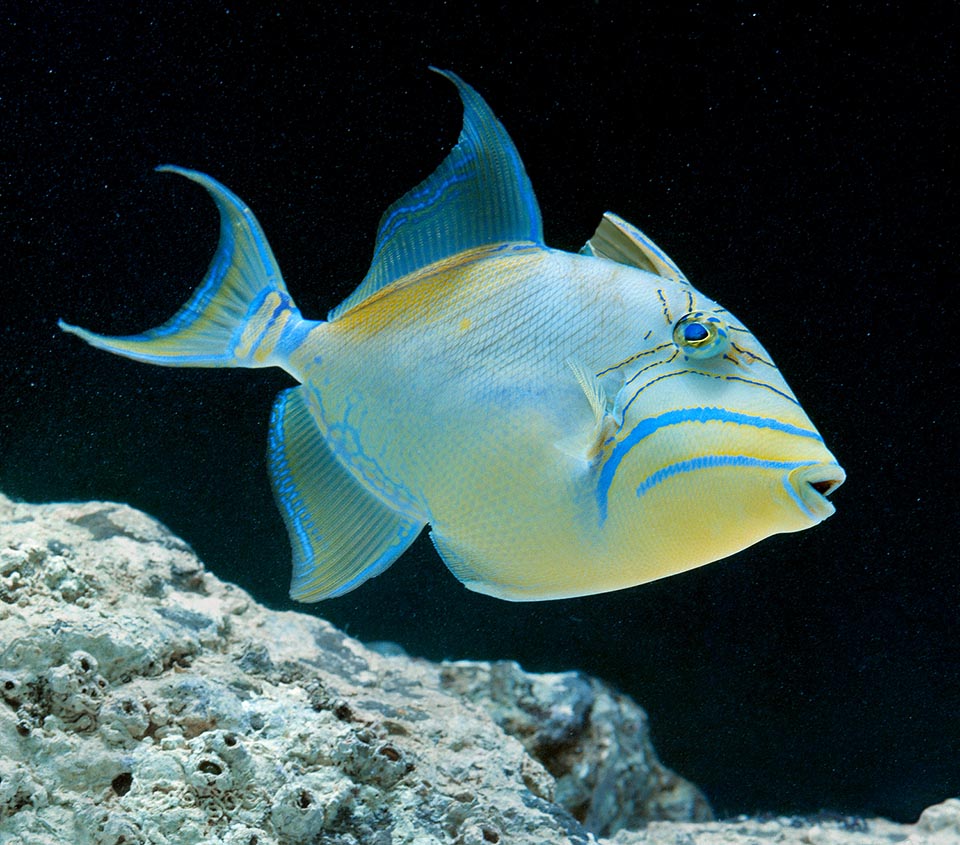 The Queen triggerfish (Balistes vetula Linnaeus, 1758) belongs to the class of the Actinopterygii, the ray-finned fishes, to the order of Tetraodontiformes and to the family Balistidae, the so-called triggerfishes.

The name of the genus Balistes comes from the “balista”, crossbow, with reference to this weapon due to the arcuate shape of the fins and the trigger, ready to spring, the fish has on the back.

The name of the species vetula  comes from the Latin “vetula”, little old lady, maybe due to the traits forming almost some wrinkles, especially close to the eyes. 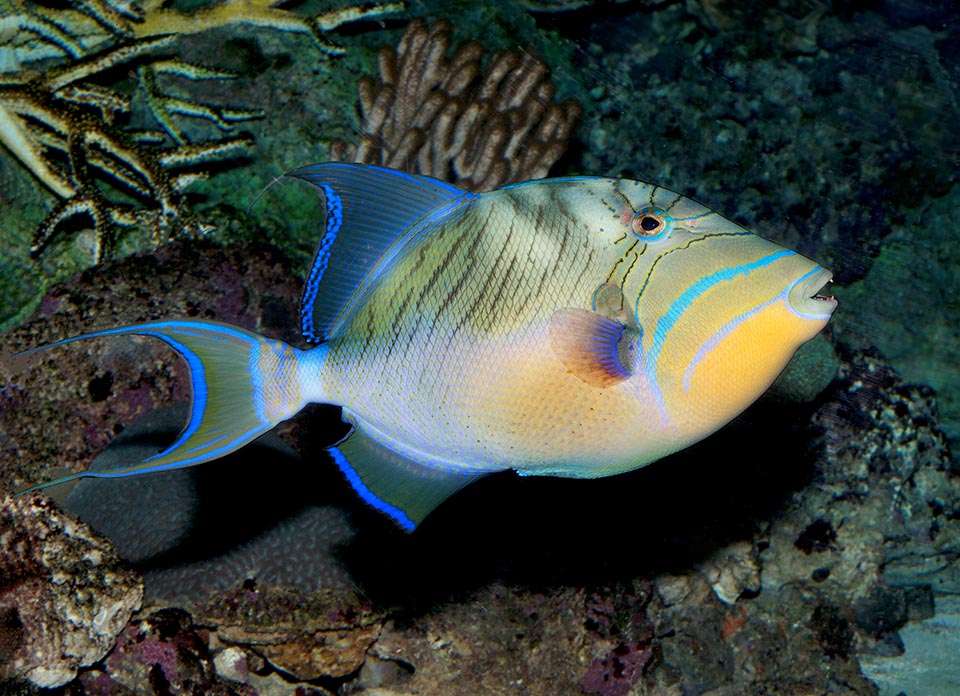 The quaint livery displays several lines similar to wrinkles, especially close to the eyes, that have earned this fish the specific Latin name of little old woman. The body and the fins often present blue, violet, green and turquoise hues, depending on the site where it lives, the fish mood and age, but the throat is always yellow © Giuseppe Mazza

It is at home in the tropical and temperate waters of the Atlantic Ocean.

We find it at Capo Verde, the Acores and along the African coasts from Morocco to Angola.

Then, at Ascension Island and on the other side of the ocean from Canada and the Gulf of Mexico and Caribbean up to Brazil. 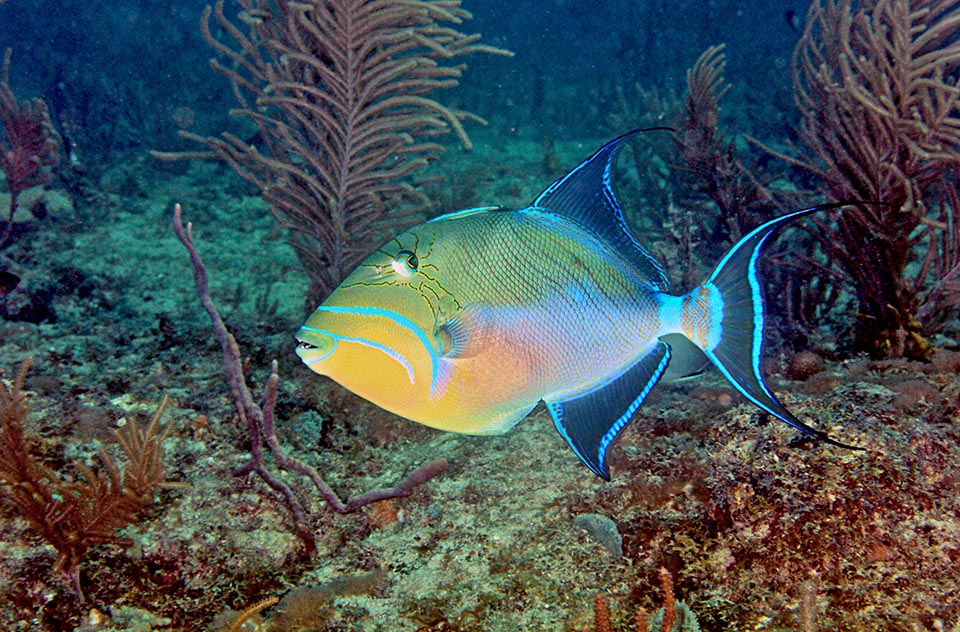 It can reach 60 cm of length and can go down up to 300 m of depth, even if it usually goes swimming between 5 and 30 m. Like chameleons, the eyes move independently © Kevin Bryant

It lives in the rocky and madreporic formations up to almost 300 m of depth, but usually is found between the 3 and the 30 m.

The queen triggerfish may reach the 60 cm. The body is fairly flat, shaped like a crossbow, with the eyes placed up on the head, independent from each other in the movements, like the chameleons. 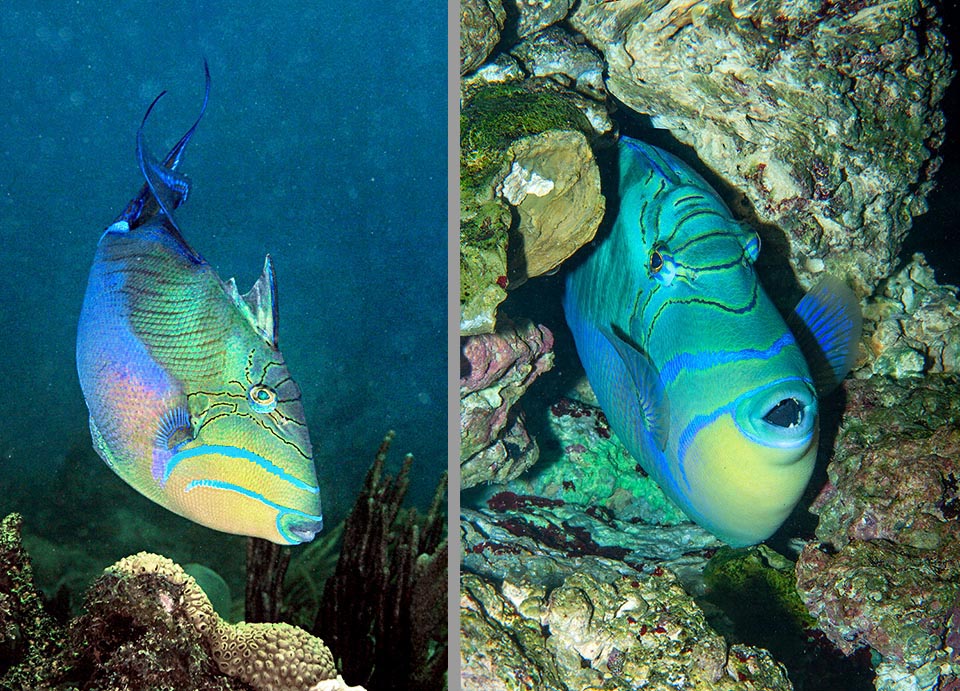 The spiny ray of the first dorsal fin may be blocked vertically like a dagger, and remains as such, even if the fish passes away, tearing open the stomach of the predators. It allows, by folding it up, to enter grottoes having a low way in. Then, once blocked, it can sleep peacefully without the risk of being dragged out by the currents © Kevin Bryant (left) and © Giuseppe Mazza (right)

On the back we note at once the famous erectile trigger formed by three spines. It is often folded, but the fish may shoot it out and block it in erect position in order to resist to the predators, wedged between the rocks or simply for calmly sleeping, without risking to be taken away by the currents, in grottos with narrow entrance, where the passage is possible only with the fin folded.

But the main function is of dissuasion: seen that it keeps open also when dead, it would not be by sure a nice experience for the tunas and sharks turning around. 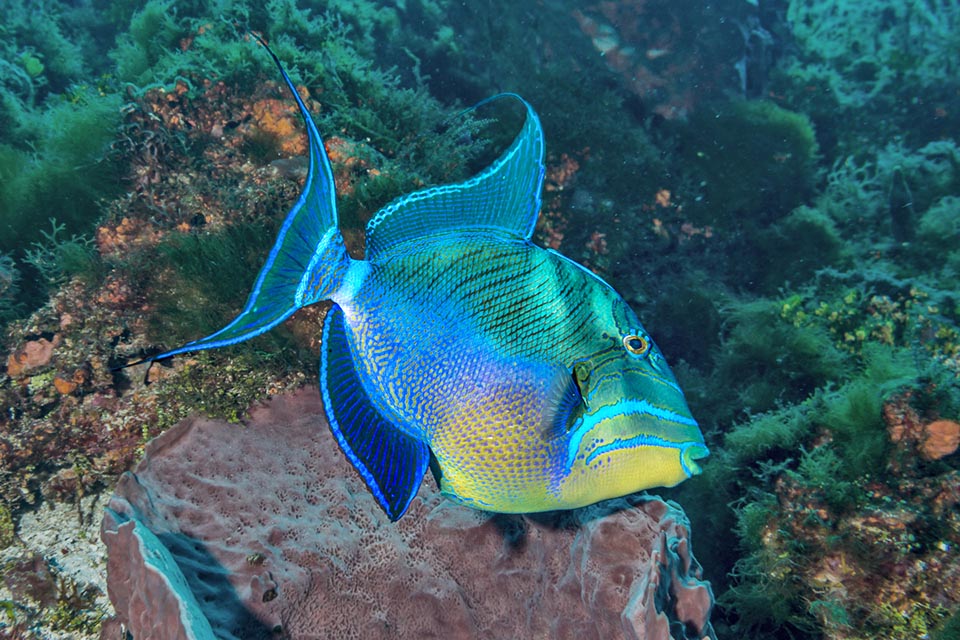 The caudal is lunate with elongated margins in the adults.

The body contains some blue, violet, green and turquoise, depending on the zone, the mood and the age of the fish.

In any case, the throat is yellow with two luminous blue traits over the mouth and lips equally circled by blue. 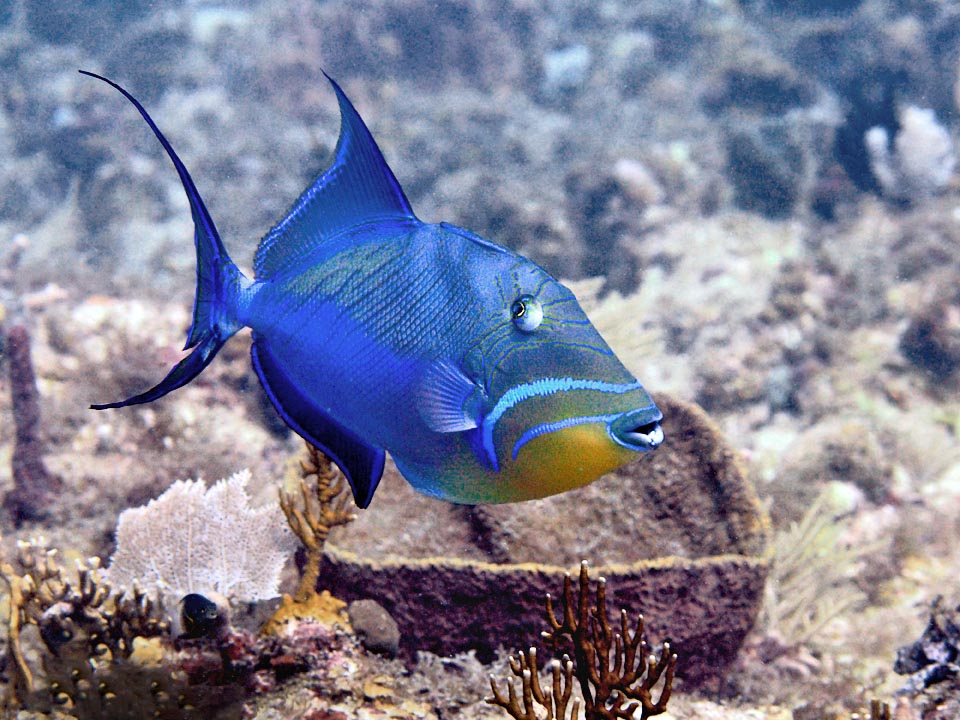 The mouth is robust, armed with 4 solid teeth, for piercing the shells of crustaceans, mollusks and sea urchins that spills so as not to get stung, with powerful water jets © Pauline Walsh Jacobson

Often are evident some dark oblique traits on the back and some more marked patterns spreading like wrinkles from the eyes, whence, as we said, the Latin epithet of little old lady. The mouth is robust, armed by solid incisors, good for holing shells, armours and importuners.

The queen triggerfish is found often in proximity of the bottom where it hunts crustaceans, molluscs and especially echinoderms. It loves the sea urchins and in particular the Diadema antillarum, that it finds in most of its biotope. 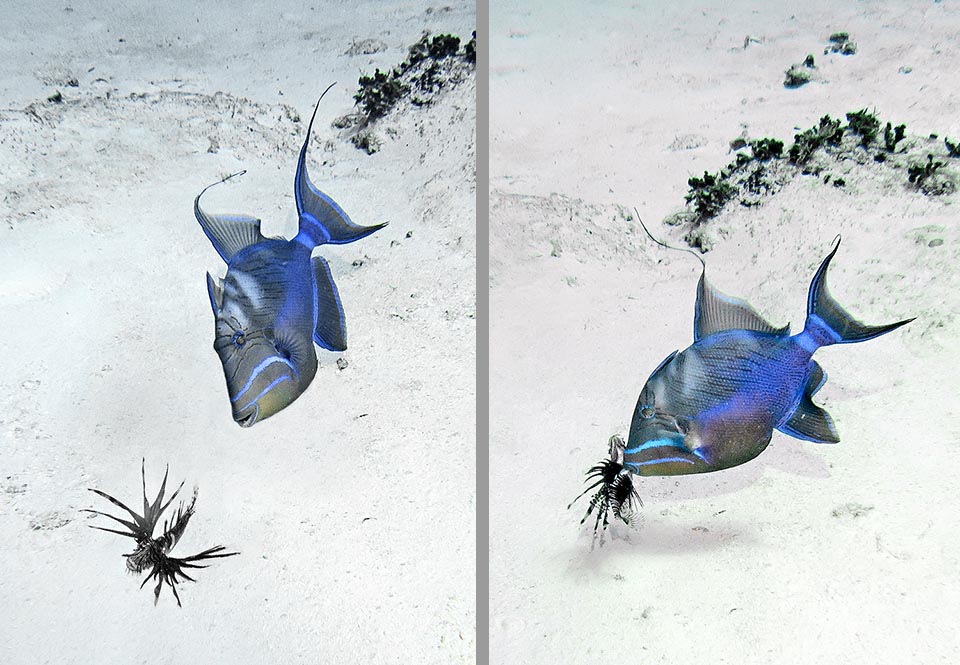 It eats also algae and does not ignore the fishes moving on the bottoms, like this unfortunate Pterois that has no escape © Al Dobbins

For eating it, uses its own technique: it turns it upside down, by blowing under it water with the mouth, and then attacks it ventrally without incurring the long spines. It seems that it does not disdain also some sea weeds.

The males are territorial. They control a zone of about 10 m and allow only the females to enter the same.

By the time of the reproduction they remove the sand of the bottom with the fins and strong jets of water, as for the sea urchin, in order to create a cavity shaped like a bowl. This is the nest where the female will spawn, the eggs being fecundated at once by the husband, and where, until the hatching, the spouses will keep watch sending away the importuners, scuba divers included, who often surface bleeding with deep bites. 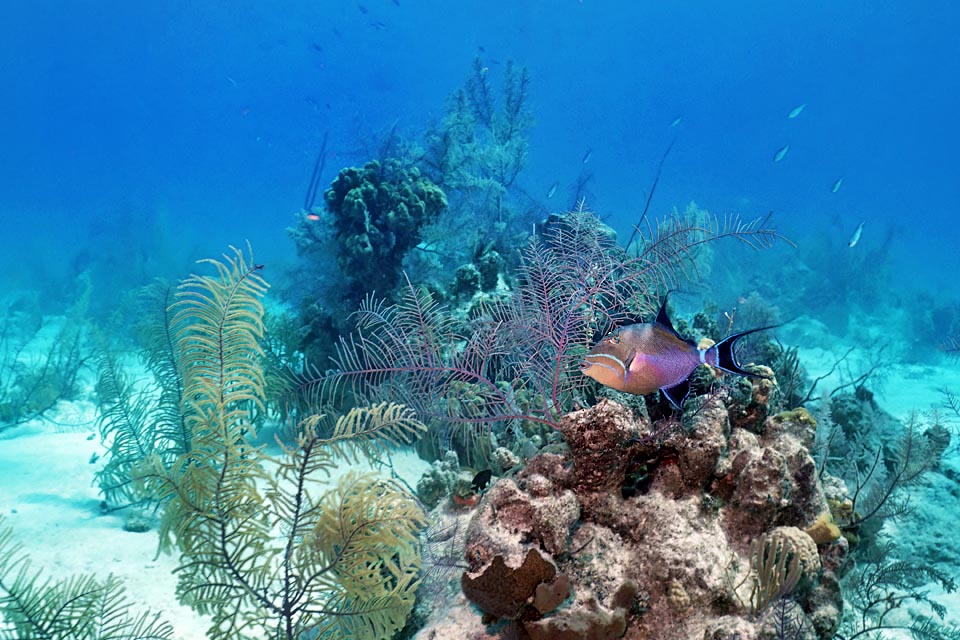 Males are territorial. They have a small 10 m kingdom where only females are allowed to enter. To get their attention they dig with water jets from the mouth, like for sea urchins, a nest for the eggs. As soon as comes a partner ready to spawn, they fecundate them and stand guard together until they hatch, biting ferociously the inopportune © Pauline Walsh Jacobson

Despite these cares, the species is endangered.

In fact, the queen triggerfish accidentally runs into the nets of the industrial fishing, and, aquaria apart, it is sought for its excellent flesh, even if some organs, such as the liver, are poisonous.

The populations could double in 1.4-4.4 years, but unfortunately the fishing vulnerability index is moderately high, already marking 36 on a scale of 100. 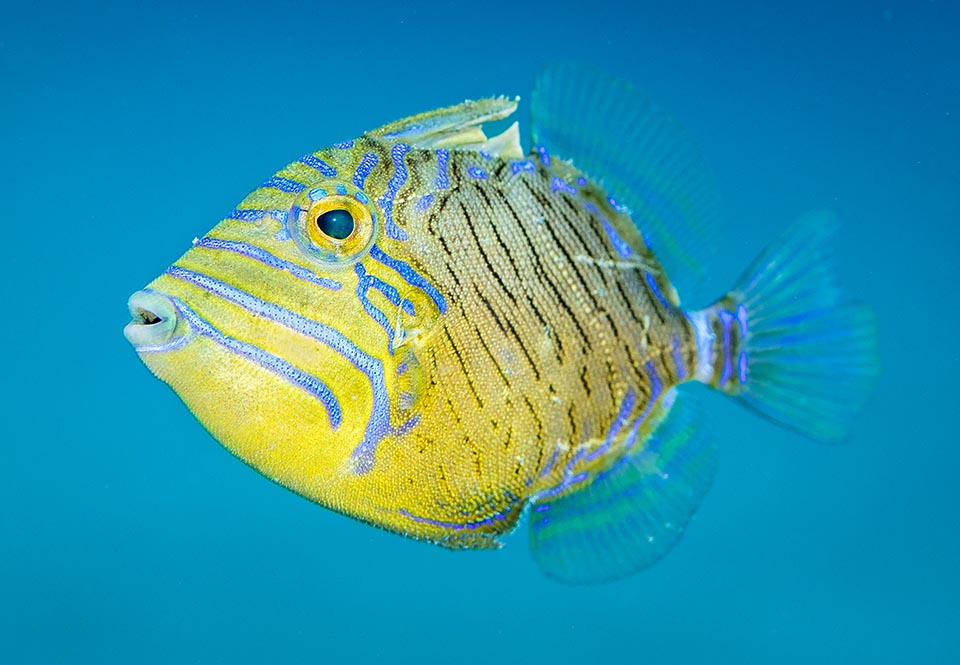