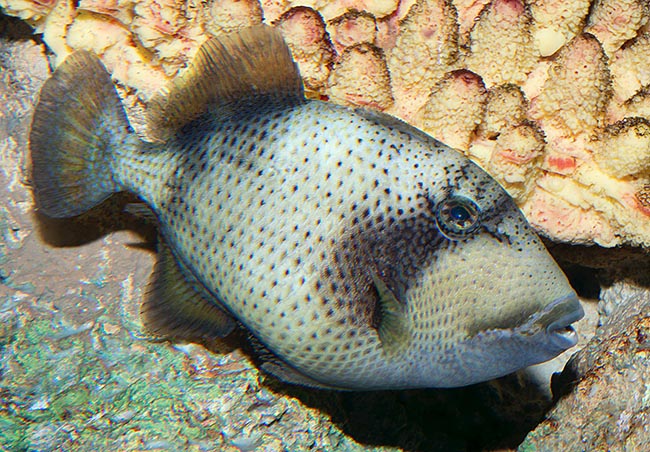 The Titan triggerfish (Balistoides viridescens Bloch & Schneider, 1801) belongs to the class of Actinopterygii, the ray-finned fishes, to the order of Tetraodontiformes and to the family of Balistids Balistidae, the well known triggerfishes.

The name of the species comes from the Latin “viridescens” = becoming green, with reference to the adult livery.

It is present in the Indo-Pacific tropical waters. As an indication, we find it, along the African coast, from Mozambique to the Red Sea, to the islands Seychelles, Mauritius, Réunion, Maldives, India, Sri Lanka, Thailand, Australia, Indonesia, New Guinea, Micronesia, Philippines, Taiwan and China up to Japan. Eastwards, it’s at home in Kiribati, Samoa, the Marquesas Islands and Tuamotu, but has not colonized the Hawaii. Southwards, it reaches Tonga and New Caledonia. 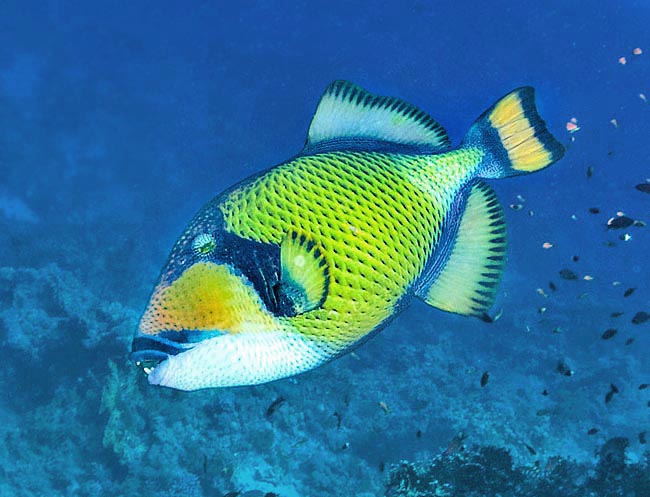 It lives inside the reef, in the still waters of the madreporic formations up to 50 m of depth.

With its 75 cm of length, it is the largest extant Balistidae The body is flat, ovoid, protected, like all triggerfishes by a solid coating of bony scales. These are scabrous with small spines bent forward close to the caudal peduncle.

The mouth, robust, is armed by solid incisors useful for breaking the endoskeletons of the sea urchins, of the crustaceans and of the molluscs, not to forget the madrepores it crumbles without any effort for eating their polyps. But, if it is the case, it does not ignore also the easy preys, such as the tubeworms. 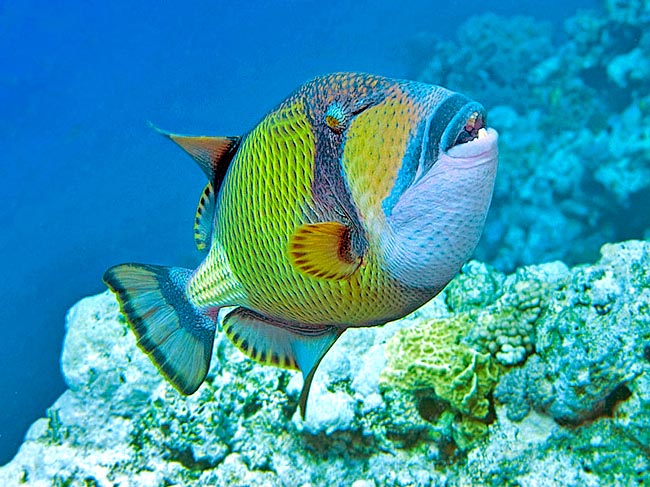 The mouth, robust, is armed by solid incisors useful for breaking the endoskeletons of the sea urchins, of the crustaceans and of the molluscs, not to forget the madrepores it crumbles without any effort for eating polyps © Gianni Neto

The livery is clear in the juveniles with a black dotting interesting the whole body but the under chin. From the eyes and the dorsal fin generate two dark zones, stronger in the adults, whilst the central part of the body colours of greenish yellow and the lips and under the chin become blue. The fins are brown-yellowish or reddish with dark edge.

When it crumbles the madrepores, the titan triggerfish reveals also to be charitable, as it is surrounded by small fishes who take advantage from the waste. It is not particularly aggressive, but during the reproductive time, till the hatching, the females keep the watch to the nest dug into the sand and do not hesitate in ferociously biting the intruders. If caught in the nets, seen its size, the titan triggerfish is often consumed by the fishermen, careless of the risk of ciguatera, an intoxication linked to the possible presence of poisonous organisms in their diet. The growth of the populations is quite slow. They talk of 4,5-14 years for doubling in optimal conditions; it is not surprising, therefore, that the vulnerability index of the species is fairly high: 54 on 100.