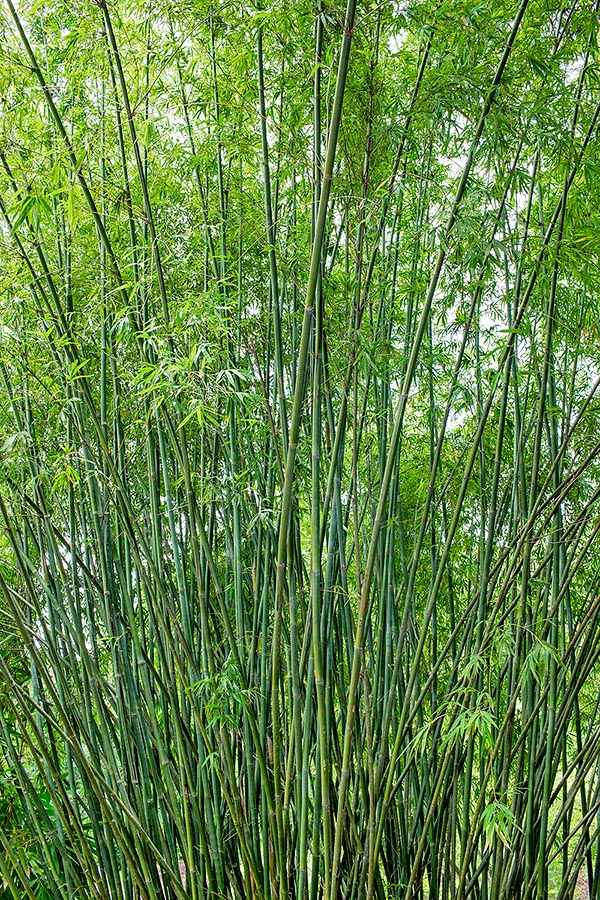 Bambusa textilis is an evergreen rhizomatous perennial species native to China and Vietnam forming compact tufts erect up to almost the apex, 6-15 m long and 2,5-5 cm broad. Fast growing bamboo, among the most elegant and ornamental of the genus, grown also in non tropical climates with several varieties. The most known is the here shown ‘Gracilis’, that resists with no damages up to -8 °C © Giuseppe Mazza

The species is native to China (Anhui, Guangdong and Guangxi) and Vietnam where it grows mainly along the banks of the water streams at low altitudes.

The name of the genus comes from the local Malay name “bambu”; the specific name is the Latin substantive “textilis, e” = tissue, with reference to the thin and resistant fibres that may be gotten from the stems.

The Bambusa textilis McClure (1940) is an evergreen rhizomatous perennial species forming compact tufts with erect stems (culms), slightly curved at the apex, 6-15 m long and of 2,5-5 cm of diameter, of green colour, initially covered by a white-bluish pruina.

The culms are hollow between the nodes, spaced of 40-70 cm, with 0,2-0,5 cm thick walls, initially protected by deciduous ovato-lanceolate bracts covered by bristly brown hairs.

Ramifications grouped at the nodes, except in the lower part per about ¼ of the length, of which one predominant, with 8-12 alternate leaves, linear-lanceolate with long pointed apex and rough margins, 7-18 cm long and 1-2 cm broad, hairless above, pubescent below.

It reproduces by seed, but usually by division and stem cutting, utlizing one portion with two-three nodes, planted obliquely or vertically into a sandy substratum rich of organic substance maintained humid at the temperature of 24-26 °C.

Fast growing bamboo among the most elegant and ornamental of the genus, together with its numerous varieties, the most popular being the ‘Gracilis’, cultivable in the tropical, subtropical and temperate climate zones, where it can resist without damages up to about -8 °C. 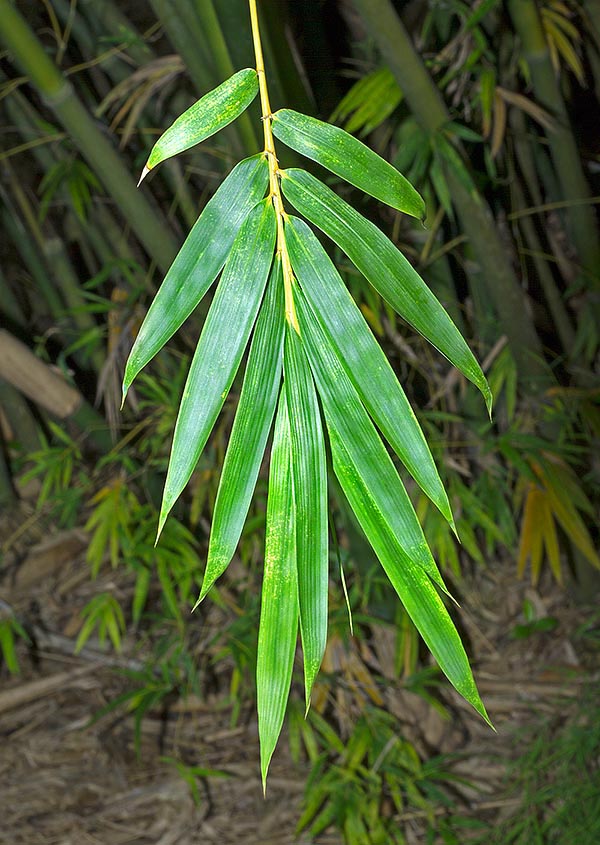 The siliceous secretion collected from the internodes is used in the Chinese traditional medicine. Laboratory studies have shown in the leaves extracts numerous bioactive compounds © Giuseppe Mazza

Of great effect as isolated group or for screens and wind and border barriers, utilizable also in gardens of modest size being not invasive and in any case easy to control.

For a thick vegetation requires full sun, or at the most a slight shade, and draining, fertile soils, maintained constantly humid, even if, well rooted, can bear dry periods.

Monthly fertilizations from spring to autumn utilizing preferably a balanced product with microelements.

It can be cultivated in capacious containers for the decoration of open spaces, winter gardens and ample and luminous indoors, utilizing a draining loam rich of organic substance maintained constantly humid, but without stagnations.

The culms are employed for fabricating furniture, tools and handicrafts; the fibres, easily obtained from the thin walls, resistant and flexible, can be woven and intertwined for various uses.

The siliceous secretion collected from the internodes (known in the pharmacopoeia as “Concretio silicea bambusae”) is utilized in the traditional Chinese medicine in the infantile convulsions.

Laboratory studies have evidenced in the extracts of the leaves numerous bioactive compounds with antioxidant properties worthy of further investigations for a possible use in the official medicine.