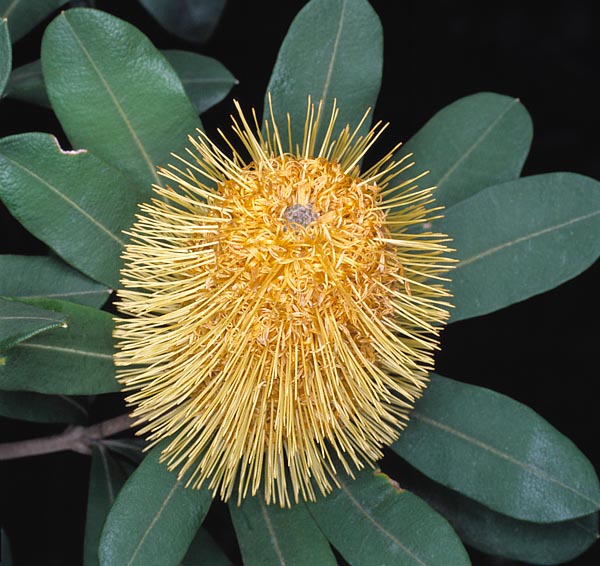 The species is native to the south-eastern coasts of Australia, where it lives in the open forests on various types of soil, sandy, clayey, of granitic and basaltic origin, from the sea level up to about 1500 m of altitude.

The genus is honoured to the botanist and naturalist Joseph Banks (1743-1820) who took part to the scientific expedition (1768-1771) of Capt. James Cook on the Endeavour; the name of the species is the combination of the Latin adjective “integer, -gra, -grum” = entire and of the substantive “folium” = leaf, with reference to the entire margins.

The Banksia integrifolia L.f. (1782) is an up to about 20 m tall tree with dark and fissured bark and often contorted branches.

The leaves, placed in verticils of 4-6, more or less perfect, are dark green coloured and are waxy above, covered by a thick white tomentum below, of oblong-lanceolate shape, the young ones have toothed margin, the adult entire, 4-20 cm long and 1-3,5 cm broad.

Cylindrical terminal inflorescences, 6-12 cm long and of 5 cm of diameter, carrying a crowd of flowers, rich in nectar, with 2,2-2,5 cm long tubular perianth formed by four fused tepals of pale yellow to yellow colour and a long style having the same colour. The fruits are dark grey follicles when ripe containing one or two ovate, winged, black seeds, 1,7 cm long and 0,8 cm broad, which are often spontaneously released.

Like other Proteaceae, in poor soils the rooting apparatus develops thick clusters of lateral rootlets, called proteoid, exuding organic acids, mainly citric and malic which solubilise the inorganic phosphorus and allow the absorption of elements, such as the iron, otherwise not available. It does reproduce by seed, without any particular pre-treatment, employing 3 to 8 weeks for germinating, at the temperature of 20-22 °C, and 4-5 or more years for the first flowering, to be placed in sandy loam kept humid. There are two recognized subspecies: Banksia integrifolia subsp. aquilonia (A.S.George) K.R.Thiele (1994) and Banksia integrifolia subsp. compar (R.Br.) K.R.Thiele (1994).

Very popular species, especially in Australia, due to its remarkable versatility, coming from areas with quite different climates, from the warm temperate with dry winters and rainy summers to the humid tropical with rains distributed almost uniformly all over the year, and different types of soil, from the sandy to the heavy clayey ones, from acidic to slightly alkaline. Furthermore, it does resist to the wind and the saltiness, so it can be cultivated in windy coastal zones, where it assumes the appearance of a low shrub; dry, it stands lower temperatures up to about -4 °C, for a very short period.

It is not sensitive to the presence of phosphorus, as is the case of other species of Banksia and due to its resistance to the radical rottenness it is utilized as rootstock for sensitive species; finally, it resists to the fire thanks to the presence of the lignotuber, upper part of the root, enlarged and lignified, which allows the plant to regenerate after the fires.