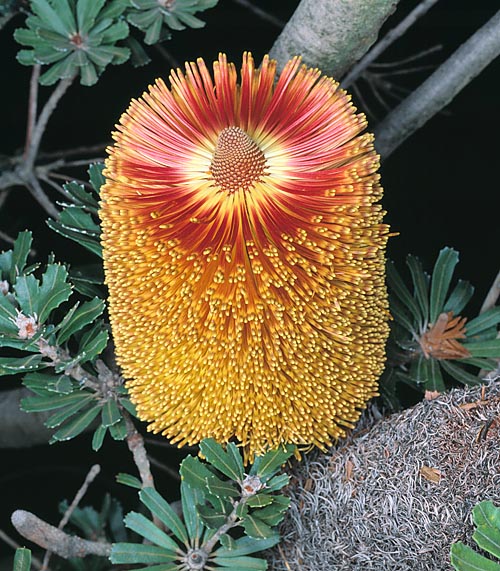 The species is native to south-western Australia where it grows on the sand dunes close to the city of Albany.

The genus is honoured to the botanist and naturalist Joseph Banks (1743-1820) who took part to the scientific expedition (1768-1771) of Capt. James Cook on the Endeavour; the name of the species is the past participle of the Latin verb “praemordeo” = to bite at the end, with reference to the appearance of the leaves apex.

The Banksia praemorsa Andrews (1802) is a much ramified and compact evergreen shrub up to about 4 m tall, with tomentose young branches.

The leaves, on an about 0,5 cm long petiole, are rigid, oblong with cuneate base, 3-6 cm long and 1-2 cm broad, with margins serrate-dentate in the upper half, entire in the lower one, and truncated apex, of intense green colour on the upper page, whitish below.

The inflorescences are terminal, cylindrical, 10-32 cm long and of 10 cm of diameter, carrying a crowd of coupled flowers with tubular, filiform perianth, 3-4 cm long, of wine red or greenish yellow colour, divided in the second half into 4 segments, and little longer filiform style.

The fruits are ellipsoid woody follicles about 2 cm long and 1 cm broad whose opening, and resulting release of the seeds is usually caused by the periodical fires taking place in the region. It reproduces by seed, without any particular pre-treatment, which takes 4 to 10 weeks for germinating, at the temperature of 18-22 °C, to be placed into sandy loam kept humid until the germination, preferably using single containers, being rather sensitive to the transplant; the reproduction by cutting is fairly difficult.

Of remarkable ornamental effect thanks to the foliage and the big long-lasting inflorescences, it requires a Mediterranean type climate with mild winters and long and dry summers, when dry it stands lower temperatures up to about -4 °C, for a very short period, it resists to the wind, the salt spray and, well rooted, to periods of drought.

It is cultivable in full sun in even poor soils, provided well drained, preferably sandy, acidic, neutral or slightly alkaline and with low levels of phosphorus, therefore it is necessary to avoid the utilization of fertilizers containing the same.

Ideal for Mediterranean type gardens as isolated specimen or for fences, also windbreaks, but is cultivable also in zones with humid summer climate, unlike other species coming from western Australia.

Light prunings can aver useful for getting a more compact habit, to be done in the part of the branches provided with leaves, as they would not ramify under. It does not resist to the fire, having no lignotuber, the upper part of the root, enlarged and lignified, which allows the plant to regenerate after the fires. The inflorescences are long-lasting even when cut, suitable therefore for being utilized in the floral compositions.