The species is native to Peninsular Malaysia and Sumatra where it grows at the margins of the humid forests and along the water streams, climbing on the trees, at low and medium altitudes.

The genus is honoured to the brothers Jean (1541-1613) and Gaspard (1560-1624) Bauhin, Swiss botanists, for the bilobed leaves; the name of the species is the combination of the Latin adverb “bis” = twice and of the adjective “dentatus, a, um”, with reference to the bifid apex of the leaves.

The Bauhinia bidentata Jack (1822) is an evergreen, perennial woody climber which may grow up to 12 m anchoring on the supports by means simple cirri, with brownish bark and young branches covered by reddish tomentum. The leaves, on a 4-8 cm long petiole, are alternate, cordate, with pointed bifid apex, unlike the classical bilobed shape typical of the genus, 7-12 cm long and 4-9 cm broad, glabrous on the upper page, slightly villous below, initially reddish, then intense green. 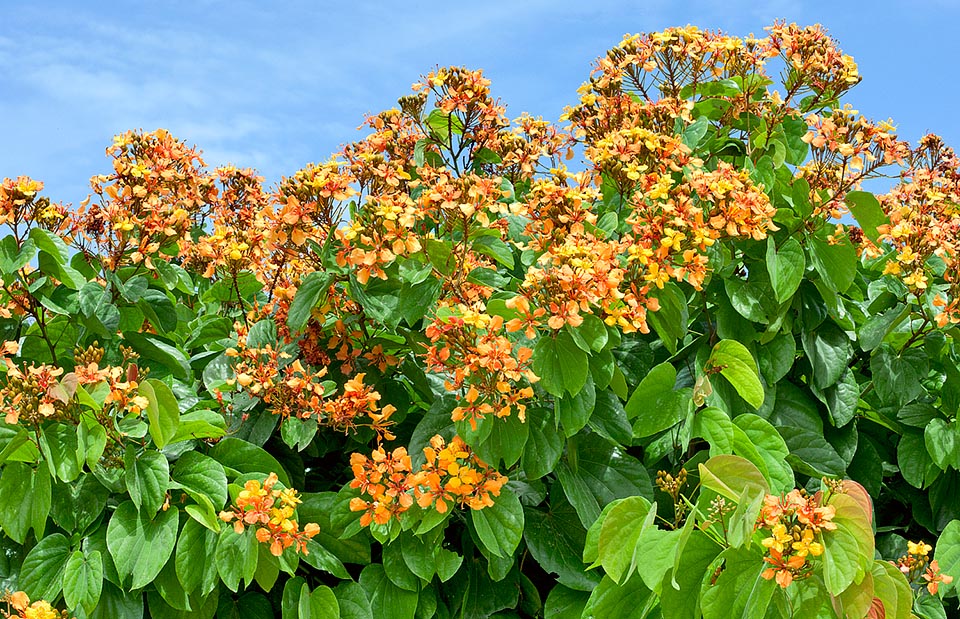 Native to Peninsular Malaysia and Sumatra, Bauhinia bidentata is a woody climber that can be 12 m tall anchoring to supports with solid cirri © Giuseppe Mazza

Terminal corymbose inflorescences carrying numerous hermaphroditic flowers with tomentose calyx and corolla with 5 petals, 1,5-2,2 cm long, nearly equal, unguiculate (petals with the long restricted base similar to a stem), with oval edge with wavy margin, of initially orange colour then tending red orange, with 8 stamina, of which the three upper ones are longer and fertile, the others are sterile.

It propagates by seed, scarified and kept in water for 24 hours, in order to accelerate its germination, before to be interred in organic loam with addition of siliceous sand or agri-perlite maintained humid at the temperature of 22-24 °C; it reproduces also by cutting and grafting.

Vigorous and fast growing climber of great ornamental and landscaping value due to the luxuriant foliage and the showy long-lasting blooming, from spring to autumn, cultivable only in the humid tropical and subtropical climate zones, where values of temperature of less than 5 °C are exceptional events and of extremely short duration. 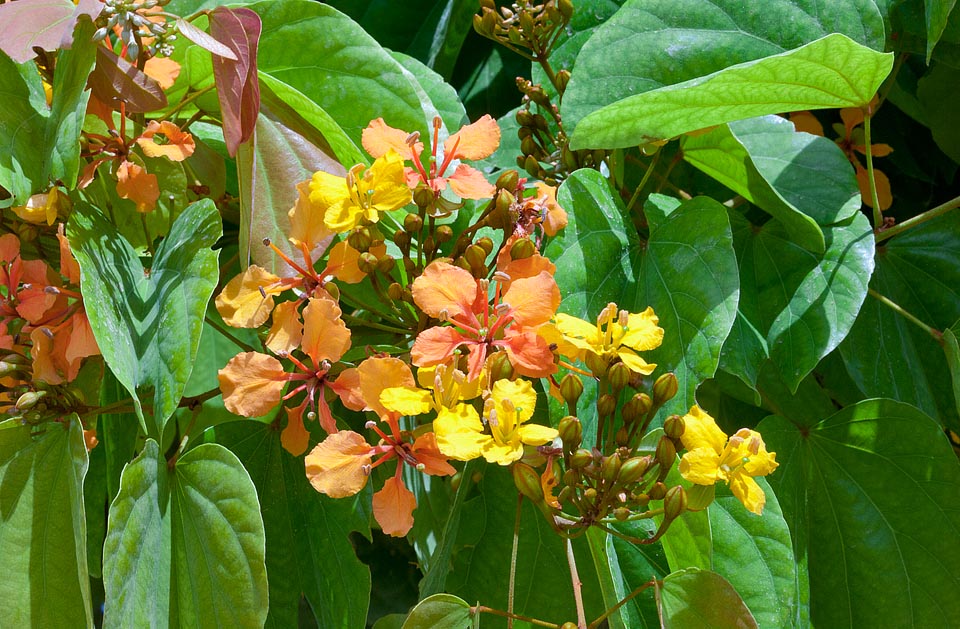 The petals of the rich corymbose inflorescences turn from yellow-orange to red-orange. Leaves and roots are used in traditional medicine for various pathologies © G. Mazza

It requires an exposition in full sun in order to better blooming, fertile and well drained soils, preferably acidic or neutral, and regular and abundant waterings. Suitable for covering fences, trellises, pergolas or, as in the wild, for climbing on the trees; useful are the prunings, to be done after the blooming, for keeping compact its posture and encouraging the formation of new floriferous branches.

Where the climate does not allow the permanence with continuity in open air, it can be cultivated in capacious containers utilizing loam rich of organic substance with addition of siliceous sand or perlite per about the 30%, in order to be sheltered during the coldest months in an as much as possible luminous location with temperatures not under the 15 °C; the waterings must be regular in summer, more spaced in winter, but without allowing the substratum to completely dry up, and the fertilizations done with balanced products with addition of microelements.

The leaves and the roots are utilized in the traditional medicine for various pathologies.