The species is native to Indonesia and Malaysia where it grows, climber, in the pluvial forests until it covers the crowns of the trees. 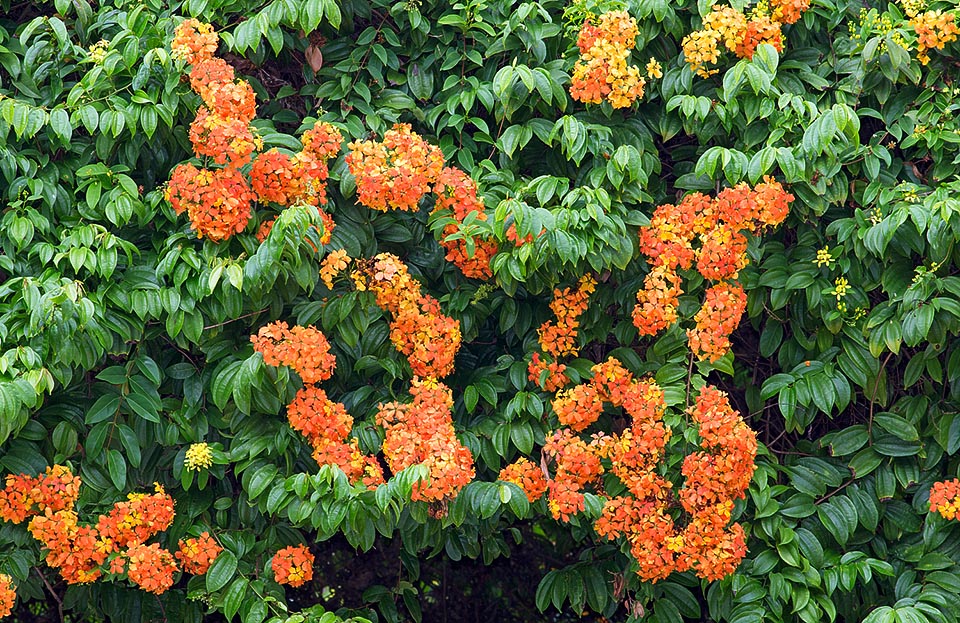 The Bauhinia kockiana Korth. (1839) is an evergreen or semi-deciduous woody climber with up to about 30 m long stems, even if in cultivation it keeps more contained, which anchors on the supports by means of tendrils; the young branches are reddish brown, tomentose, then glabrous. The leaves, on an about 2 cm long petiole, are alternate, simple, unlike the classical bilobed shape typical of the genus, ovate to elliptic with long pointed apex, 7-14 cm long and 4-6 cm broad, of glossy green colour, usually with two nervations at the sides of the central one which from the base reach the apex. 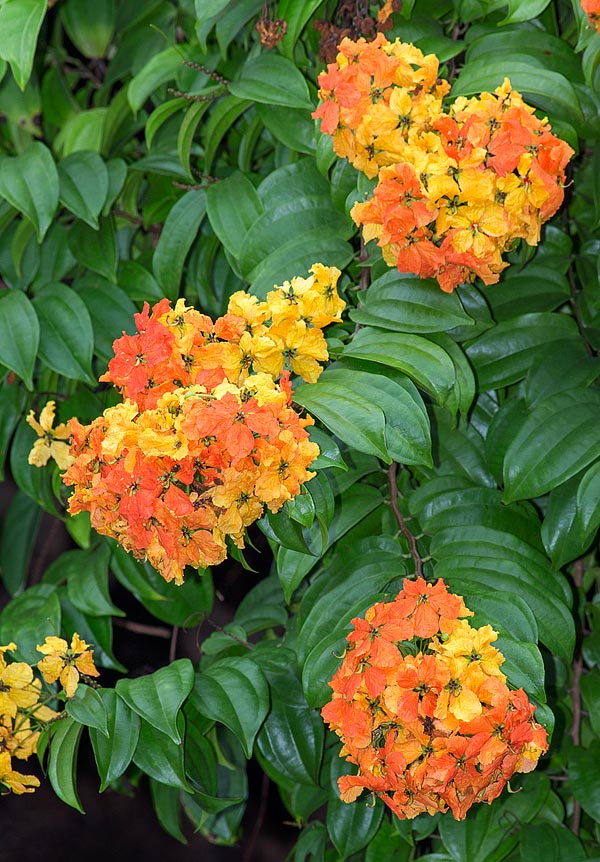 Corymbose terminal and lateral inflorescences carrying hermaphrodite flowers with 5 unguiculate petals (petals with long narrow base similar to a stem), 2-2,5 cm long, with oval edge having undulated margin, of colour turning, with the time, from yellow to orange tending red, and three fertile stamina; as the flowers open in succession and are long-lasting, these colours coexist in the inflorescence. The fruits are dehiscent legumes (opening spontaneously when ripe), woody and flat, up to about 15 cm long, containing 1-4 roundish flat dark brown seeds, of about 2 cm of diameter.

It propagates by seed, rarely produced in cultivation, which has to be interred as soon as possible, having a very limited time of germination, utilizing an organic loam with addition of siliceous sand or perlite kept humid with non-calcareous water, at the temperature of 24-28 °C, which germinates in 2-4 weeks; it reproduces also by woody cutting, even if rather difficult to be rooted, and, most frequently, by air layering, the plants reproduced by seed and cutting may take some years before blooming.

Vigorous and fast growing specie with luxuriant foliage and showy blooming, prolonging almost during the whole year, considered as standing among the most ornamental of the genus, requires a markedly tropical climate with high temperatures and humidity constant all the year round, exposition in full sun, for the best blooming, fertile and well drained soils, preferably acidic, and regular and abundant irrigations.

It is suitable for covering fences, trellises, pergolas or, like in the wild, for climbing on the trees; the prunings are useful, to be done after the blooming, for keeping compact its posture and encouraging the formation of new floriferous branches. Where the climate does not allow the permanent cultivation in open air, it can be cultivated in pot, and then to be sheltered during the coldest months in an as much as possible luminous location with temperatures not under the 16 °C, utilizing a loam rich of organic substance with addition of siliceous sand or perlite per about the 30%; the waterings must be regular, but without stagnations, and the fertilizations to be done with balanced products with addition of microelements.