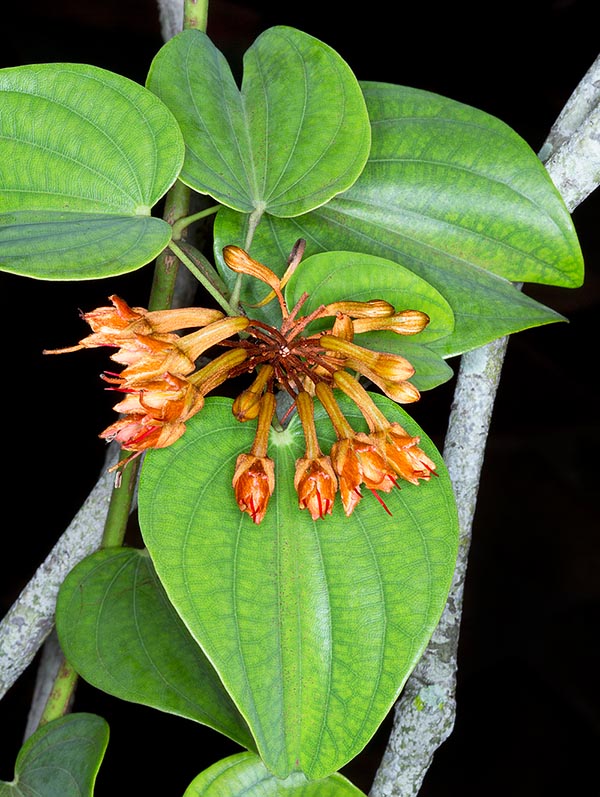 The species is native to north-eastern Thailand where it grows in the evergreen forests at the margins of the clearings, up to about 900 m of altitude.

The Bauhinia sirindhorniae K.Larsen & S.Larsen (1997) is a vigorous evergreen woody climber with greyish bark stems, up to 20 m long, that anchor to the supports by means of tendrils; the young branches are green and are covered by a red-brown tomentum.

The leaves are alternate, ovate with pointed apex more or less deeply bifid, up to 18 cm long, of dark green colour, coriaceous; the new leaves are of orange colour.

Erect inflorescences, compact, covered by a rust coloured tomentum, of about 15 cm of diameter, bearing a crowd of flowers of about 2 cm of diameter, with 5 orange yellow to orange red petals and three red fertile stamina.

It reproduces by seed, previously kept in lukewarm water for one day, in organic loam with addition of coarse sand or perlite per a 30% maintained constantly humid, but without stagnations, with germination times of 15-30 days and first blooming starting from the third year. It can be reproduced also by cutting and by air layering.

Poorly known fast growing species, cultivable in the tropical and subtropical climate regions in full sun and well drained fertile soils, utilizing robust supports or making it climb on the trees like in nature.

In the less favourable climates it can be cultivated in capacious containers to be sheltered during the coldest months in a very luminous ambient with lowest temperature values not under the 15 °C. 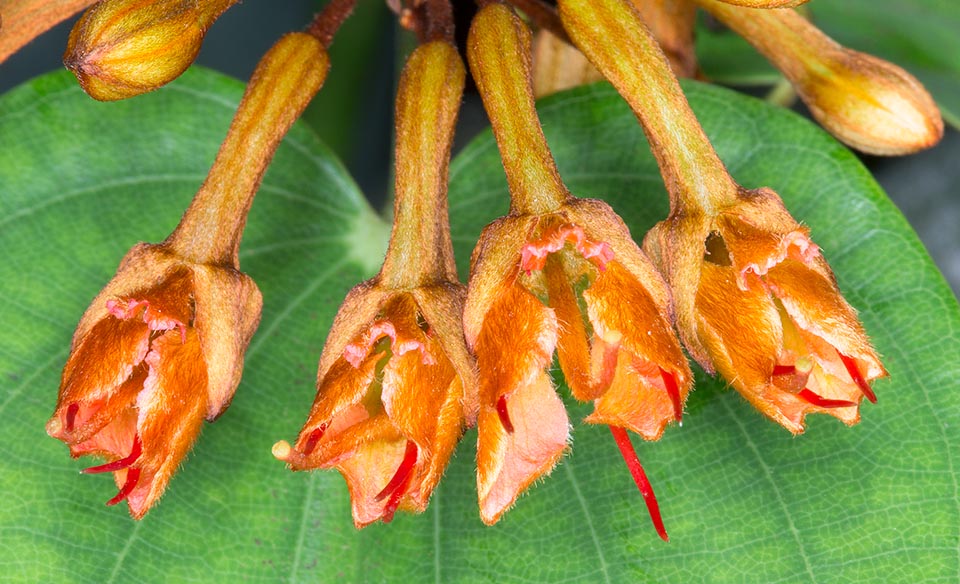 Elegant leaves, alternate, ovate with more or less bifid pointed apex, up to 18 cm long, and inflorescences with 2 cm broad corollas. The dried roots are used for the skin diseases and branches infusion as anti-inflammatory in muscle aches. Bioactive compounds with antibacterial activity of possible interest for the official pharmacopoeia © Giuseppe Mazza

The waterings must be regular, but without stagnations, and the fertilizations, in spring-summer, to be done preferably with a balanced product with microelements.

The dried roots are utilized in the traditional medicine for the skin deseases and the infusion of the branches as anti-inflammatory in the muscle aches. Laboratory studies have evidenced in various parts of the plant the presence of bioactive compounds with antibacterial activity of possible interest for the official pharmacopoeia.