There is the North American species (Bison bison), commonly called American Bison or Buffalo (even if this second denomination is not very correct), of which exist two subspecies: the Bison bison athabascae rare and of bigger size, mainly present in Canada, and Bison bison bison, present in the USA, mainly in the state of Oklahoma, smaller, and an authocthonous Euro-Asiatic species (endemic in North Europe) Bison bonasus, commonly called European Bison, slightly taller at the withers, of which do exist three subspecies: the Bison bonasus bonasus, Bison bonasus caucasicus and Bison bonasus hungarorum. The last two, unluckily, are extinct since about fifty years.

For centuries and centuries, the vast prairies of North America were the headquarters of the Bison bison which were in part sharing these pasturages with other Artiodactyls, such as the Pronghorn (Antilocapra Americana) and the Mule deer (Odocoileus hemonius), which venture as far as the Taigas.

Especially during the nineteenth century, the American Bison were living in herds of thousands of heads in continuous movement, which were maintaining, grazing, the typical look of the USA and Canadian prairies. Unlikely the natives, who were killing only the number of beasts necessary for their sustenance, for the meat and the skins, respecting the natural balance of the species, the Europeans, English and Irish, who occupied the present USA and Canada, effected real carnages of bison, very close to madness, carrying these spectacular animals almost to the extinction. Between 1700 and 1800 there were 60-70 millions of heads, whilst nowadays they do not exceed the 50.000-60.000 individuals, concentrated in reserves.

The same doom was given to the Euro-Asiatic species, so much that today there are very few thousands of Bison bonasus, protected in the reserve of Bialoweza, at the boundary between Poland and Russia, whilst before 1920 there were hundreds of thousand of them, wild, in the Lithuanian, Caucasian, Polish and Russian prairies. And, to tell the truth, we must add that the specimens of Bialoweza come from heads born in captivity in the Zoological Gardens, which left free, have recovered the condition of wild, that is, feral, species. Only survivors of an animal extinct in the wild due to the merciless hunting.

It is to be emphasized that, mainly in America, such slaughters had not the only purpose to provide meat and skins. They had to free the prairies from these huge herds, for getting agricultural-bound lands, or for building up cities and railways, not to talk of the play and hunting side, the stupid habit to kill just for the pleasure. 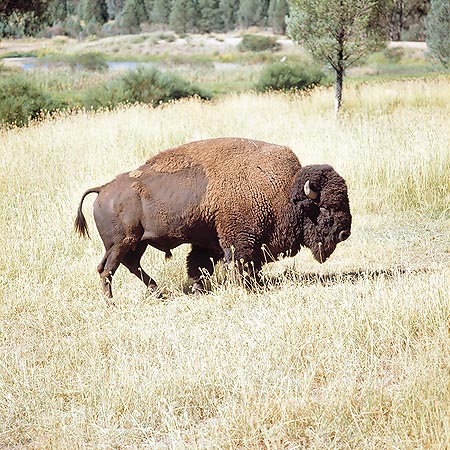 Bisons are the giants of the American prairies © Giuseppe Mazza

With regard to this, it is sadly famous the name of Buffalo Bill, whose name was really William Frederick Cody, who was proud for having killed, by himself, about 5.000 specimens. During this period of urbanization are not rare photos of farmers close to enormous heaps of bones of bison. Similar fate has concerned also various and very ancient Indian tribes of North America (Sioux, Apache, Cherokee), Canadian (Mohicans, Chinook up to the Eskimo Inuit) and many others more, in terms of slaughtering and placing in special reserves, with great limitation of the rights. The ecologic role of the American Bison was that, as before briefly treated, to keep the presence of the prairies, both with the pasture and the habit to rub themselves against the trees, stopping their growth and the development. The absence of trees reduces, obviously, the number of arboreal living birds, favouring, on the contrary, the species belonging to the order of the lagomorphs, animals with terrestrial lair, such as the Snowshoe Hare (Lepus americanus) which has still now a big population in this area.

They are the giants of the American prairies, once present from Mississippi to the Rocky Mountains from East to West till the Canadian plains. Now they are reduced to few thousands confined in protected reserves and natural parks, like the forest reserve Shoshone in Wyoming, the National Park of Yellowstone which spreads from Wyoming, Montana and Idaho.

Their best ecosystem is characterized by the prairies where they nourish, grazing, of several kinds of grasses, at times going in the bush, where the Artemisia tridentata, an asteracea typical of western USA, called Sagebrush, of which they are particularly greedy. Like all ruminant phytophagous herbivores, seen the low nourishing contents of the nutriment and the particular digestive physiology, the dedicate most of their time to graze (please see at this purpose the item Artiodactyla).

Recent genetic studies, done both on the Bison bison and on the European species, the Bison bonasus, would evidence that the two present species, are in reality heteroform of one only species; and some authors go even farther, asserting that the genus Bison should be a subgenus of the genus Bos.  But we are still in full debate, because others, looking at the zoo-anatomic parameters, object that with 14 pairs of ribs, the genus Bison is well different from the genus Bos, having only 12 of them. Furthermore, apart the lumbar line, the spine of the bison is not, like in the genus Bos, straight-lined and parallel to the ground, as it is bent down in the thoracic line. The spinous processes are enormously developed and the total anatomic picture gives these animals a typically humpbacked state, with the front part bigger and which seems raised as regards as the rear part. Also the vocalizations of the bison (in both species) are different from the domestic bovines. They look more like a deep grunt, which recalls that of the domestic pig (Sus domesticus) or the wild boar’s (Sus scrofa).

The adult males of the Bison bison can weigh about one ton and reach at the withers the 180-190 cm of height; the females, shorter, have values around the 150-160 cm, with a weight of about 500 kg. Apart the dimensions, there is not an evident sexual dimorphism between male and female, both have a pair of hollow horns, permanent, curved upwards, of 21-35 cm of length.

The bisons live an average of 20-25 years, and the showy hump at the height of the shoulders is covered by a thick fur of haggy hair descending along the head, the neck and thorax till the fore limbs. The hair of the rear quarters is, on the contrary, short and soft, woolly, subject for both male and female, to a spring moulting. This cover is useful for protecting both the North American and the European species from the rigid boreal winters, with temperatures reaching the -50 °C and strong chilly winds at 160 km/h. The colouration of the fur varies from the burnt dark brown to the black. The tail, hairy, is about 30 cm long. 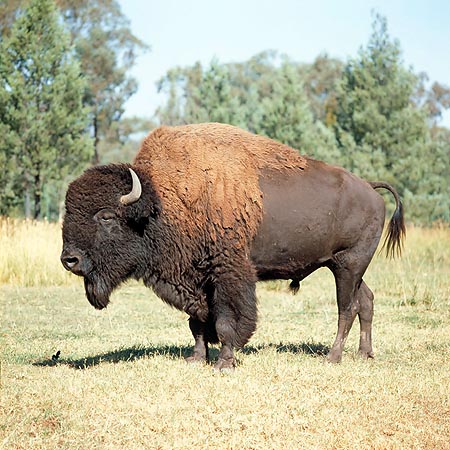 Adult males can weigh more than one ton © Giuseppe Mazza

Like all artiodactyls, the Bison bison are unguligrade and paraxonic.That is, the weight of the body axis lays on an even number of not regressed toes, which generally are the third and fourth finger covered by an ungula. They are animals with heterodont dentition (teeth with different morphology and function) with marked regression of the incisors and the canines, disappeared in the lower mandibular arch, and great premolars and molars with specific functions, as typical of the herbivores.

As told before, these animals have a rather gregarious life, moving in flocks for several km (this especially in the past, when they were free to go everywhere), or marching, trotting or galloping, reaching even a speed of 45 km/h. The flocks in movement often proceed slowly looking for fresh grass to graze.

During the period preceding their extermination, when the winter season was coming, they used to migrate from the North to the South, and later they returned to the North during the following spring, when the ices were melting leaving room to the new and fresh grasses.

There is a sort of hierarchy, evidenced by the fights between the sexually mature males. Fights head against head, horns against horns, which decide with powerful knocks who will be the leaders of the groups or of the herd, and will be favoured by the females during the heat period.

The struggle ritual follows a precise scheme. The two rivals move slowly one towards the other, shaking the head and emitting threatening grunts. At this moment, the weaker withdraws immediately; but when it’s a young decided to contend the hierarchy of the herd, the fight is unavoidable and the animals can get injured even seriously. The loser re-enters the herd, assuming, like the others, a subordinate rank, or retires to a solitary life. The subordinate males avoid the dominants, who evidence often their supremacy, shaking the head, or casting glances or grunts of warning to the males giving sign of intolerance. The dominant males, who lead inside the herd each one a group with more leaders, are the first to eat, when a zone rich of grass is found, the first to drink in the ponds, and the first to roll in the muddy puddles, for playing or for eliminating, in summer, the hematophagous insects (fleas, ticks, crab-lice, lice) which nest in their mantle.

Also in this case, as it happens in Africa and Asia with rhinoceroses, water buffalos, hippopotamuses, giraffes, or zebras, a cooperation has settled with insectivore birds nourishing of such parasites. They are not the Red-billed Oxpeckers (Buphagus erythrorhynchus), or Cattle Egrets (Bubulcus ibis), but the Brown-headed Cowbird (Molothrus ater), a small passerine belonging to the family of the Icteridae, which lives perched on the back of the bison, or flutters around intent upon its function. The procreating males spend the winter in groups of bachelors. They come back in the herd in July and August, for the mating season, and there are, obviously, frequent fights for the females in oestrum.

The female of the Bison has a bicornuate biconcamerate uterus. The placentation is of Syndesmochorial or Cotyledonary type. The pregnancy lasts about 9 months. Only one young comes to life, and sometimes the female, when the delivery approaches, gets away from the herd for giving birth to the calf. She will join again the herd only when the young is strong enough to stand well on its feet and to follow the mother in the displacements of the herd.

Suckling lasts one year and then there is the weaning, but the young remains with the mother till the fourth year of life. The natural foes of Bison bison are the herds of wolves and the bears; even if a dominant male can render difficult the life, due to its great capacities of fight, courage and size, even to a specimen of a Grizzly (Ursus arctos horribilis). In any case, these natural enemies tend to hunt preferably a sick male or old, or the offspring which they are able to isolate from the herd. For this reason, the dominant males tend to stay outside from the herd in order to create a belt of protection in favour of their weaker subjects.

The Bison bison unluckily still suffers from the consequences of hunting, not to talk about pollution and deforestation, so much that CITES and IUCN have inserted it in the red list as a Threatened Endangered Species.