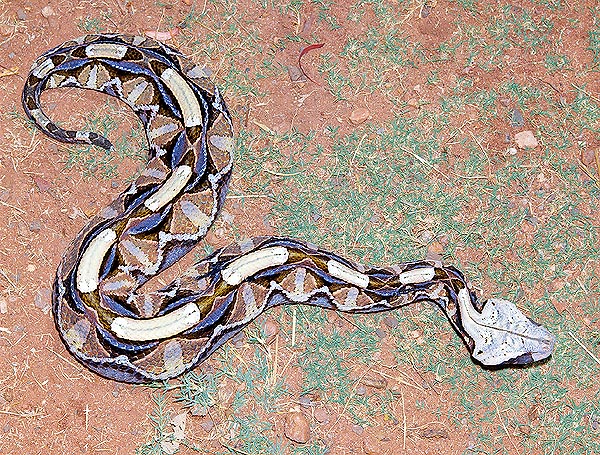 The difference between these are not showy, but the presence in the Bitis gabonica rhinoceros of a sort of “horns” at the apex of the muzzle, is much characteristic.

The other key difference is the geographical distribution: the East African gaboon viper (Bitis gabonica gabonica) has a much ampler range of distribution, which includes the forest zones of the coastal strip of the Gulf of Guinea, all the basin of the Congo River, the Republic of Congo and the Congo-Brazzaville, besides Gabon, obviously, going east along the southern part of the Central African Republic up to the south of Sudan, and further south I the zone of the great lakes and up to Zambia. There are also some isolated enclaves, one in Tanzania (southern part), two in Mozambique (Chimanimani Mountains and coastal southern zone), a small zone in Zimbabwe (Chimanimani Mountains) and finally, South Africa, where it is present only in the forest and plantations zones of Zululand. The West Africa gaboon viper (Bitis gabonica rhinoceros) is limited, on the contrary, to few zones of western Africa (Guinea, Ghana and Togo).

In both cases it’s a bulky viper, with great triangular head, distinguished from the body, reaching incredible dimensions. At the apex of the muzzle are located two modest rounded reliefs which in the subspecies rhinoceros are bigger and more evident, the nares are open upward and outward; the eye has vertical pupil.

The body, which in the specimens of equatorial Africa may reach the two metres and weigh 8 or 10 kg with empty stomach (the females are bigger than the males), reaches remarkable circumferences, up to 40 and more cm (a 170 cm individual weighed, empty stomach, more than 8 kg, with 37 cm of circumference) and gives the whole a heavy and squat appearance. The specimens of other zones, for instance of Zululand, are smaller (as an average, 120-130 cm), but, however, small is not an exact word, as it is always matter of imposing viperids. The scales, by mid length of the body, are placed in 28-40 lines and are keeled. The only serpent with which the Gaboon viper might be mistaken is the Rhinoceros viper (Bitis nasicornis), which is, however, smaller and with different colouration. 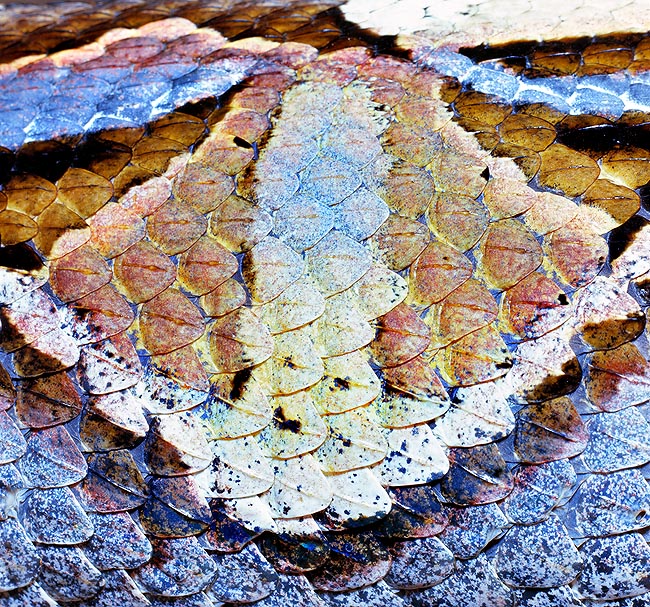 This stands among the most beautiful in the animal kingdom and renders them resembling to a Persian carpet: a series of geometric drawings detach from the background which may have a variety of hues from the cream to the maroon to the beige to the brown and up to the red brick.

Along the back there is a series of rectangular drawings, usually pale, connected among them by dark, hourglass shaped, drawings, whilst on the sides there are triangular drawings with upper apex.

The head is beige on the upper part; with a dark line which, like a parting, crosses it longitudinally, whilst, on the sides, stands out a dark triangular dot, whose apex often coincides with the eye, of orange colour or metallic grey, with vertical pupil.

The choice habitat is the forest or the zones with thick vegetation, and also the plantations; the livery, even if elegant and apparently multicoloured, camouflages perfectly the reptilian between the dead leaves of the under wood.

It is a serpent seemingly dormant and lazy, but in reality, its hunting technique is just based on the immobility and on the camouflaging which permit the unaware prey to pass by it. When biting, the movement of the head is extremely rapid, the mouth opens wide almost at 180 degrees, the venom fangs, the longest in the kingdom of serpents, long, in the biggest specimens up to 55 mm, protrude ahead almost horizontally and stick to the bottom in the body of the prey, inoculating the venom.

Then, usually, the viper releases the prey, which covers little way before dying. Utilizing the bifid tong and Jacobson’s organs, the serpent tracks the prey, finds it and begins to eat it by the head. The venom, cytotoxic, is not useful only for killing the prey, but it practically begins to digest it even before the prey is swallowed, as the powerful enzymes begin to disgregate its tissues very fast and this facilitate the digestion, once swallowed, by the powerful gastric juices. The biggest individuals may hunt and eat big animals, like monkeys, mongooses, genets and even small antelopes, like the royal antelope.

The reproduction is ovoviviparous and in some cases even 60 newborns may be delivered; the measure, upon the birth, 25-30 cm and weigh from 25 to 45 grams each. The female delivers at intervals of two or three years, but, clearly, the scarce frequency is compensated by the number, even if the infant mortality rate is high.

The normal locomotion of this serpent, like that of some other squat and heavy viperids (i.e. the puff adder) and the python is called caterpillar-like.

The serpent moves ahead slowly and in a straight line, with contractions of the ventral muscles, leaving a straight track. However, if frightened or hurried, it will proceed with the classical winding movements, thus leaving a wavy track.

The behaviour towards the man is surprisingly placid and it rarely bites, unless a foot is placed over it or if it is seriously annoyed.

The bites are therefore rare, but a possible bite of this viperid is a dramatic emergency.

The venom may be injected in dosages up to 600 mg, but it has been reported even a quantity of 2,5 grams released from a single “milking”, and deeply (fangs up to 55 mm), for this it is possible to get an inoculation reaching a blood vessel, contingency which may lead to the demise in very short time.

The lethal dosage for a man is of about 100 mg, like for the puff adder, it is therefore a rather little strong venom, if compared to other serpents (the lethal dose of the black mamba venom is of about 12-14 mg), but the quantity is more than enough for killing.

Usually, the viperids’ venoms take longer for killing an adult man than those of some elapids, and usually it is rare that the death takes place in few hours, however, the high dosages, a possible inoculation in a blood vessel, a sudden shock, an anaphylactic reaction, may cause the demise even in a few minutes.

Such venom is cytoxic, therefore the bite is painful, with a massive oedema which may lead to an early hypovolaemic shock (due to sudden decrease of the pressure caused by the loss of liquids from the bloodstream), followed by necrosis and gangrene which, even in case of survival, may lead to the amputation of a limb.

There is also present a heamotoxic action with consequent haemorrhages, and, on the contrary, formation of clots and of disseminated thrombi. Other cause of sudden death and after short time is, in fact, the cerebral haemorrhage, complication which is less rare than what is believed after the bite of many species of serpent, in particular of the echis, the Russel’s snake and of some pitvipers.

Bitis gabonica was last modified: May 26th, 2020 by Giuseppe Mazza