The genus Bitis is the one comprising most of the African vipers and is also that with the most ample geographic distribution, being absent only from the central part of the Sahara desert and from the grassy plateaus of high altitude of eastern Africa.

Within the Bitis, we may distinguish roughly two groups: on one hand the nig vipers (Bitis arietans, B. Gabonica, B. nasicornis, etc.), which, curiously enough, may mate with each other and generate hybrids, with the exception of the Ethiopian mountain adder, on the other hand, a larger group of small vipers, usually loving the arid and, at times, mountainous, areas.

The Kenya horned viper (Bitis worthingtoni) is a small viperid with a stocky and robust body, flattened head, wide and triangular, with small and imbricate cephalic scales, small eye, unlike the arboreal vipers, placed much ahead and with elliptic and vertical pupil. A raised scale is present over both eyes and forms a sort of a small protruding horn.

The neck is very thin, if compared to the robust body, and the head results, in this way, well distinct, whilst the tail, short and more filiform, is also well evident from the remainder of the body. The scales are strongly keeled and give the body a rough appearance, rendering also much clear and sharp the dark marks which ornate the back and the sides of the reptilian, and are placed, by mid length, in 27 to 30 oblique rows.

The maximum size may reach the 50 cm, but the average stands on the 25-30 cm, rendering this species quite similar to its austral cousin, the Bitis caudalis. 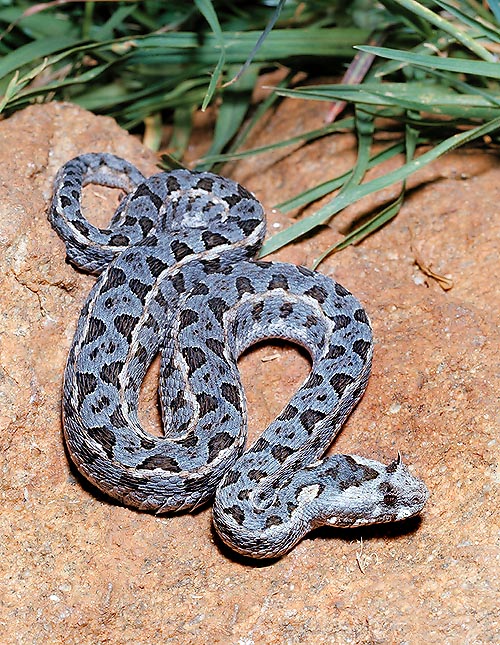 Unlike this last, however, the background colour is rather constant, usually gray ash, with a series of 30-36 black triangular marks, at times surrounded by a thin white or yellowish stria. The dark dots have, in some specimens, a more rounded shape, in others, they tend to form a continuous stria. Another series of triangular dots runs along both sides and often the upper and the lateral triangles are separated by a pale, inconstant, line.

The colour of the head is pale and, on the top, there is a dark or black mark with the shape of the point of an arrow, usually bordered by a very thin paler stria. The ventral part is white or cream, speckled with small black spots.

Terrestrial animal, usually nocturnal, at times climbs on low shrubs, especially after the rain or if the soil is wet or cold. During the day, it often shelters under a stone or a bush, however, at times, it is active also during the day, especially with o’cast weather.

A characteristic of this species is the fondness for the bushes of Leleshwa, a local name for indicating the “Camphor bush”, a plant from which they get an essential oil (Camphor bush oil). This plant (Tarchonanthus camphoratus) is a sort of wild sage, present along the Rift Valley as well as in austral Africa: from the distillation of stems and leaves they obtain a yellow or pale green oil, with a camphor smell, with antiseptic properties, effective in the treatment of the acne and of others pathologies.

The Kenya horned viper often loves to hide under the fallen leaves at the base of these plants, and this preference might have a logical explanation which, however, I do miss. On the other hand, I have noted this fact also in other species of “pygmy” vipers and with other vegetal essences strongly aromatic (maybe for association with the same, of some usual prey of the reptilian?).

The movements, when displacing, are slow and seemingly clumsy and awkward, but these serpents, endowed with a choleric and irritable temperament, are instantaneous when they decide to bite and at times they do so with such an enthusiasm to jump literally ahead for a length even greater than that of their body, other characteristic common with the austral horned viper (Bitis caudalis). On sandy or saggy soils, at times they utilize a progression of the type “side-winding”.

The geographic distribution is limited to some almost punctiform areas of the central part of Kenya, in highland zones, usually over the 1500 metres of altitude and a population is described also around the Naivasha Lake. The preferred habitat is the grassy and arid steppe, with emerging groups of rocks and scattered bushes, but also the wooded savannah and the border of thick bush may be appreciated.

The usual preys are lizards (for instance, the flat lizards and the agamas), small rodents and elephant shrews. The births take place in March-April, by the beginning of the rain season, and usually only 5 to 10 young come to life.

The venom is little studied, for the small inoculated quantity as well as it appears to be rather mild. It is known the case of an amateur herpetologist bitten on a hand by one of these viperids and who suffered only from oedema on the affected area with moderate pain and without signs of necrosis. The recovery was completed with the utilization of analgesics and dripping hydration and did not have any skin, tendons or muscles damage.