The Iberian worm lizard (Blanus cinereus Vandelli, 1797) is a scaled reptile of the family Blanidae, clade of the Amphisbaenia. The genus Blanus, in the past inserted in the family Amphisbaenidae, is one of the most primitive members of the Amphisbaenia and includes a small number of species (5-8 depending on the authors), present in the Mediterranean regions of Europe and of North Africa.

The name comes from the Greek “blanos”(βλάνος), “blind, who has a bad vision” and from Latin “cinis, cineris”, ash, due to the colour of the tegument of many specimens. 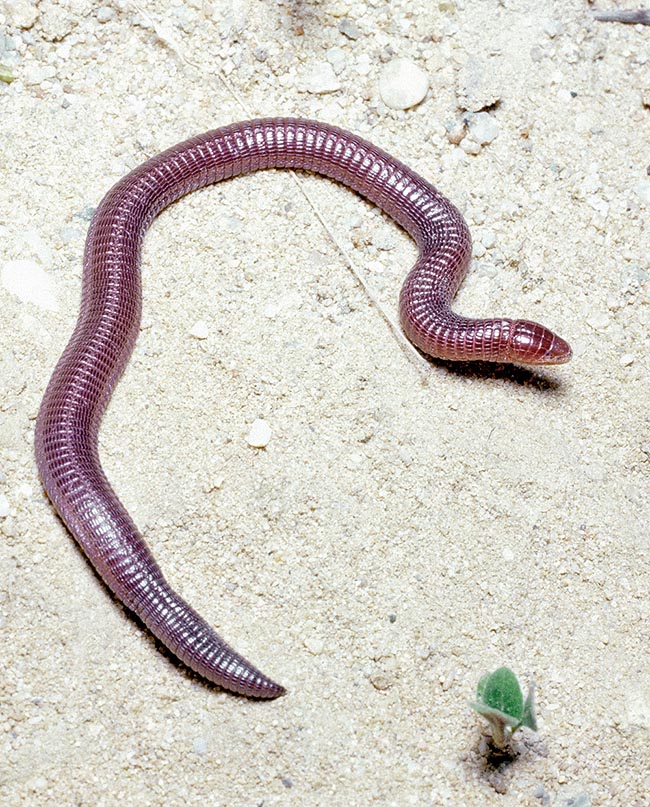 Fossorial to escape predators and maintain optimal the body temperature with the minimum energy waste, the Blanus cinereus at first sight could be mistaken with an earthworm, due to the scales arranged in rings and its accordion-like way of advancing. The head resembles the tail and can rapidly move ahead as well as backward © Giuseppe Mazza

A study done on the nuclear and mitochondrial DNA of numerous populations of Blanus, coming from different areas of the Iberian peninsula has shown the presence of two groups well distinguishable as geographic distribution and molecular characters.

Also the morphological analysis done with morphometric techniques confirms the presence of a subdivision, statistically significant, in two different groups. On these bases has been proposed, and widely, even if not unanimously, accepted by the specialists, the subdivision in two distinct species: Blanus cinereus, present especially in central Spain, and Blanus mariae, present inn the south-western regions of the peninsula. The name mariae has been given in honor of the mother of one of the scholars who have proposed the new species.

The Iberian worm lizard is a fossorial, thermophilic species, occupying ambients up to an altitude of about 1700 m. These reptiles occupy a great variety of habitats, from the forests to the gardens and to the sandy zones.

They prefer soils humid and rich of humus, with loose soil and scattered rocks, that allow to dig easily its tunnels when looking for preys and especially for reaching zones with temperatures suitable for its thermal needs.

Being this an animal a thermoregulator, this is essential to be able to maintain an optimal body temperature with the minimum energy dispenditure.

For the general characters of these reptiles, please refer to the text of Amphisbaena fuliginosa.

The body is cylindrical and reminds that of a warm like the earthworm, also due to the skin covered by scales arranged in rings, the small head and with rounded tip, roughly similar to the tail, and also to the type of accordion-like movements the animal adopts for moving in surface as well as for digging its tunnels.

The eyes are very small and covered by a translucent scale that protects them during the digging activities, which are carried on with the head, robust and armored by big and thick scales. The length of the body of the adult varies between 15 and 25 cm (of which about one tenth due to the tail, that is the portion behind the cloaca) and the color varies from pink to violet to brown-greyish. The teeth are small and sharp.

The tongue is bifid and performs an important duty in the chemosensory, linked to the predation and also of the perception of the presence of enemies, the territorial recognition and the intraspecific rapports relating the coupling. 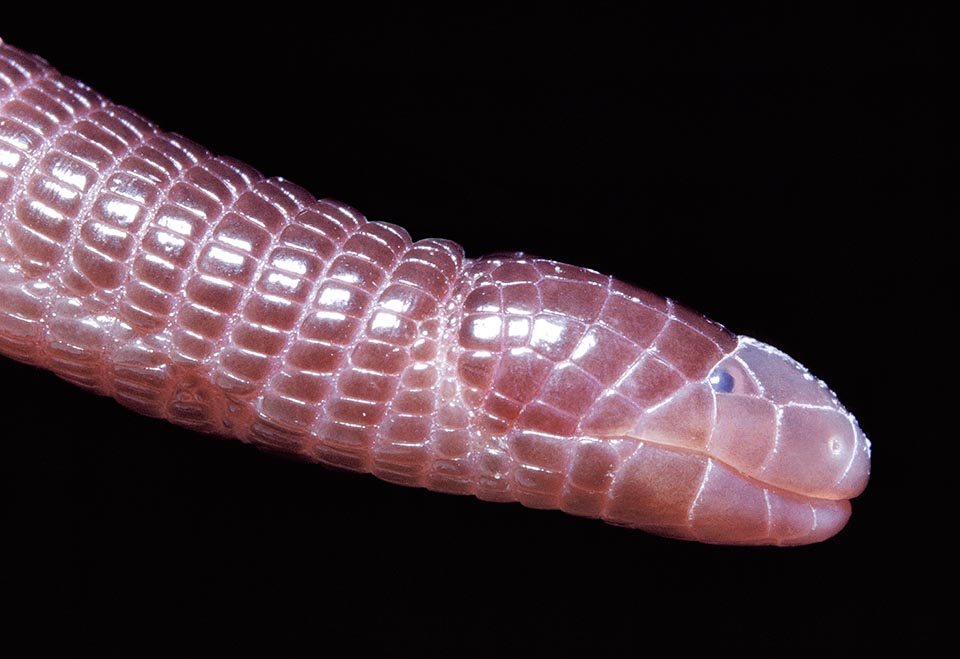 15-20 cm long, present in Spain and Portugal, it is considered as one of the most primitive members of the Amphisbaenia. The eyes are very small and covered by a translucent scale to protect them while digging in soils, loose and humid, rich of humus, with the robust head armored by big and thick scales © Giuseppe Mazza

In the males as well as in the females are visible the pores of the pre-cloacal glands that secrete substances having the function of marking the territory, in particular the walls of the tunnels, and that, being different in the two sexes, carry on the function of pheromones for the research and the attraction of the partner.

The skin is changed periodically (ecdysis) and the animal gets rid of the whole exuvia, as is the case of the snakes, and not in fragments like the lizards.

At first sight it is difficult to distinguish the head from the tail and this, together with the capacity of moving forward as well as backward, represents an advantage for the animal when it must escape a predator. In case of aggression the tail can be abandoned with a phenomenon of autotomy, but cannot be regenerated completely. Morphologically, the two sexes are not distinguishable.

Due to the mainly subterranean habits of this reptile, the eyesight is very reduced and allows to perceive only changes of intensity of the light. Conversely, besides the notable development of the chemoreception, that of the hearing represents the most important sensory apparatus. Thanks to the particular morphology of the columella, the bone that in these animals corresponds to the stapes of our middle ear, the Blanus cinereus is able to perceive with great sensitivity the smallest vibrations of the ground, and so to be advised about the presence of preys, predators or possible partners. 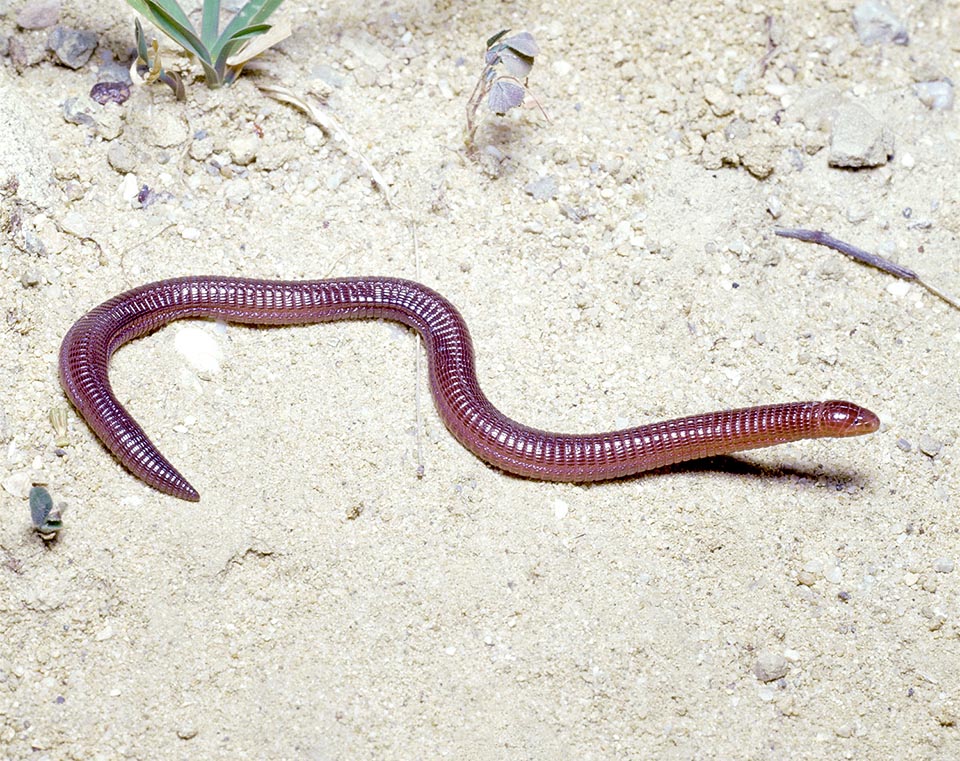 Active all the year round, but especially in spring and summer after rainy periods, the Blanus cinereus nourishes of insects, larvae of insects and exceptionally of small lizards. The female lays one only egg that is buried into the ground. After an incubation of about 70-80 days comes to life a small of the length of about 80 cm © G. Mazza

The animal is active all the year round, but especially in spring and summer, and after rainy periods.

The Iberian worm lizard is preyed by reptiles such as big lizards and snakes, by birds of prey and even by mammals like the fox or the boars. In case of aggression, one of the defensive strategies is that of rolling up tightly, forming a sort of a ball.

The diet is based especially on insects and larvae of insects and exceptionally of small lizards.

The reproductive period goes from February to June and most of the matings is observed between April and May. The female lays one single egg that is buried into the ground. After an incubation of about 70-80 days is born a small having a length of about 8 cm.