The Amphisbaenidae include more than 180 species, subdivided in 18 genera, whose members are characterized by the absence of limbs, fossorial habits (that is, they spend their life digging the soil) and carnivorous feeding. The amphisbaenids occupy all the equatorial and tropical belt. In Europe is present only one species, the Blanus cinereus, that lives in the Iberian Peninsula. However, fossil remains exist dating back to about 65 million years ago of amphisbaenids that lived in Germany, England and Belgium.

Amphisbaena fuliginosais a non-venomous reptilian, with a 30-70 cm long cylindrical body and a weight reaching the 100 g, covered by a scaly skin, with the scales arranged in rings (annules), characteristic for the black and white mosaic colouring. The arrangement of the scales in rings gives the animal a look similar to a big annelid such as the earthworm. The skin is loosely anchored to the underlying muscular layers and this allows an accordion-like motion adopted for moving in open air as well as for digging the soil. The head is covered by a thick layer of strongly keratinized epidermis that works as a protection while excavating the soil. The nasal scales are bigger and thicker than those of the remainder of the body. The eyes are highly reduced and covered by a translucent scale. The mouth, surmounted by the rounded snout used for digging the soil, is armed by robust and sharp teeth, capable of a powerful bite. The skull is rigid and compact and is utilized to make holes in the ground. 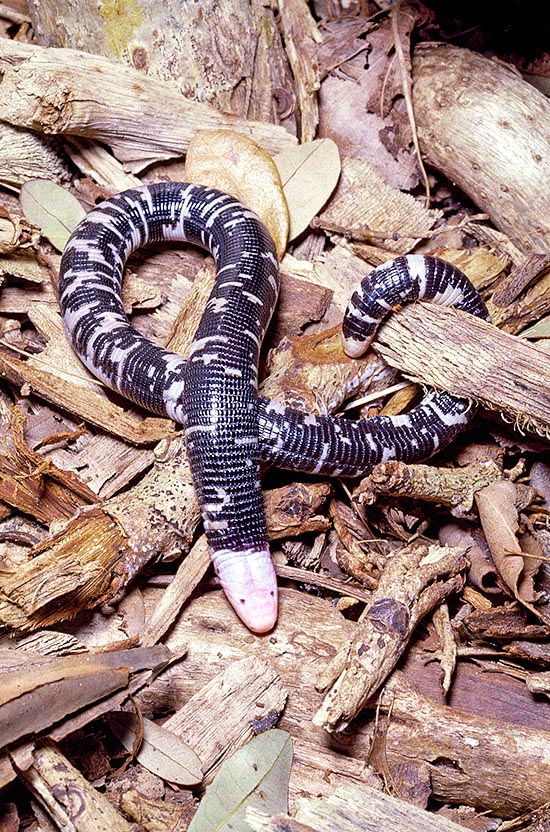 The Amphisbaena fuliginosa is a nocturnal animal, semi-blind, highly specialized for the fossorial life and spends most of its time digging the soil like an earthworm © Giuseppe Mazza

The forked tongue is used, as in the snakes, for collecting the odorous molecules from the environment and transferring them to the olfactory epithelium of the vomeronasal organ. The external ear is missing.

At the base of the tail opens the cloaca, that is the common outlet for the bowel and for the urinary and genital tracts. Before the cloaca stand the 6-10 pores of the precloacal (or preanal glands) that produce a secretion involved in the odorous signalling.

The number of the pores is one of the characters utilized to identify the various species of the amphisbaenids. The sexual dimorphism does not exist.

Amphisbaena fuliginosa lives in the rainy forests of South America and of the Caribbean, in particular is present in Colombia, Venezuela, Ecuador, Guyana, Surinam, French Guyana, Brazil, Peru and Trinidad (not in Tobago), St. Lucia and Grenada.

Amphisbaena fuliginosa is a nocturnal animal half-blind, highly specialized for the fossorial life and spends most of its time excavating the soil, similarly to what done by the earthworms.

The amphisbaena can move forward or backward exploiting some waves of muscular contraction that propagate along the body like that of the intestinal peristalsis. Since the skin is loosely anchored to the underlying layers its specialized tegument forms a tube that the animal can move in both directions. When progressing the forward part (relatively to the movement) of the body is pushed ahead and anchors to the ground with the scales, then the contraction drags forward the rest of the body. It is therefore generated an accordion movement. The soil is holed with the head.

During the excavation activity it catches and eats the worms and the arthropods of which it mainly nourishes. More rarely it hunts in open air, by night, preying even small mammals.

This reptilian spends most of its time under ground and emerges only during the night, especially for chasing the preys. It can be seen in surface especially in occasion of heavy rains or of flooding. Its habitat is represented by the pluvial forests and of the Amazonian savannahs, even if the frequent reports in the Brazilian Cerrado show that it lives also in less humid locations and pasture-lands.

It is a nocturnal animal endowed of extremely reduced visual skills and that relies, to find the preys as well as a partner for the reproduction, on its very developed hearing, the capacity to perceive the vibrations of sound and on the chemoreception. It has no venom and uses the powerful jaws and the sharp teeth for killing the preys. Normally gets the water it needs from the preys it catches. Often, it raids the nest of the ants and nourishes of these insects and of their larvae.

It may be seen in surface especially in occasion of heavy rains or of floodings © G. Mazza

As aforementioned, Amphisbaena fuliginosa spends most of its time underground digging, but when surfaces looking for preys becomes vulnerable to predators, represented mainly by snakes such as the coral snake Micrurus or to birds of prey. If attacked, displays a very particular defensive behavior. When in danger raises vertically the head as well as the tail and shakes the tail, moving ahead and back confusing and scaring the antagonist. This position creates the illusion that it has two heads and if the predator attacks the tail, will be bitten by the true head whilst if attacks the head will be whipped with the tail. The tail can be lost with a form of autotomy as occurs in the lizards, but contrary to the latter, the amphisbaena cannot regenerate it.

This behavior, together with the shape of the tail, very similar to the head and to the real capacity for moving back and forward, stands at the origin of the name Amphisbaena, that means rightly “that moves in both directions” (from the Greek amjis (amfis) “from both sides” and βαίνω (baino) “I go”, like the legendary and homonym snake.

Amphisbaena fuliginosa is a species usually solitary and is met in couples only during the period of the mating. Even if in some areas of its habitat it may abound, its fossorial and nocturnal habits render the meeting with man quite rare.

Due to its fossorial behavior little is known about its reproduction but it is known that it is an oviparous species that usually mates during the night.

The meeting with the partner is probably mediated by olfactory signals due to the secretion of the precloacal glands that the animal emits while crawling in its tunnels, leaving an odorous trace that as well as marking the territory can also attract the partner.

The mating occurs usually during the dry season. The males are equipped of two hemipenes that, when not erected, are lodged inside the cloaca. The females usually lay the eggs, 8 to 16, on piles of leaves inside their tunnels or often also in the nests of ants or termites.

The newborns have on the snout a tooth of the egg, that help them to break the shell at the time of the hatching and display a positive geotropism that pushes them immediately to dig deep. Already from the birth they are capable to perform the already described defensive behavior.

Amphisbaena fuliginosa is not considered as an endangered species and is not reported in the IUCN lists, even if in future might occur some problem due to the use, done by some populations of South America, of parts of the body of the amphisbaena as remedies for flu, diarrhea, cancer, AIDS and more.

This reptilian often occupies strongly disturbed areas such as farms or livestock breeding and this exposes the animals to be killed because mistaken for dangerous snakes.

In the ancient times the references to a monstrous and extremely poisonous snake with two heads are quite numerous: after Marcus Annaeus Lucan (Bellum civile), Perseus, after having cut the head of the Gorgon Medusa, flew over the Libyan desert and from the drops of blood of the monster come to life snakes …. “chelydri that leave behind a trail of smoke, the cenchros that crawls in a straight line and the heavy anfisibena, that has a head at each extremity.”

Dante in the canto 24 of the Hell reproduces the list almost literally to cite the horrible reptilians that torment the thieves in the Malebolge “….chelydri, jaculi and pareas…, and cenchros with anfisibena.”

Claudius Aelianus (On the Nature of Animals ) around the 200 A.D., referring also to previous authors such as Nicander of Colophon describes the Anfisibena as a very venomous snake, equipped with a head on each one of the extremities, after him really existing and not a mythological monster like the Chimera or the Hydra. The skin then, after the same author, should have wonderful properties if worn or if wrapped around an olive tree stick. Without listing the very numerous authors that describe this monster, we remind only Pliny the Elder who comments in this way the presence of the two heads “…as if it were not enough the venom of only one head!” 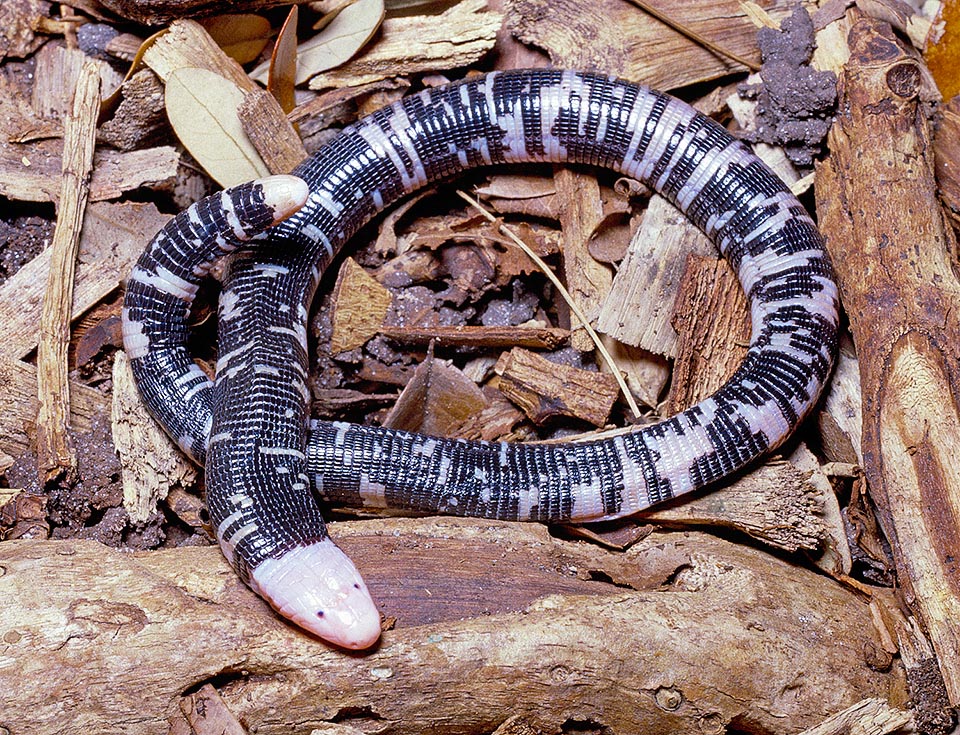 In the old times it was thought to be a snake with two heads, able to move as it liked in both the directions, and this has originated myths and incredible legends © Giuseppe Mazza

The legendary anfisibena had also other interesting properties like for instance to have the eyes bright as lamps, or the fact that, when one head slept, the other one laid awake.

Another prerogative attributed to the anfisibena was that of having the blood in possession of exceptional adhesive qualities, which allowed the animal, if cut in two or more parts, to unite the stumps without any consequence.

Perhaps, the most wonderful feature of the anfisbena was the capacity of placing a head into the mouth of the other in way to form a circle and then to roll very fast.