The  Bodianus diana (Lacepède, 1801) belongs to the class of the Actinopterygii, the ray-finned fishes, to the order of the  Perciformes,  rich of more than 150 families and to that of the Labridae, with 71 genera and 549 spedies. Fishes, from 4,5 cm to more than  2 m long, often multicoloured and capable of surprising changes of sex.

The name of the genus Bodianus  comes from the Portuguese one”bodiano, pudiano” = shame, seen that the about 30 species to which it belongs, have often the head with red shades as if being almost ashamed.

The specific term diana recalls, because of the beauty and the elegant moon-wedge shape of this fish, the mythical roman divinity of the bow-hunting, protective goddess of the woods, of the streams and of the moon. 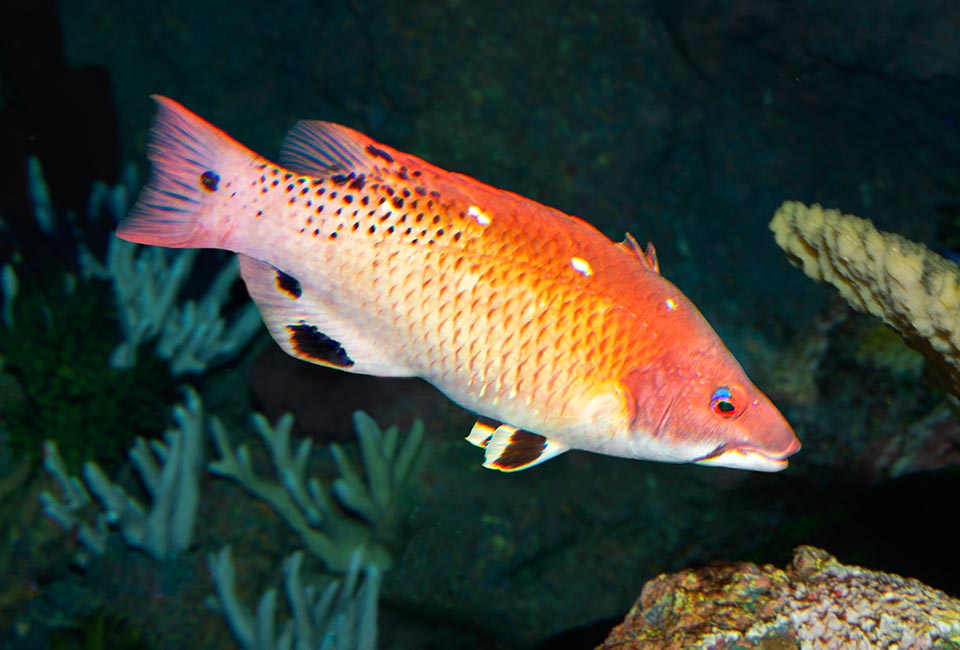 Replaced by two similar species in the Pacific, Bodianus diana is a wrasse frequent in the Indian Ocean tropical waters © Giuseppe Mazza

The Bodianus diana replaced by analogous species in the Pacific, is common in the tropical waters of the Indian Ocean. Indicatively, after the Red Sea and the Gulf of Aden, we find it in Eastern Africa and then downwards, along the coast, up to South Africa, the Seychelles Islands, Réunion, Mauritius, Maldives and Chagos, in Sri Lanka, in Thailand with the adjacent Andaman Islands, the Cocos Islands up to Christmas Island.

It lives in the madreporic formations between 6 and 50 m of depth, but more often, at 6-25 m, where the water is relatively warm, at 24-28 °C, and where the habitat is favourable to its preferred madrepore: the Heliofungia actiniformis, one of the “mushroom madrepores” having a circular flat calcareous base, with radial grooves,  that developes in the sandy bottoms and from which get out, when not resting, long tentacles resembling the sea anemones. 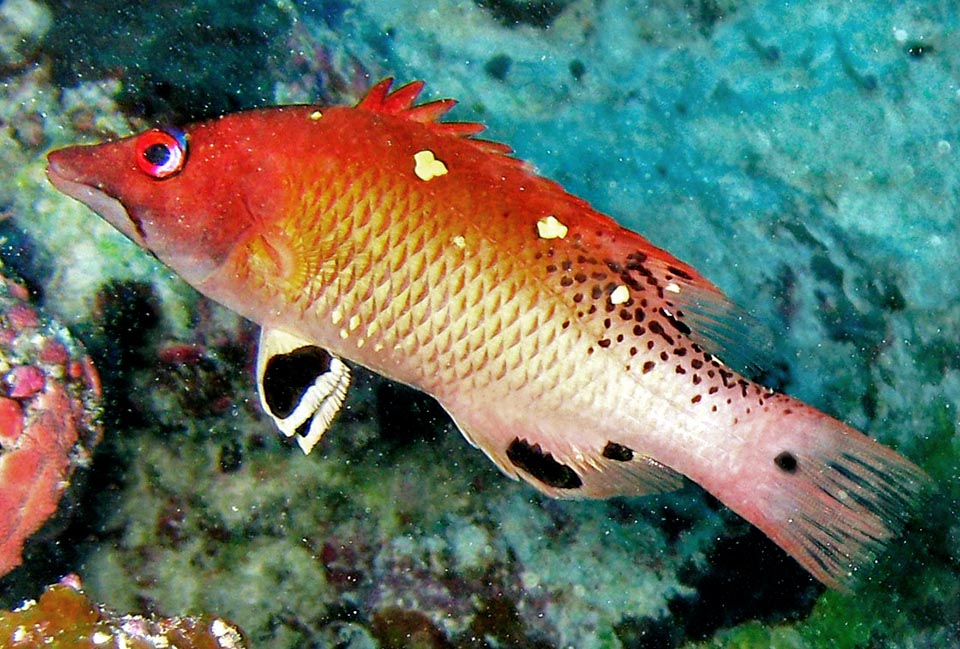 It does not exceed the length of 17 cm. It live solitary or coupled eating molluscs, sea urchins, starfishes and polyketes, not ignoring small fishes © Florent Charpin

It is a fast swimming fish that does not fear too much the currents as it is present even on the outer slopes of the reefs.

The Bodianus diana does not exceed the 17 cm. The body is elongated with pointed head and a mouth having canines bent inward, like hooks, to catch the food in the crevices.

In the adults the body and the upper part of the fish are brown-reddish with 4 yellow dots mixed to black dots towards the caudal peduncle turning faded pink, increasingly clear, with a showy black dot at the beginning of the caudal fin, partially translucent. 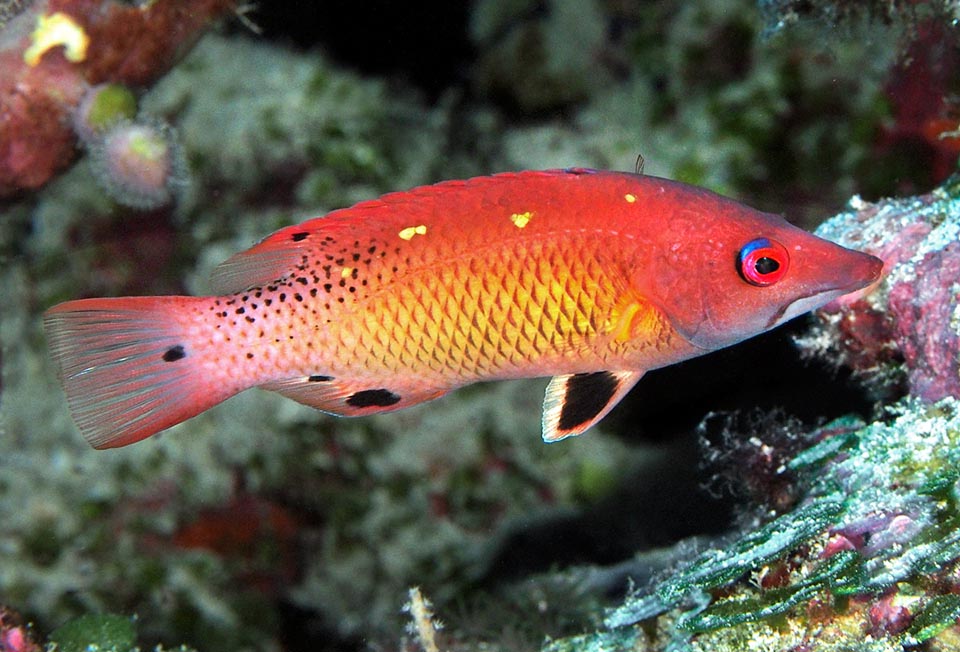 Due to its moon-wedge shape, the specific name recalls Diana, the goddess protecting the woods, streams and moon beauty © Florent Charpin

The pelvic ones are black with pale borders tending to yellow or pinkish. The central part of the body is luminous with elegant yellow scales with dark border recalling the colour of the back.

The juvenile form is totally different, brown reddish with rows of white dots at times united in longitudinal bands.

It is in this juvenile phase that we can note better the differences with the analogous  Bodianus dictynna of the Pacific, where the clear dotting is united in small traits, whilst the adults are practically identical. 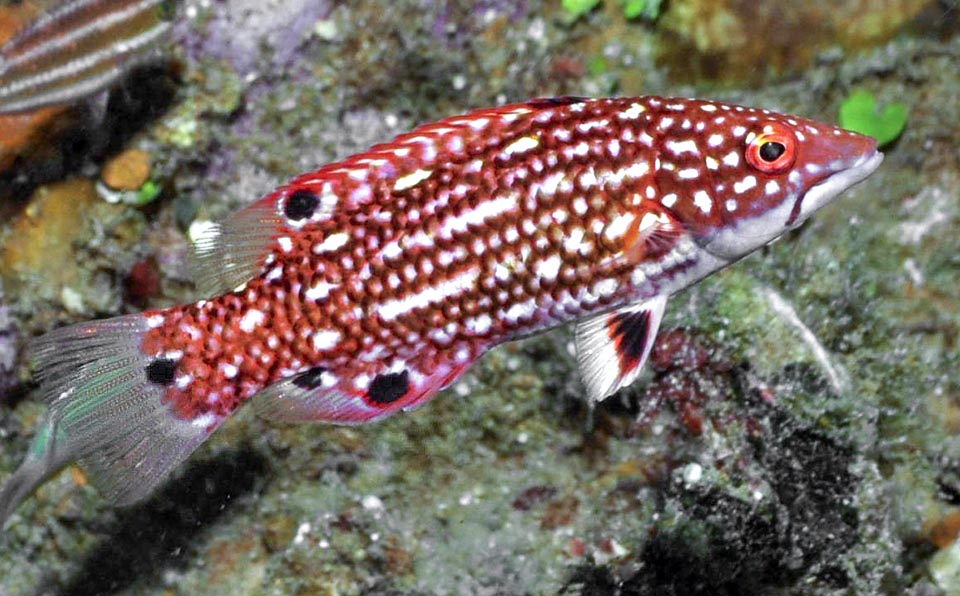 Young, the livery is wholly different and acts a “cleaning wrasse”, freeing the big fishes from the ectoparasites © Rick Stuart-Smith, Reef Life Survey

The Bodianus diana is very territorial. It lives solitary or in couple nourishing of gastropodous or bivalve molluscs, sea urchins, starfishes and polyketes, without ignoring the small fishes passing too close. When young, it acts as “cleaning wrasse”, looking for big fishes that it will free from the ectoparasites.

Parental cares do not exist, and after the fecundation the eggs are abandoned to the currents. The resilience is good, with possible doubling of the membres in 1,4-4,4 years, and even if the Bodianus diana is sometimes fished for the domestic aquaria, the collection, decidedly negligible, does not affect the vulnerability index, nowadays (2020), modest, marking 31 on a scale of 100.