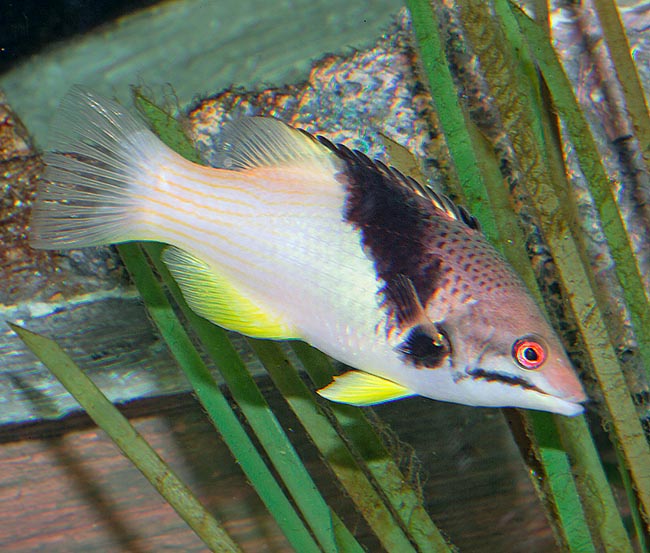 The Splitlevel hogfish (Bodianus mesothorax Bloch & Schneider, 1801), belongs to the class of Actinopterygii, the ray-finned fishes, to order of Perciformes and to the family of Labridae.

The name of the genus comes from the Portuguese “bodiano, pudiano” = modesty, seen that the fore part of the body “blushes” due to the vinous colouration.

The name of the species comes from the Greek “mesos” = half, and “thorax”, armour, thorax, with reference to the black oblique band which divides into two the adults, as well emphasizes the English name of Splitlevel hogfish.

Always in English, we have Black-belt hogfish, Coral hogfish, Eclipse hogfish, Eclipse pigfish and Yellow-spotted hogfish; in French, Labre mesothorax, Cossyphe amiral or Tabarin; in Dutch Scout by nagt (rear admiral) and in Japanese Sumitsukibera or Kesaga-kebera. What is sure is that this broken drawing confuses the predators and has a clear camouflaging value.

The Bodianus mesothorax has a very vast distribution in the tropical waters of the Indo-Pacific. Indicatively, going eastwards from the Andaman Islands and Christmas Island, we find it in Burma, Thailand, Malaysia, Indonesia, Vietnam, Philippines, Hong Kong, Taiwan, Ryukyu Islands and Ogasawara up to the southern part of Japan. South-eastwards is present in the Palau Islands, in Papua New Guinea, Australia, Solomon Islands, New Caledonia and Fiji up to the Tonga Archipelago. 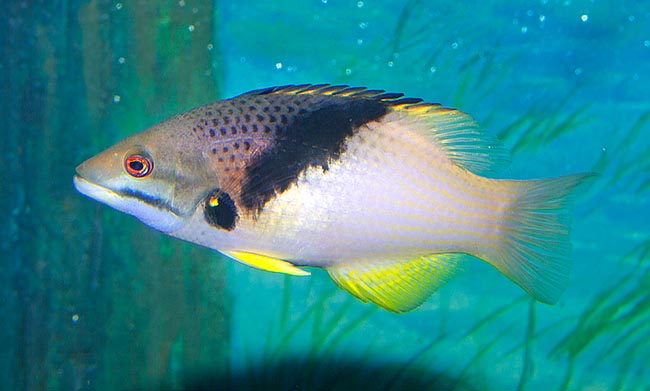 It lives in the madreporic formations usually in the first 20 m of depth, often along the steep slopes of the reefs, where at times goes down even up to 40 m.

It measures 15-20 cm but may exceptionally reach the 25 cm. The body, compressed on the sides, shows a pointed head allowing it to catch the preys among the corals with its 4 canines per jaw.

The livery, obliquely broken into two parts by a wide black band going down from half of the dorsal fin in direction of the operculum, strikes the attention due to the enormous contrast of light and colours. The front area, more or less dark, shows a pink brown head with dark spots and a showy roundish black spot at the base of the pectoral. The eye is orange red and a black stripe simulates a larger mouth by visually prolonging the jaws. It is followed on the operculum by analogous parallel bands, definitely more faded.

The rear area and the ventral part are at first sight white but we note a yellowish zone, more or less evident and spread, close to the black band of separation and the presence of thin longitudinal parallel lines of orange yellow colour well visible on the caudal peduncle. 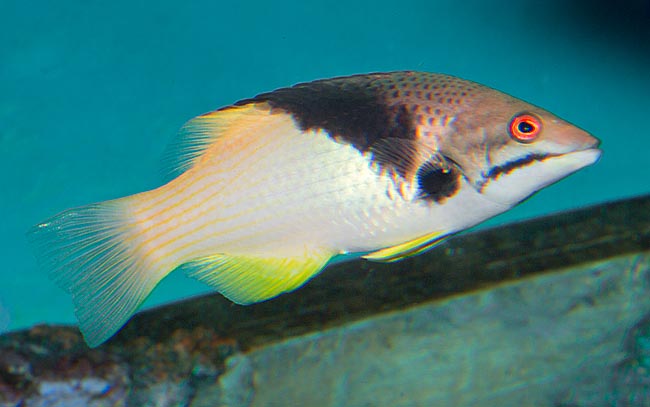 Among the corals it eats small crustaceans, molluscs and echinoderms not to talk, when young, of its activity as “cleaning Labrid” hunting ectoparasites of turtles and big fishes. It is not an endangered species © Giuseppe Mazza

The juvenile shapes have a much different look: the body is wholly dark, almost black, with several yellow ocelli, taken also by the iris, with evident camouflaging function. The period of passage from one livery and the other is of about two weeks and therefore it is most unlikely to meet intermediate liveries.

The Bodianus mesothorax nourishes mainly of invertebrates: small crusta- ceans, molluscs and echinoderms, such as urchins, brittle stars and sea stars. Especially the young clean up, like the Labroides dimidiatus various fishes from the ectoparasites.

During te reproductive period pairs take form, but the love is ephemeral and the eggs are not watched by the parents.

Even if some specimen ends up in an aquarium, where actually badly tolerates the conspecifics, it is not a species endangered by the man because it does not have any alimentary interest. Also the climate changes and the pollution have little impact on the populations, seen the broad range of preys. It has been calculated that the resilience of the species, that is the capacity of total recovery in case of catastrophes, is of only 1,4-4,4 years. The vulnerability index of the Bodianus mesothorax is consequently low: 32 on a scale of 100.