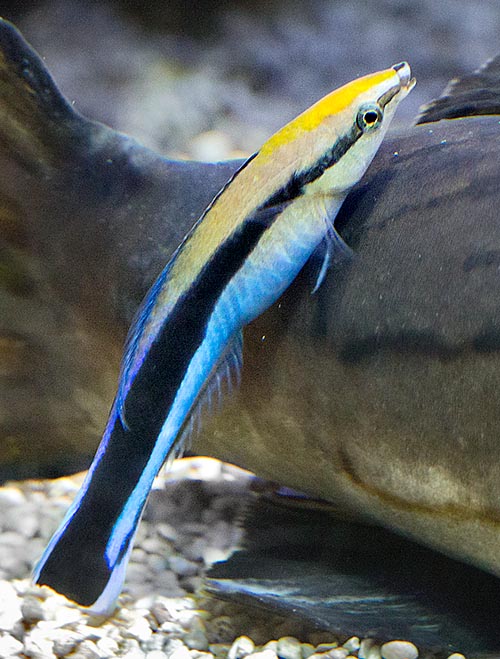 The Cleaner wrasse (Labroides dimidiatus Valenciennes, 1839), belongs to the class of Actinopterygii, the ray-finned fishes, to the order of Perciformes and to the family of Labridae, rich of about 70 genera and more than 500 species.

The name “labroides” comes from the Latin “labrum” = lip and from the suffix “-oides” = “which resembles”, “similar to”, with reference to the robust lips, beak-shaped, similar but smaller, to those of the wrasses. Others evoke the Greek name “labrax” = greedy, with reference to the European seabass (Dicentrarchus labrax). That is, it should have, because an insatiable appetite, like this predator.

The name of the species, “dimidiatus”, comes from the Latin “dimidio” = to halve, to divide into two parts, with reference to the dark longitudinal belt dividing the fish into two parts.

The cleaner wrasse has a vast distribution in the tropical waters of the Indo-Pacific.

Indicatively, we find it from South Africa and Madagascar up to the Red Sea, the islands of the Seychelles, Mauritius, Réunion and Maldives, in India, Sri Lanka, Australia, Indonesia, Micronesia, New Guinea, Palau, Philippines, Taiwan and China, up to the Ogasawara Islands in the southern part of Japan. Eastward, it has colonized Samoa, Tonga, Kiribati, the Marquesas Islands and Ducie Island. Southward, in the Pacific, New Caledonia, Lord Howe and Rapa Islands.

It swims all the day long in the coralline formations, up to 40 m of depth, where its clients live: fishes infested by parasites or by wounds to treat.

The body, tapered in the front part and then relatively flat, does not exceed the length of 14 cm.

The livery may present yellow or orange variants on the head and the fore part of the body, but the blue is always present as also the characteristic dark median line elongating towards the tail. It’s its business card, the reminder for the clients who might mistake it for a prey.

Initially, it's good to be recognized, waving the typical livery in front of the client eyes © Giuseppe Mazza

Unlike various fishes who work as “cleaners” only when young, the Labroides dimidiatus is a professional all along its life. Even if, exceptionally, it does not disdain the eggs of fishes or some small worm, in fact, it nourishes only of the ectoparasites of the clients, mainly larvae and adult isopodous crustaceans. It delicately takes off the dead tissues and especially the mucus secreted by the skin of the clients it particularly loves. It seems that relation of symbiosis with the predators has generated, evolutionally talking, rightly from this attraction it has with the mucus. Even if a little disturbed, they have, eventually, accepted them, considering that this not required taking was the lesser of two evils, the price to pay for avoiding painful parasitical infections.

In any case, before intervening on a fish it does not know, for instance a diver (there are on the web photos where it cleans the ears to a girl!), the cleaner wrasse performs a characteristic dance, exhibiting several times its typical livery in order to be sure of being well accepted. Then it does not hesitate in entering the mouth or even the gills of big predators which it treats efficiently and quickly, as, being very greedy, it has to take care of 2000 daily clients.

Also, for some species such as the morays or the puffers, it does “home visits”, the males, who have usually a small harem, look for a characteristic place, easy to remember, as a sign, among the rocks and the corals, where they open their clinic. They are so much concerned about its reputation that they send away the females who lack of professionalism unintentionally hurting the guests, not to talk of the phonies, that is, of the fishes who assume an analogous livery in order not to be predated, and which are to be driven away at all costs.

It's then possible to violate even a puffer opening and then go out merrily, full belly, chewing the last bite © Giuseppe Mazza

This is incredible. The big fishes, who know it since long time, queue and patiently wait for their time for being cleaned. Every professional studio has its own rating, because when the cleaner thinks more to the mucus than to its work, the guest realizes this and gets away upset and even tries to eat it. And if those queuing see a nervous client eventually running after the doctor, the reputation of the clinic collapses.

As is often the case in the world of the wrasses, the Labroides dimidiatus is a protogynous hermaphrodite species. For a better reproductive rate, at the moment of the puberty, in fact, the juveniles are all females, and only when the holder of the business passes away, the oldest one changes sex and takes on the aggressive role of the male. Right away, it properly curries the companions in order to get them used to the new master and oblige them to forget the desire to change sex, and signals grittily to the nearby males that the harem and the clinic are not for sale.

In the best clinics, since years in typical places, stored as a sign, the fishes often queue for treatment © Giuseppe Mazza

It is interesting to note, but this happens only in an aquarium, that if we put in small pool a big male and another one small, this one may in three months regress to the feminine status.

The eggs are pelagic and for improving their dispersion the male twists to the female on duty and goes up, so embraced, vertically, towards the surface, fecundating them while they are abandoned to the currents. The larval time lasts about three weeks and the juveniles, with their midnight blue livery, quickly integrate in the harems taking care of the smaller clients.

The populations decimated by the events may double in less than 1,4-4,4 years, and seen that, in the whole, the clients are not missing, the vulnerability of the species is nowadays relatively low: only 24 on a scale of 100.