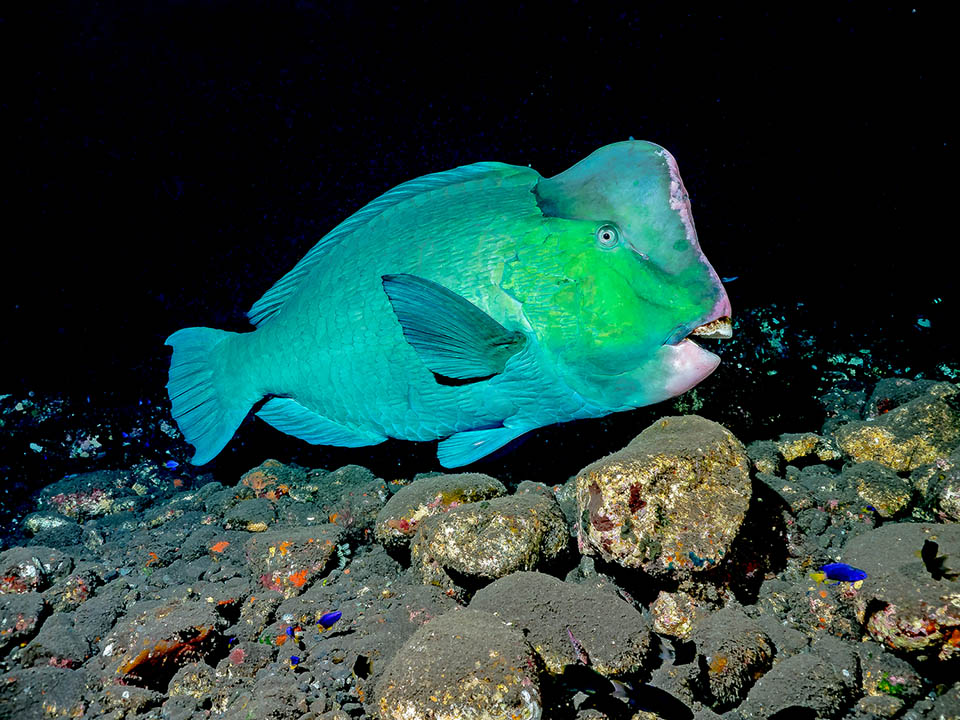 Present in most tropical Indo-Pacific, the Double-headed parrotfish (Bombometopon muricatum) is the biggest extant scarid. Even if its normal size is of around 70 cm, it can be actually reach the length of 150 cm and the 75 kg. It has an impressive protuberance on the head and a bony frontal plate resembling horns. © Lionel Houde

Bolbometopon muricatum (Valenciennes, 1840) belongs to the class of Actinopterygii, the ray-finned fishes and to the order of Perciformes.

It is the biggest member of the family of Scaridae, the so-called parrotfishes that count about ten genera and one hundred species. 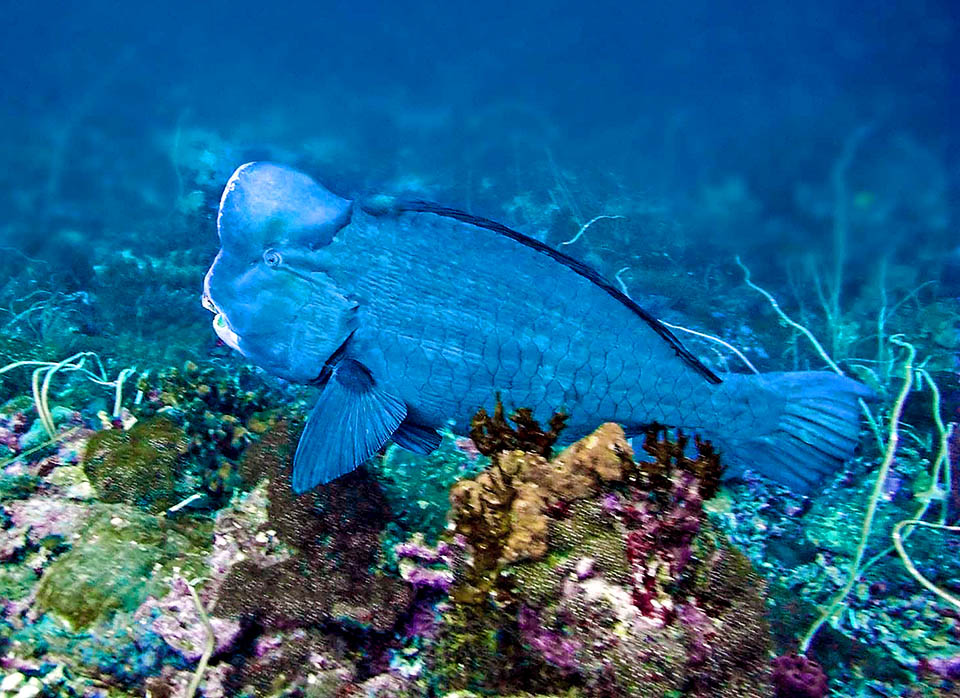 It moves in relatively shallow waters, rarely descending under 30 m. In the livery dominates th e green, but can be also blue or slate grey © Jan Messersmith

Because of the massive body, high and stocky, and the frontal corneal plate with which fights the rivals in love and destroys the madrepores then grinding the fragments for long time, like a ruminant, the vulgar name of Garrotfish seems appropriate (Poisson bison in French and Pesce pappagallo bisonte in Italian) but they talk also in various language of Green humphead parrotfish, of Double-headed parrotfish or Bumphead parrotfish. 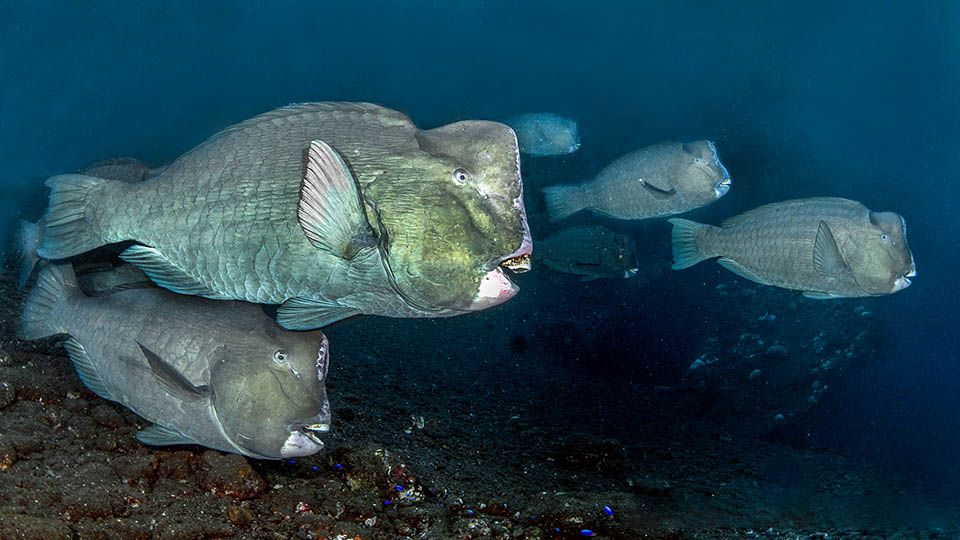 It lives grouped. In the males the bulge of the head is bigger, aligned on the snout, whilst in the females stands in a rear position and in profile forms a dimple © Karen Honeycutt

The specific epithet muricatum, in Latin spiny, refers, conversely, to the stinging graininess of the characteristic teeth of the Scaridae, merged to form the typical parrot’s bill.

Bolbometopon muricatum has a very vast distribution in the tropical waters of the Indo-Pacific. 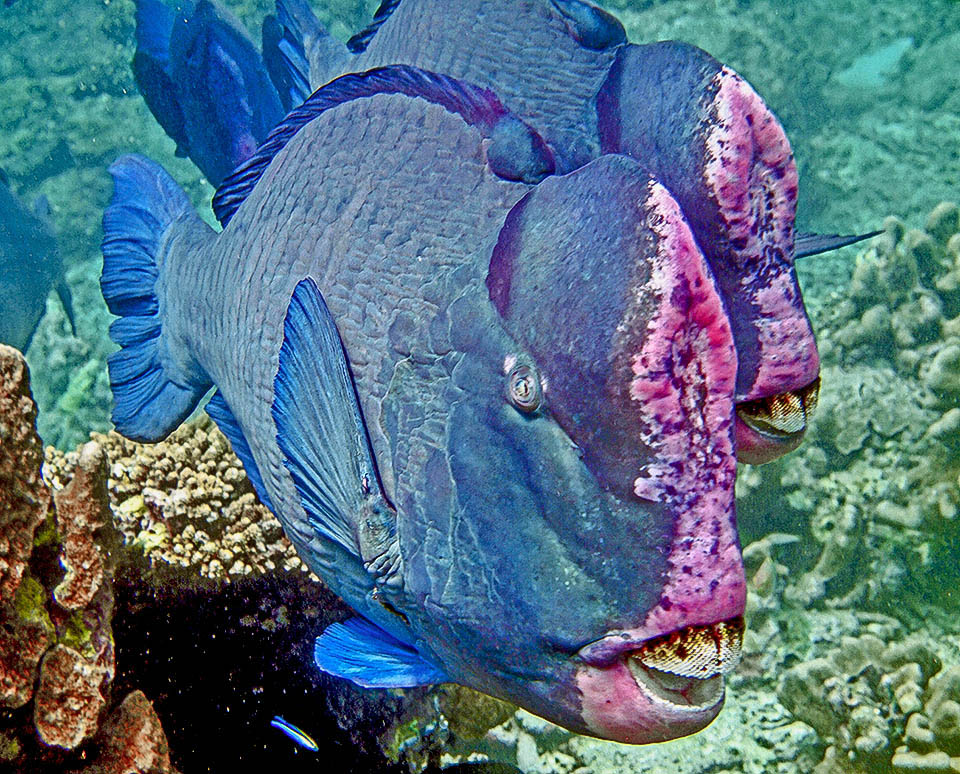 Also the solid front crest, mainly pinkish, is more developed in the males. It serves to hit the rivals with the head and to peck every day the madreporic formations branches © Bernd Hoppe

Indicatively, starting from the Red Sea, we find it along the coasts of Somalia, Kenya,Tanzania and Mozambico, in the Réunion, Mauritius, Seychelles and Maldive islands. Further east, we find it in the Andaman, Cocos and Christmas Islands. Then in the waters of Malaysia, Indonesia, Timor-Leste, Papua New Guinea and Australia up to New Caledonia. 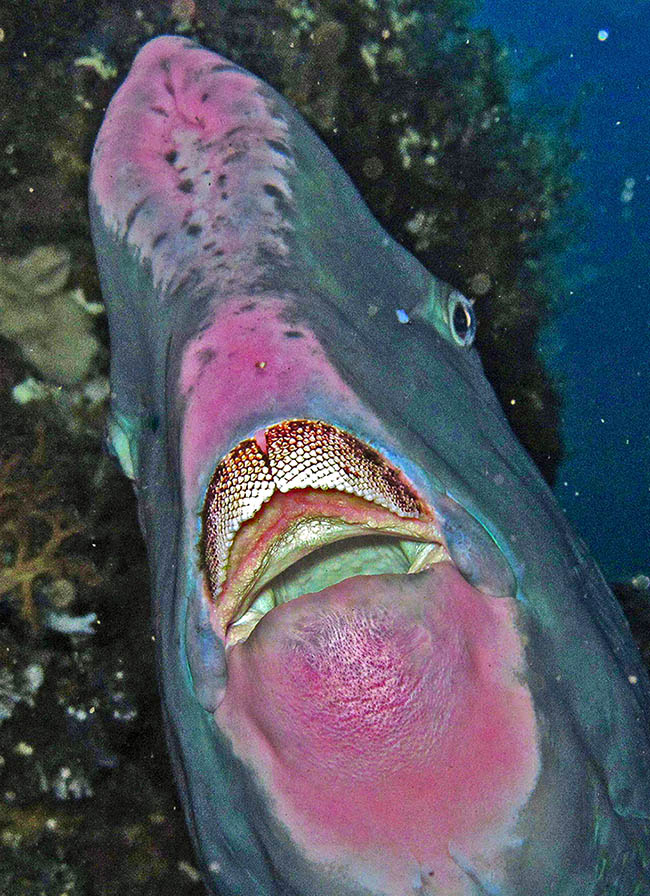 The fragments are gulped and ground for a long time by the pharyngeal teeth, like molars. An adult chews more than five tons of madrepores per year, transformed, digested, in clouds of candid coral sand. The parrotfishes beak typical in this species shows an odd mosaic of raised spiny nodules, evoked by the scientific name © Bernd Hoppe

Bolbometopon muricatum is a diurnal fish that is always found in schools: usually 8-10 individuals swimming on the outer side of the reefs, but during the reproductive period it also forms schools of 100-150 adults.

It goes swimming in shallow waters, between 1 and 30 m of depth, exceptionally reaching 40 m.

The adults graze among the madreporic formation but they do not contempt of gnawing with their powerful beak, like all parrotfishes, the encrusting algae, swallowing also the filamentous ones, the live coral polyps with their microscopic symbiont algae and any mollusks or crustaceans that have the bad luck of being over.

And if that is not enough, like the bison, they demolish with headbutts the madreporic formations for gulping down the fragments that they then keep grinding for a long time, as if they were ruminating, between the pharyngeal teeth.

It has been calculated that an adult chews more than five tons of madrepores in one year, transformed, after the digestion, in clouds of candid coral sand.

It nourishes and sleeps always in the same locations, sheltered by grottoes and at times by wrecks of sunken ships.

Conversely, the young grow in the seagrass meadows or hidden among the stinging ramifications of madrepores of the genus Acropora.

Although the normal size is about 70 cm, Bolbometopon muricatum has a massive, high and stocky, that may reach the length of 150 cm and the weight of 75 kg.

As usual in the Scaridae the maxillary teeth are fused to form two big plates like a beak that, as we have seen when talking of the specific name, display a mosaic of raised nodules. Then follow, inside, ros of solid pharyngeal teeth, similar to molars, for grinding the booties.

The characteristic protuberance of the head and the size immediately make you think of the Napoleonfish (Cheilinus undulatus), that, however, exceeds the 2 m and the 190 kg. 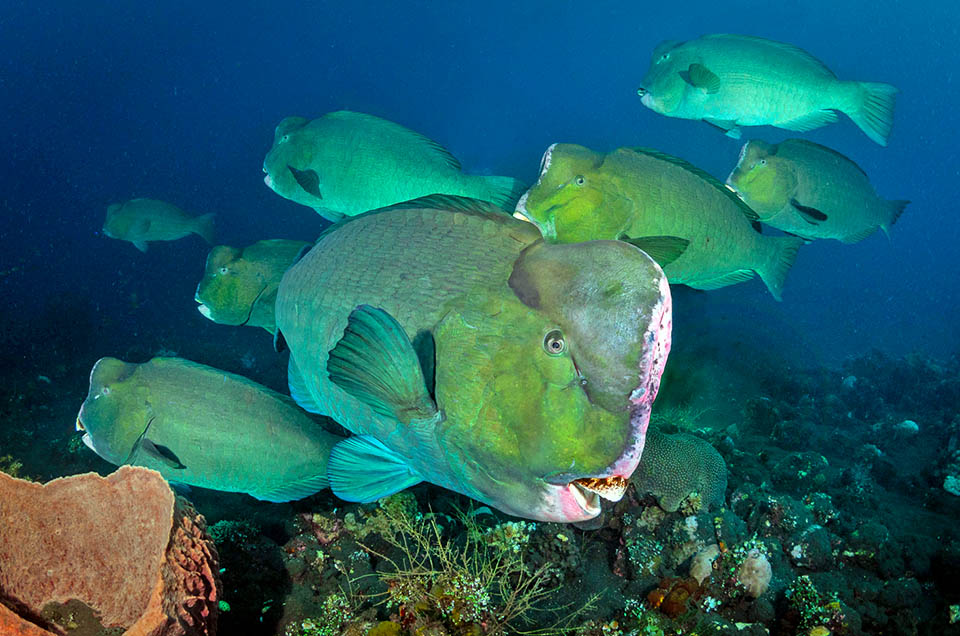 It eats encrusting algae, filamentous and symbiont in the corals polyps, with possible mollusks and crustaceans having the bad luck of being close to it © Wisnu Purwanto

This belongs to a very close family, that of the Labridae, so close that, after recent phylogenetic studies, some would also embed the parrotfishes, creating for them the subfamily Scarinae. 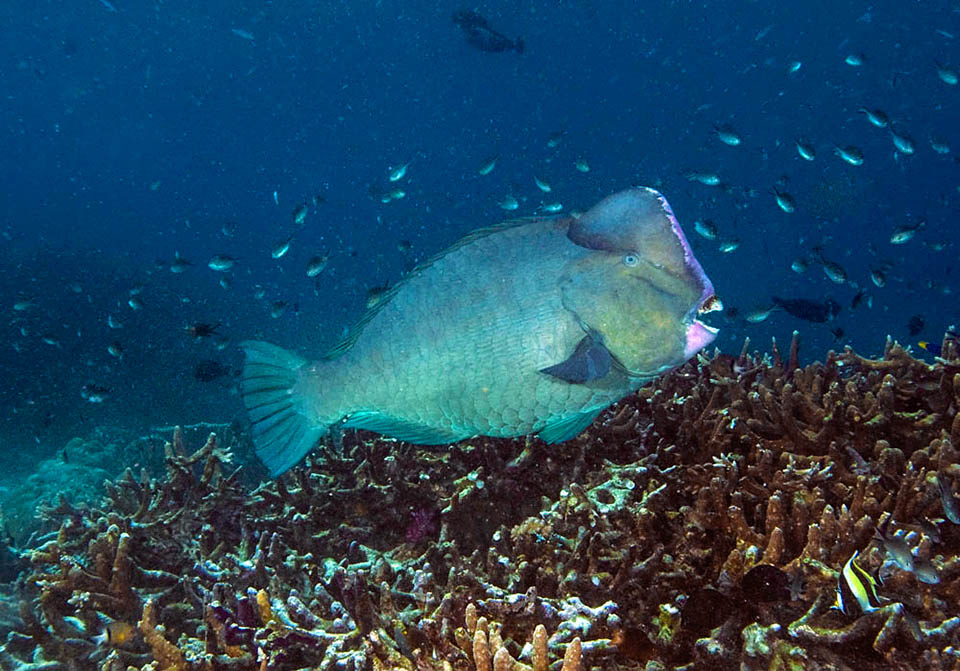 Grazing male. Too fished, Bolbometopon muricatum is since 2007 in the Red List of the vulnerable species and the climate changes degrade the reef every day © Paddy Ryan

There is no evident sexual dimorphism, but the males are usually bigger, with the ossified crest descending steeply on the snout, almost like an extension, whilst in the females the crest and the cephalic hump are smaller, and the latter begins a little further back, so much that can be noted a slight depression between the two parts. The livery of the adults shows a certain variability: it can be green, blue or of slate colour, and the crest is sometimes yellowish. 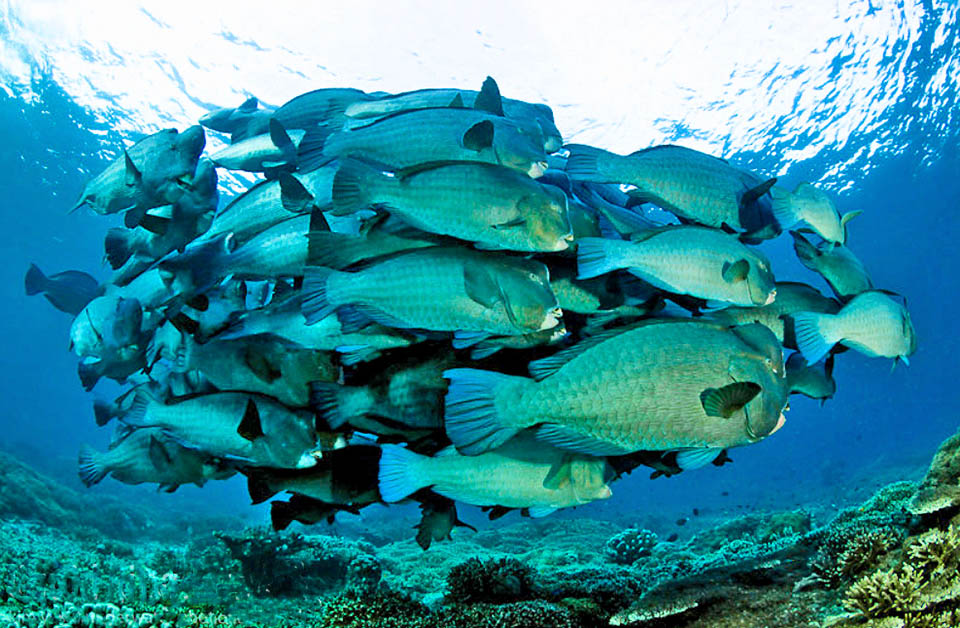 There are no group weddings, but in the reproductive time, in the sites good for the egg’s dispersion, can be found schools with about hundred individuals © Kim Yusuf

Bolbometopon muricatum is a fish with a very slow growth and long-lived that may exceed 40 years. The sexual maturity takes place around the 60 cm of length. All males during their youth pass through an immature female phase with morphologically female gonads, but later, as happens for Sparisoma cretense, the sex defines and keeps stable for the whole life.

Too easy to harpoon, the Garrotfish has become wary and usually flees upon the sight of the divers. 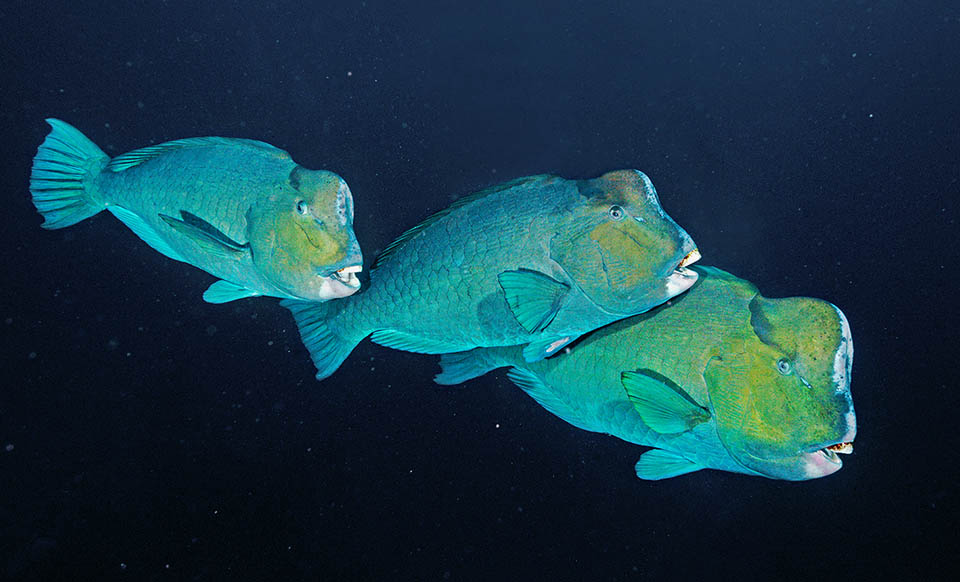 Only recently they observed the reproductive modalities, linked to the lunar cycle, with pairs emitting the gametes in the first 2 m of water from the bottom © Klaus Stiefel

So, for instance, until a few years ago nobody had realized that in the locations of deposition the males of this social and peaceful species, fight for the females, like the Bovidae, with blows of horns.

In order to avoid bloodshed, also here the competitors first give unambiguous signals to show their superiority: they go swimming nervously in parallel glaring at each other and only when none of the two gives up, then they reach the frontal direct clash, followed by a fast semicircle for biting the competitor on the side or on the back.

If this does not go away, they start again with more and more vigorous blows of horns by means of a longer run. Finally, the loser goes away, but also the winner shows some bruises. All this because, even if at dawn in the places suitable for the reproduction can be counted even one hundred of individuals, the fecundation is not collective but remains a matter of couple. 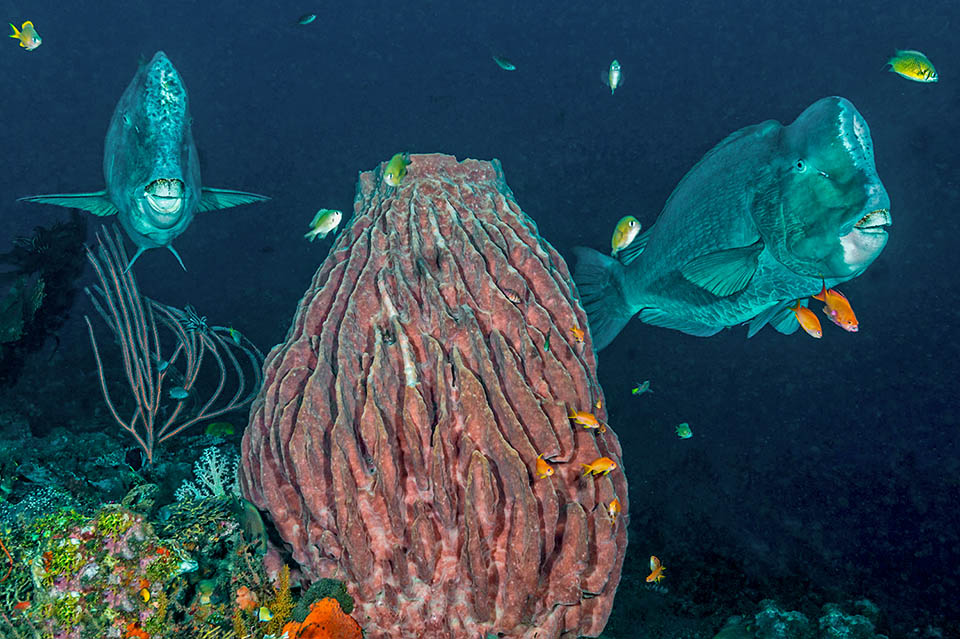 As happens in the bisons, and other bovids, compete for females chasing away with strong horns the rivals as per a precise ritual © Jim Greenfield

The release of the gametes occurs in the first two metres of water over the bottoms, in the positions where, with favorable moon, pas tong currents that disperse the eggs, each one, like the larvae, with its uncertain pelagic destiny.

At first, the young small fishes that reach the bottoms are grey with small white and balck mimetic spots, then the body darkens assuming yellow-brown shades with 5 vertical rows of white spots on the sides. The frontal protuberance is still totally absent.

From 2007 Bolbometopon muricatum appears in the “Red List” as “vulnerable species” and presently, in 2021, only in some locations its fishing is limited or forbidden during the night when these fishes are calmly sleeping, and it is easy to surprise them. 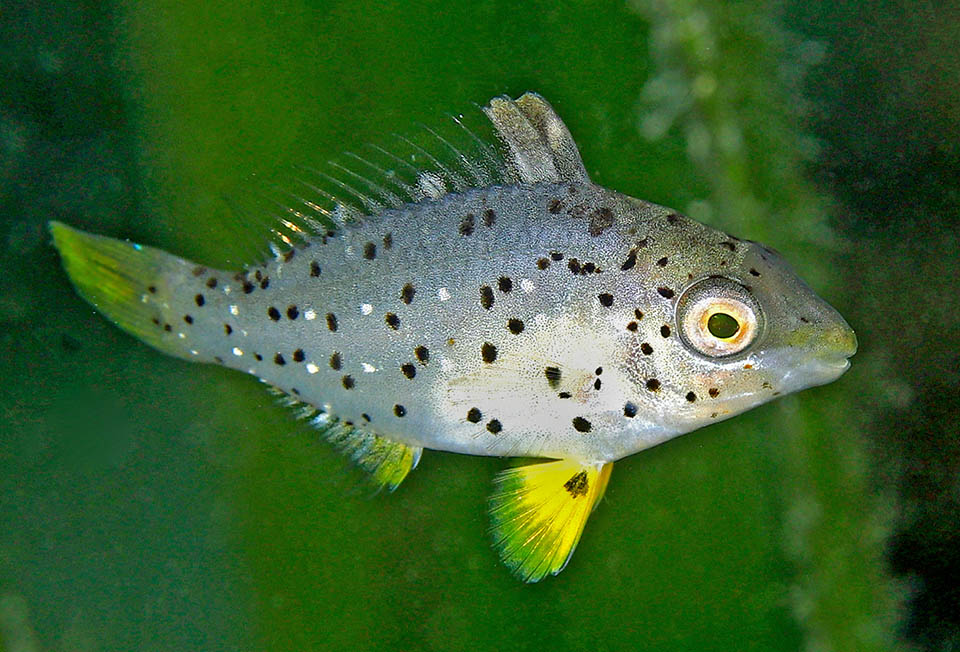 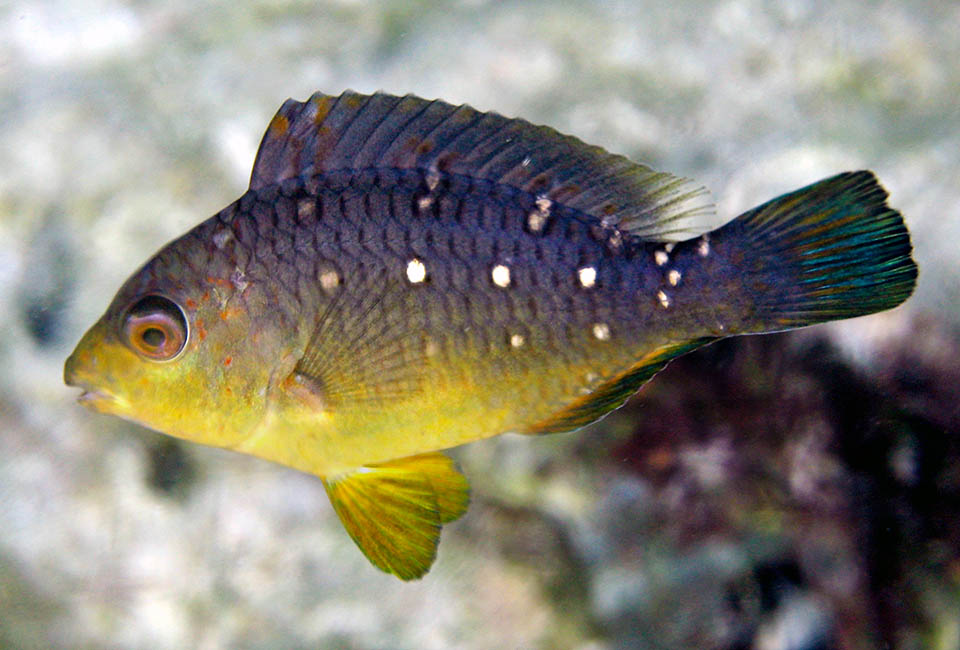 Eggs and larvae are entrusted to the currents; After metamorphosis the small fishes often hide in the submerged prairies: they are grey, white and black dotted. When, growing, they begin their life among corals, the livery darkens, getting yellow-brown shades with 5 characteristic vertical rows of white spots on the sides © Keoki Stender

As a matter of fact, the resilience of this species is very low, seeing that 4,5-14 years are needed for doubling the populations decimated by the events. No wonder then, keeping in mind also the mortality of the corals caused by the climate changes, that the vulnerability index is already very high, marking 67 on a scale of 100.