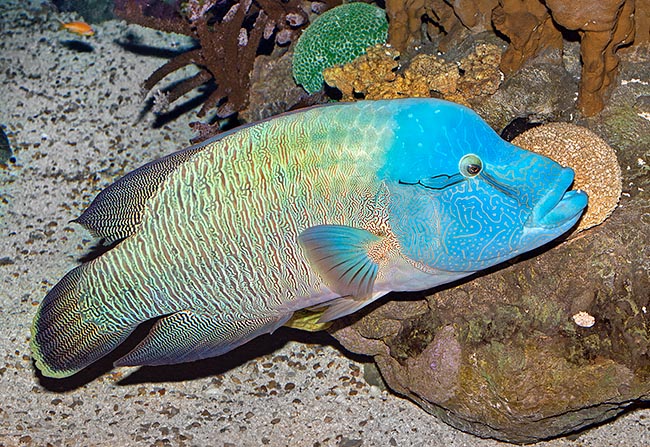 The famous Napoleon fish (Cheilinus undulatus Rüppell, 1835), belongs to the class of the Osteichthyes, the bony fish, to Actinopterygii, the ray-finned fishes, to the order of Perciformes and to the large family of Labridae, one of the most important in the world of fishes, with 70 genera and more than 500 species.

The name of the genus comes from the Greek “cheilos” = lip, with reference to its big fleshy lips.

The name of the species, “undulatus” = corrugated, draped, speckled in Latin, refers to the lively streaks of the livery.

The vulgar name, present in several languages, finally evokes the bump on the head, similar to the hat of the Emperor.

The Napoleon fish has a vast distribution in the tropical Indo-Pacific waters. Indicatively, we find it along the eastern African coast, from South Africa to the Red Sea, the Seychelles, Mauritius, Chagos, Cocos, Maldives and Andaman Islands, in Indonesia, Australia, New Guinea, Micronesia, Philippines and Taiwan up to the Ryukyu Islands in the southern part of Japan. Eastward, it has colonized the islands of Samoa, Tonga, Cook and Tuamotu. Southwards, in the Pacific, the Great Barrier Reef and New Caledonia. 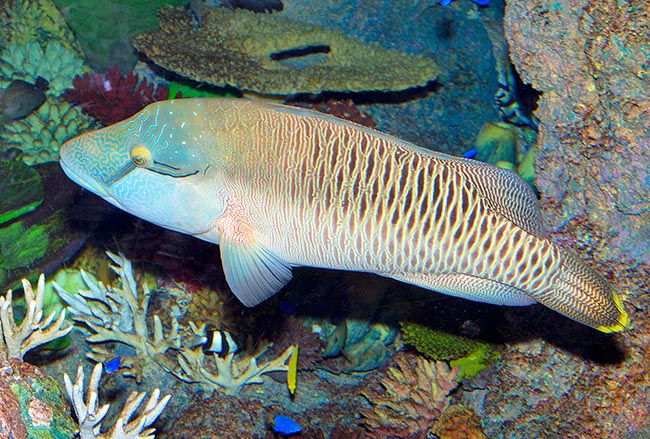 With even 2,3 m length and more than 190 kg of weight, is surely a giant in the wrasses’ world © Giuseppe Mazza

It lives solitary or in pair amongst the madreporic formations, up to 100 m of depth in benthic-pelagic waters, often on the outer side of the coral reefs, whilst the juveniles shelter under the madrepores of the genus Acropora and in the seagrass meadows in the calm waters of the lagoons. It is a rare fish, endangered, with a very low density of population: we are talking of only one adult per square kilometre of reef.

With a reported maximum length of 2,3 m and more of 190 kg of weight, is by sure a giant in the world of the wrasses, even if, unluckily, it rarely passes the 30 years reached in aquarium and is often fished when young with size less than 60 cm.

The adult males are recognized at once due to the profile, the bump on the head, but also the livery is different. Notwithstanding, like in the females, the olive speckled background colour with reddish drawings and arabesques twisted to a vertical dashing getting thicker on the fins, in fact they show bolder colours and a spectacular blue head. Typical of the species are also the two dark lines on the head, close to the eyes, starting over the operculum in direction of the tail. 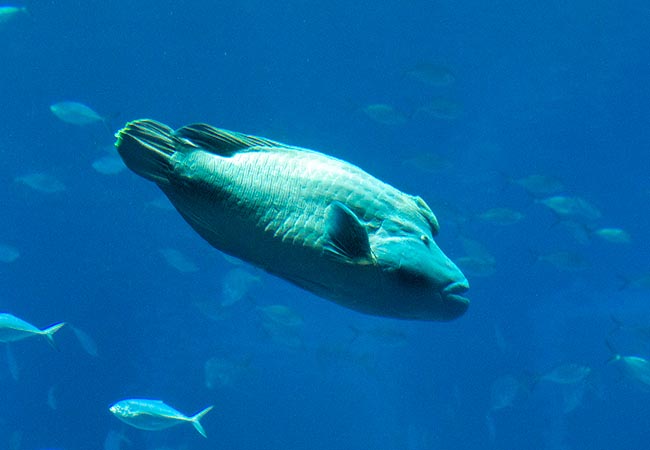 The Napoleon fish nourishes of fishes and crustaceans, but also of poisonous animals such as the tetraodontids, the sea hares, some urchins, like the Asthenosoma pileolus, or the great starfish Acanthaster planci which destroys the corals.

It is obvious, then, that he who eats it runs the risk of getting a serious alimentary intoxication called ciguatera.

Despite this, it is at serious risk of extinction, rightly for the fishing industry which attacks the young, less poisoned, often served in the restaurants as unique portion, not to talk about the aquaria market, which encourages the massacres as it is the most expensive fish in the list.

The females, which reach the sexual maturity by the 5-6 years of life, are fished before the reproduction or the transformation in male (protogynous hermaphroditic species) when they reach the 9 years with a size of about 70 cm. But it seems there are also smaller males, with feminine livery, which have never changed of sex because as such from the birth.

The reproduction happens in group, in some periods of the year, and if it doesn’t casually enter a protected reserve, it will represent one more occasion for massacres.

The eggs and the larvae are pelagic. The resiliency is very low, with populations that need 4,5-14 years for doubling. The vulnerability index of the species is consequently very high: 74 on a scale of 100, and the Cheilinus undulatus is unluckily shown as “endangered” into the Red List.

Cheilinus undulatus was last modified: May 3rd, 2022 by Giuseppe Mazza