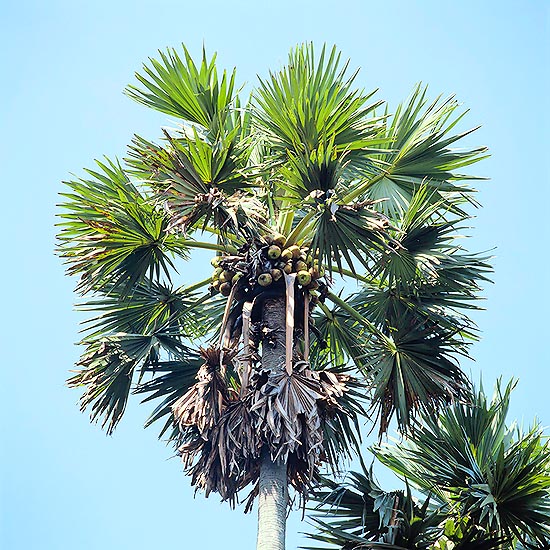 The name of the genus comes from the Greek “borassos”, word with which Pedanius Dioscorides was indicating the spathe where is enclosed the inflorescence of the Phoenix dactylifera; the Latin name of the species, “flabellifer” = carrier of fan, flabellum, refers to the shape of the leaf.

The Borassus flabellifer L. (1753) is native to tropical Asia (India, southern China, Sri Lanka, Indochina, Myanmar, Thailand, Indonesia, Malaysia, Papua New Guinea), where it grows in the thin forests and along the coasts and the water streams, mostly in sandy soils.

It presents an imposing, solitary trunk, tall up to more than 20 m, with a diameter of about 70 cm, widened at the base, of blackish colour, covered for a good part by the residues of the petioles of the old leaves and marked by the rings of the scars of the foliar bases on the oldest part. The leaves, of bluish green colour, are costapalmate, broad up to about 3 m and incised for about one half of their length in rigid segments, on a strong petiole, black at the base, long about 1,3 m and irregularly dentate on the margins.

Dioecious plant, it presents ramified inflorescences, long about 1 m between the leaves; the ovoid fruits, about 15 cm broad, usually contain 3 seeds, are of a brown colour when ripe and can weigh up to 2 kg. The seeds germinate in about 2-3 months (but the first leaf will come out later on) and are usually placed directly on the ground as the hypocotyl which develops from the seed, and on whose extremity is the bud from where will come the first leaf, reaches a depth of 50 cm.

The plant holds still a remarkable economic importance in the countries of South-East Asia, thanks to the fruits which are variously utilized in the alimentation, and, mainly, to the sugary liquid obtained from the male inflorescences; furthermore, the trunk, resistant and lasting, is utilized in the constructions and the leaves for several handicrafts. This palm has also a moderate ornamental utilization, in full sun and in wide gardens, within the tropical and subtropical warm-humid zones, as it does not even bear temperatures around the 0°C.