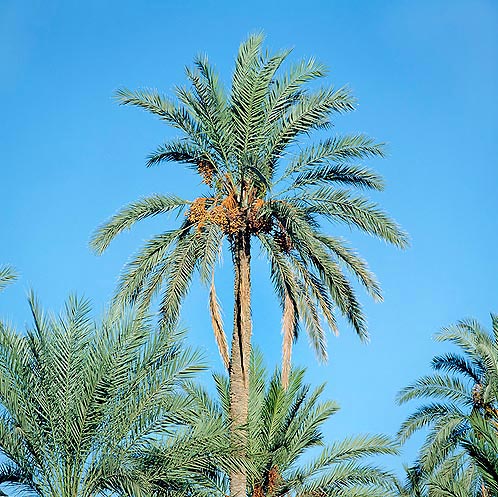 The name of the genus is the Greek one which was given the plant in the antiquity. The name of the species comes from the Greek “dactylos” = finger, and from the Latin “fero” = to carry, with reference to the fruits.

Cultivated since ancient times, we do not know its exact place of origin, the most accredited hypothesis places it in the area between Pakistan and the Arabian
peninsula, where, moreover, the oldest traces of its presence have been found.

In Egypt, they have found evidences of its cultivation already in the pre-dynastic time (more than 7.000 years ago), together with the Hyphaene thebaica and the Ficus sycomorus, and numerous are the pictorial ones, dating back to more than 3.500 years ago, which show their utilization also as ornamental plants.

Nowadays, the Phoenix dactylifera L. (1753) is vastly cultivated in the whole North Africa, and the Near and Middle East,where it has been, and still is, of vital importance for many populations.

Its fruits, which can be conserved for long time, have been, and in some measure still are, the main nourishment, whilst all the other parts of the plant are still utilized for various purposes.

For these reasons, the Date Palm has held, since the antiquity, also an important symbolic role both in the social and religious field. Single trunk, or cespitose palm, with trunks of a diameter of 30-40 cm, tall even more than 30 m, on which remain, for long time, the bases of the dried up leaves. The leaves are pinnate, about 4-5 m long, with rigid leaflets, of a greyish-green colour, and long up to about 40 cm, reduced to thorns in the basal part. 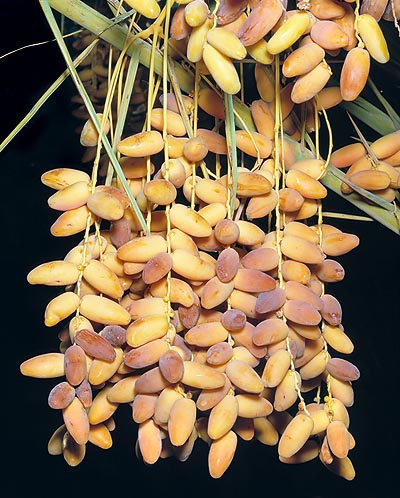 It is a dioecious plant (each individual carries only male or female flowers).

The ramified inflorescences, between the leaves, are about 1 m long. The male flowers are of cream colour, the female ones, yellow. Oblong fruits, of about 5-7 cm of length, and 2-3 cm of diameter, with colour from yellow, to orange, to dark purple, depending on the variety. It reproduces by division and by seed, which germinates in about two months.

In addition to the traditional locations, in recent times they have begun the cultivation, for the production of the fruits, in other dry hot climate areas of the world.

Whilst, as an ornamental plant, it’s widely cultivated in all tropical, subtropical and mild zones, where it resists to temperatures up to -10 °C, in full sun and well drained soils.