The Hyphaene thebaica (L.) Mart. (1838) is native to the northern and central Africa (Egypt, Tchad, Djibouti, Sudan, Erythrea, Somalia, Camerouns, Central African Republic, Benin, Burkina Faso, Ivory Coast, Gambia, Ghana, Mali, Mauritania, Niger, Nigeria, Senegal, Sierra Leone and Togo) and of the Arabian peninsula (Saudi Arabia and Yemen), where it grows in sunny and arid areas, but with availability of water in the under ground, or in proximity of the coasts and the rivers.

The name of the genus comes from the Greek “hyphaino” = to weave, to intertwine, with possible reference to the interlacement of fibres in the pulp of the fruit ; the name of the species refers to the city of Thebes, ancient capital of the Upper Egypt.

The most evident characteristic of this palm is the ramification by dichotomic division of the stems in the adult plants, characteristic which it shares with very few other plants. The stems, covered in good part by the remains of the petioles of the old leaves which cross in a typical way, can reach a height around the 15 metres with a diameter of 30-45 cm. 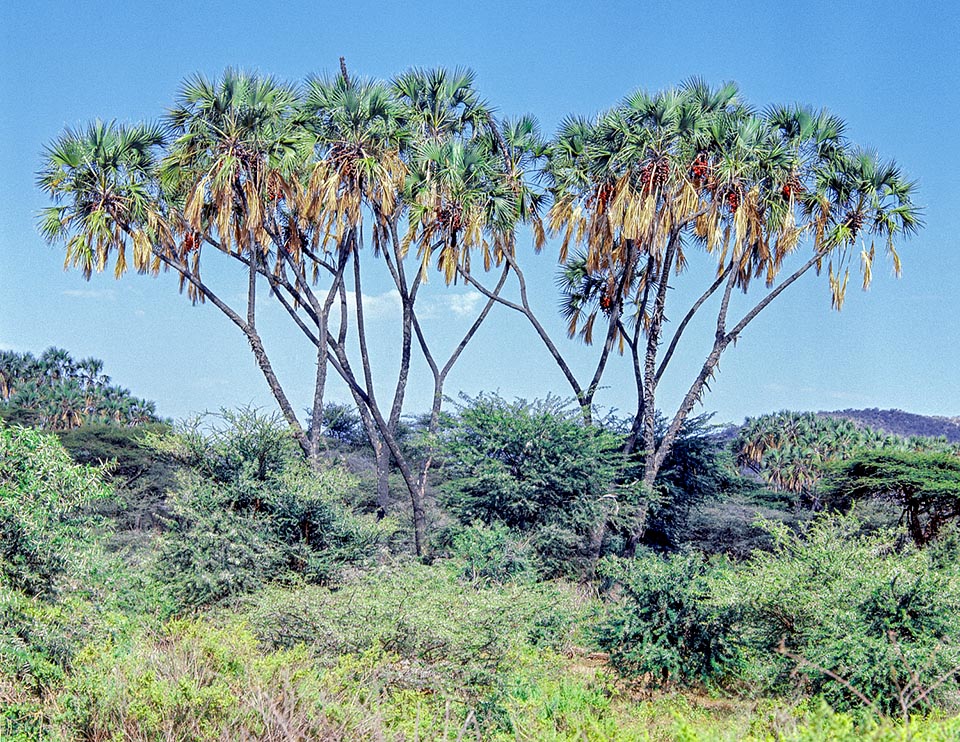 The leaves, of green-grey colour, are costapalmate, wide up to 1,5 metres, a divided in rigid segments, on a long petiole equipped of blackish thorns at the margins.

Dioecious plant, (each individual carries only male or female flowers), it produces short hanging inflorescences and ramified which come out between the leaves. The fruits are globose or pear-shaped, of glossy brown colour when ripe, 6-7 cm of diameter, with edible pulp and very hard seed, utilized in the past as vegetable ivory for producing handicrafts. It reproduces by seed which germinates in 3-4 months; the sowing is done directly on the ground or in containers, deep at least 50 cm, seen that the hypocotyl which develops from the seed, and at the extremity of which there stands the embryo from which will originate the first leaf, goes down up to these depths.

Palm of great landscape and ornamental value, to be cultivated isolated in wide spaces and in full sun in areas with tropical, subtropical and warm temperate climate, resisting to lowest temperatures around the -3 °C for short periods, on very well draining soils.