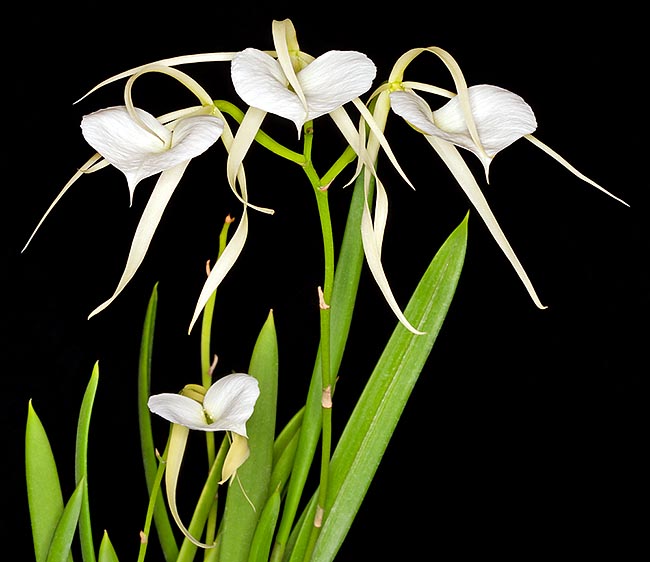 Native to Central America, Brassavola nodosa grows on mangroves but also in arid zones on the cacti © G. Mazza

The genus is honoured to the Italian physician and botanist Antonio Musa Brassavola (1500-1555); the name of the species is the Latin adjective “nodosus, a, um” = knotty, with possible reference to the enlarged base of the stems.

The Brassavola nodosa (L.) Lindl. (1831) is an epiphytic species, lithophytic at times, with creeping rhizome and thin pseudobulbs similar to stems, cylindrical with enlarged base, close, 5-15 cm long, with at the apex one linear leaf only with pointed apex, erect, rigid, fleshy, semi-cylindrical on the back, grooved in front, of dark green colour, 10-30 cm long and 2-3 cm broad.

Terminal racemose inflorescence at the insertion point of the leaf, up to 20 cm long, carrying 1-10 flowers of 7-12 cm of diameter, linear sepals and petals with pointed apex of usually pale yellowish green colour, 5-9 cm long and about 0,3 cm broad, labellum tubular at the base and wrapping the column, then cordate with pointed apex and entire margin, white, 4-6 cm long and 2,5-4,5 cm broad. 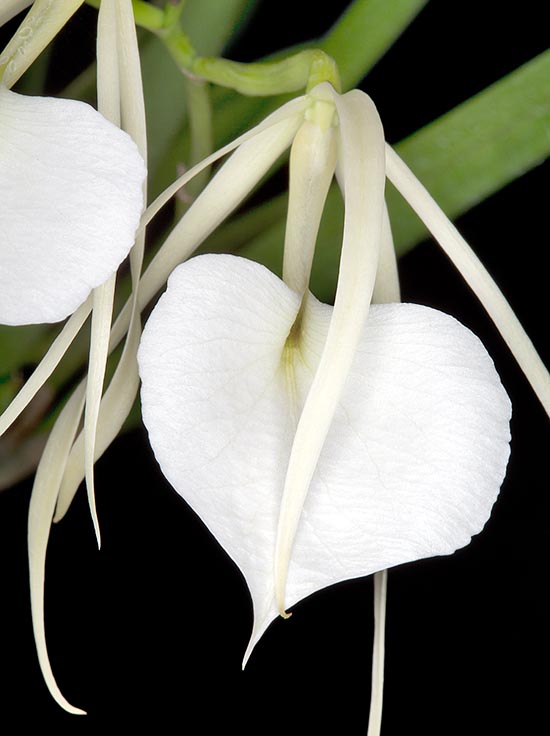 The long-lasting flowers are perfumed and are pollinated by moths, mostly sphingids © G. Mazza

The long-lasting flowers, 2-4 weeks, are pollinated mainly by moths belonging to the family of the Sphingidae (Latreille, 1802). The fruits are ellipsoidal, 3-4 cm long, capsules.

It reproduces by seed, in vitro, micropropagation and by division, at the vegetative restart, with each section provided of at least 3-4 pseudobulbs.

The best known of the genus is an orchid that is distinguished by the intense pleasant perfume the flower emit during the night, the blooming distributed all over the year and the facility of cultivation, thanks to its adaptability to different ambient conditions, therefore also indicated for beginners.

It requires high luminosity, also direct sun in the morning and at the sunset, medium high temperatures, 22-32 °C, with lowest winter values not under the 16 °C, high humidity, 60-80%, and constant air movement; in the wild can stand drought periods, but always with high atmospheric humidity and in presence of occult precipitations (dew).

The waterings must be abundant during the growth, allowing to partially dry up before giving water again, more spaced in winter during the vegetative stasis, if the temperatures are on average lower, is to be kept practically dry, but without ever leaving the pseudobulbs and the leave to wrinkle, increasing in the meantime the atmospheric humidity.

The fertilizations, duly alternated with the waterings to avoid the salts accumulation at the roots, are to be done during the growth with hydrosoluble balanced products, with microelements, at ¼ of the dosage reported on the package.

Cultivable in pot with medium-large sliced bark fragments and charcoal with addition of inert materials, like polystyrene, for an optimal aeration of the roots, which easily get rotten with stagnating humidity, or mounted on trunks, bark or rafts of cork or of arborescent ferns. The repottings, when necessary, are to be done by the vegetative restart.