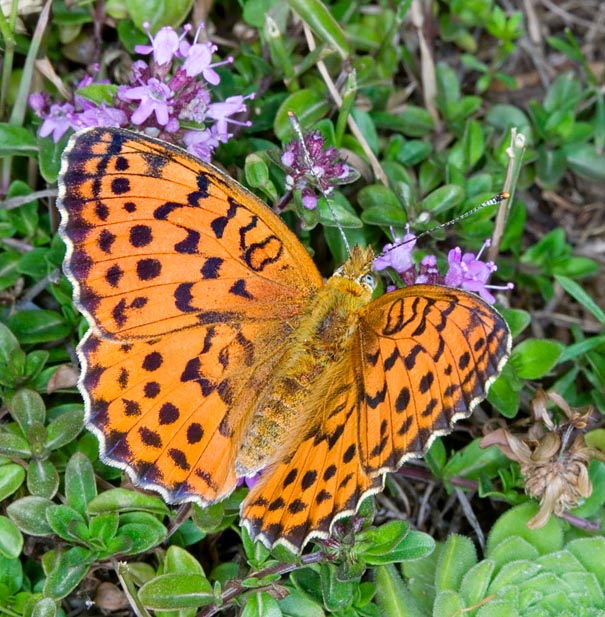 The Brenthis daphne is a rather particular butterfly in its genus because ve note that both wings, especially the fore ones, are very rounded. It reaches about 5 cm of wingspan © Giuseppe Mazza

The Marbled fritillary (Brenthis daphne Denis & Schiffermüller, 1775) belongs to the order of the Lepidoptera and to the family of the Nymphalidae.

This family considered the most consistent among those grouping the diurnal lepidopterans and includes more than 6.000 species diffused in the entire world.

The marbled fritillary is a quite particular butterfly in its genus as has both wings, especially the fore ones, very rounded. Also the side of the upper wing presents a much convex and prominent curvature, so much to emphasize even more the roundness of its shape.

Very close to the group of the Argynnes with which often is confused, the Brenthis daphne belongs to a genus grouping some butterflies very similar each other and who coexist overlapping also in the same areas.

The name of the genus Brenthis is dedicated to Brentis, one of the Cyclops. Brenthis was also one zone of the city of Troy famous for its magnificence.

Most beautiful and romantic the name of the species daphne also taken from the Greek mythological tradition. One of the various versions of this story narrates that Daphne was the favourite love of the god Apollo. This one boasted with Cupid for his continuous love action but this last, jealous, made him fall madly in love of the nymph Daphne hitting him with two arrows: the first with golden tip for having him in love madly and the second with the contrary aim, in iron, for having him rejected by his beloved. During the ceaseless love pursuit, Daphne for hiding and avoiding Apollo, asked to be transformed into a laurel tree and since then this tree became the preferred by Apollo so much to gird his head for ever with a wreath formed by its leaves.

The vulgar European names are: in English: Marbled Fritillary; in German, Brombeer-Perlmutterfalter; in French, Nacré de la ronce or Dephné; in Dutch, Braamparelmoervlinder; in Catalan, La perlada de l’esbarzer and in Spanish, Laurel. 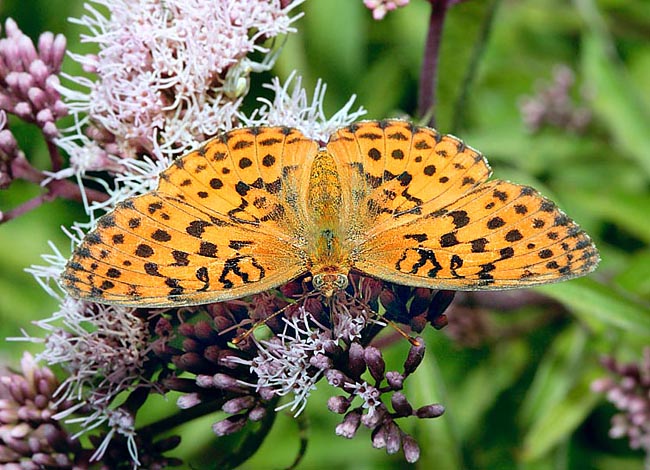 It is a butterfly present in southern Europe in a restricted belt including northern Spain and southern France, Italy and southern Germany, the Balkans and Greece. It is present in Asia in a belt that from Turkey through Iraq and ran and touching Mongolia and China reaches Japan. It is therefore absent in the northern as well in the southern belts of our continent.

The marbled fritillary loves bushy valleys and clearings where the bramble grows, its host plant, but is often found also in uncultivated fields and dry meadows. Unlike Brenthis ino, does not love the humid lands and the heathlands but loves arid zones with low bushes and often lives in small, very concentrated, colonies. It is present from the sea level up to 1.500 m of altitude practically up to where grow the plants of the genus Rubus.

The marbled fritillary is a good-sized butterfly exceeding as an average the 5 cm of wingspan. It has the upper alar face of a nice bright orange colour, marked by irregular round spots and a series of black lines of various sizes and drawing. The borders of both wings have on the margins small black lozenges lined and spaced so to seem a natural indenture. In the sub-marginal area we note a single row of black pots of various sizes running parallel to these lozenges.

It is much alike Brenthis hecate but is lacking of the double series of round and parallel spots placed in the post-discal and sub-marginal area. It distinguishes from the Brenthis ino for a much more evident colouration of the upper face of the wings and more marked drawings. The marbled fritillary differs from both species due to the rounded shape of the wings, very marked, and for the lower face of the rear wing presenting a belt of suffused yellowish colour close to another one, more pronounced, of violaceous lilac colour. 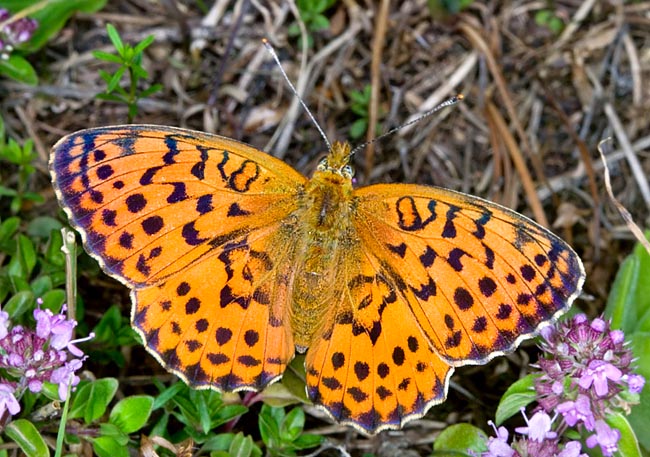 Its presence is related mainly to plants of the genus Rubus and follows them up to 1500 m of altitude © G. Mazza

There is no sexual dimorphism.

It has strong dark brown antennae with rounded and flattened tips, of slightly paler colour.

It flies from May to all August with variations depending on the area where it lives. It is a monovoltine species and has a fledging period rather regular in the time.

As a matter of fact, it is observed constantly present while feeding on marble flowers even if does not disdain other essences, remaining and persisting in the area for entire days.

It doesn’t have a nervous flight like the Argynnis even if rapid in the movements and the deviations and is easily approachable when concentrated in sucking the nectar from the flowers.

It lays the eggs on the lower face of the brambles (Rubus fruticosus and Rubus idaeus) and of the genus Filipendula although if preferring very much more the first essences, but occasionally also on plants of the genus Viola. It hibernates at the stage of egg but in more temperate areas also as small larva. The caterpillar is yellowish and is run by numerous and small dark transversal lines and by an evident white one along the upper back of the body. The entire surface of the larva is covered by rows of small yellowish spiny protuberances.