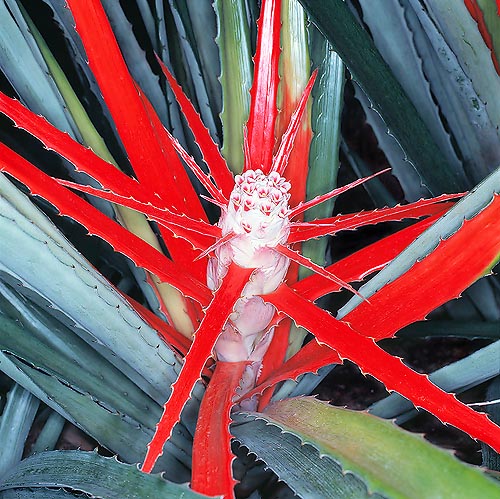 The Bromelia balansae Mez (1891) is native to tropical South America (Argentina, Bolivia, Brazil, Colombia and Paraguay), where it grows in semi-arid areas together with other xerophytes.

Evergreen herbaceous plant, monocarpic (bearing fruit only one time during its existence), acaulescent, terrestrial, it has a rosette of several rigid linear leaves of a green colour on the upper page, green-grey under, long up to 1,5 m and 3 cm broad, thinned and with a long thorn on the apex; the margins of the leaves are furnished with curved, robust, cutting, 5 mm long, thorns.

The central leaves before blossoming become bright vermilion-red. The floral scape, at the centre of the rosette, short and robust, is covered by a thick white tomentum and by bracts resembling to the leaves, of a bright vermilion red, and ends with a composite inflorescence, that is, composed by several spikes which depart from the central axis, almost cylindrical, with a diameter of about 9 cm and 18-20 cm long, formed by pink to red bracts bent inwards, edged by strong thorns and with a thick white tomentum at the base.

The length of the bracts reduces towards the apex to become, the upper ones, shorter than the flowers; these ones are 4-5 cm long with the petals, of a violet colour bordered of white, about 2,5 cm long. The fruits are ovoid, of a green colour becoming orange-yellow when ripe, with a diameter of 2 cm and a length of about 4,5 cm, edible and consumed locally as they are or in juice; the numerous seeds are flat, 5 mm broad, and of blackish colour.

It reproduces by seed, by division and through the robust underground stolons produced. In spite of the decorative inflorescence, it is a plant not much cultivated owing to its dimensions and the robust thorns which characterize it, so much to be utilized, in particular in the origin zones, for forming efficacious defensive barriers. In the same areas, the pulp and the juice of the fruits are utilized in the traditional medicine and the robust fibres obtained from the leaves are used for making ropes, baskets and handicraft objects.

It is suitable for being cultivated in the tropical and semi-arid subtropical climates, and even of Mediterranean type, as it can stand temperatures as low as -9°C, in full sun and on even poor soils, but particularly draining, being subject to rottenness due to water stagnation, especially with low temperatures. Its best positioning, from the ornamental point of view, is in the wide “desert” gardens, where in any case its location is to be well cared, preparing, in case, suitable obstacles for limiting its expansion, as the ripe plants tuft quickly and expand, thanks to their long underground stolons, which colonize, in such way, ample spaces.