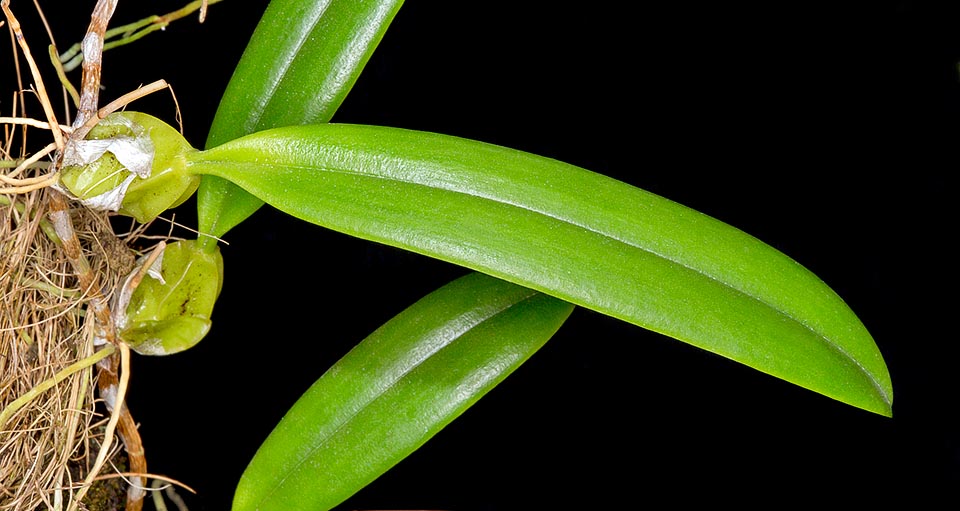 The Bulbophyllum incurvum is an epiphytic miniature orchid native to Madagascar, Mauritius, Réunion and Rodrigues forests, with about 1,5 cm long ovoid pseudobulbs, spaced on a creeping rhizome, rooting at the nodes. They have 4-5 prominent ribs and only one coriaceous glossy leave, intense green, even 8 cm long © Giuseppe Mazza

The species is native to Madagascar, Mauritius, Réunion and Rodrigues where it lives in the forests between 400 and 1000 m of altitude

The name of the genus is the combination og the Greek substantives “βολβός” (bolbos) = bulb and “φύλλον” (phyllon) = leaf, with reference to the leaves growing at the apex of the pseudobulbs; the specific name is the Latin adjective “incurvus, a, um” = curved, bent, with reference to the drooping inflorescence. 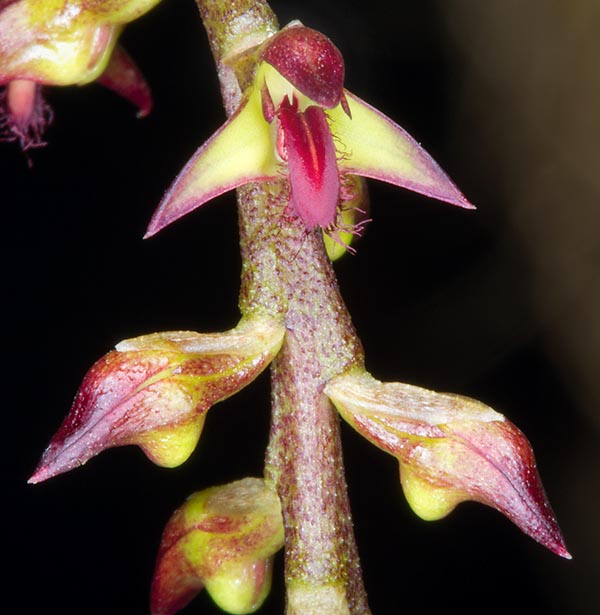 As the specific name suggests, the Bulbophyllum incurvum inflorescence is a drooping spike with several small flowers of 5-8 mm of diameter of variable colour, wholly yellow, to red, to bicolour. Pointed sepals, much smaller rounded petals, and mobile oblong labellum with sleek ciliate margins © Giuseppe Mazza

The Bulbophyllum incurvum Thouars (1822) is an epiphytic species with ovoid pseudobulbs, about 1,5 cm long, with 4-5 prominent ribs, spaced on a creeping rhizome rooting at the nodes and provided at the apex of only one oblong-ovate leaf with emarginate apex, 4-8 cm long and 1,2-1,5 cm broad, coriaceous, of intense green colour and glossy above. The inflorescence, at the base of the pseudobulb, is a drooping spike on an erect 15-25 cm long scape, bearing several flowers of 5-8 mm of diameter of variable colour, from wholly yellow, to red, to bicolour with pointed sepals, rounded petals, much smaller than the sepals, and mobile oblong labellum with ciliate margins.

It reproduces by seed, in vitro, and by division, withe each section provided of at least 3-4 pseudobulbs, at the vegetative restart.

Miniature orchid rare in cultivation, requires semi-shaded position, medium-high temperatures, 22-30 °C, in summer, slightly cooler in winter, with lowest night ones not under the 15 °C, high humidity, 70-85%, and constant ventilation. The waterings must be regular and abundant in summer, more spaced in winter, but without allowing the substratum to dry up completely, utilizing rain water, demineralized or by reverse osmosis. It is usually mounted on trunks, bark or rafts of roots of arborescent ferns with some sphagnum at the base of the plant, less frequently in pots or baskets rather wide in order to allow the pseudobulbs to freely expand, utilizing a compost formed by bark fragments and charcoal with possible addition of sphagnum to maintain the humidity if the cultivation ambient is rather dry. The repottings are to be done when the compost has deteriorated at the vegetative restart, marked by the emission of the new roots.