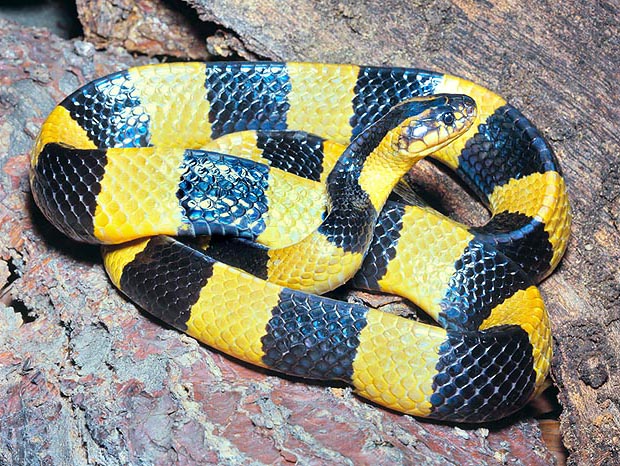 The krait is much venomous. By night it kills cobras, during the day is little aggressive © Giuseppe Mazza

The genus (Bungarus), afferent to the family of the Elapids (Elapidae), has species
mostly distributed in southern Asia and in the Indo-Asian and Indochinese geographic areas.

It is formed by venomous and in some cases very much, serpents, called commonly kraits.

These animals, in the outer morphology, partially resemble to the terrestrial cobras and partially to the coral snakes.

They are often medium-big, are rather lazy during the day, so much to permit even people to manage them, and aggressive by night time; and when they bite a human, the death is practically guaranteed.

One of the most venomous species, object of this text, is the Banded krait (Bungarus fasciatus).

The Banded krait (Bungarus fasciatus), is one of the most known species, amply diffused in the whole Indo-Malaysian region.

A livery formed by wide alternate yellow-black rings allows this splendid and dangerous serpent to camouflage in its choice habitat, the humid locations and in bamboo reeds, utilizing the technique of the somatolysis (please see the text Serpentes).

This serpent may exceed the length of 2 m. The livery, besides having a splendid alternation of wide, bright black-yellow rings, in rare instances, may have a striping of the same colour, with longitudinal distribution; it is probably a mutation.

It has a fairly slender body, with triangular section, with sharp edges on the sides.

The head is narrow, with indistinct neck and great cranial plates, probably useful for moving the soil. The pupils are rounded and scarcely shrinkable. 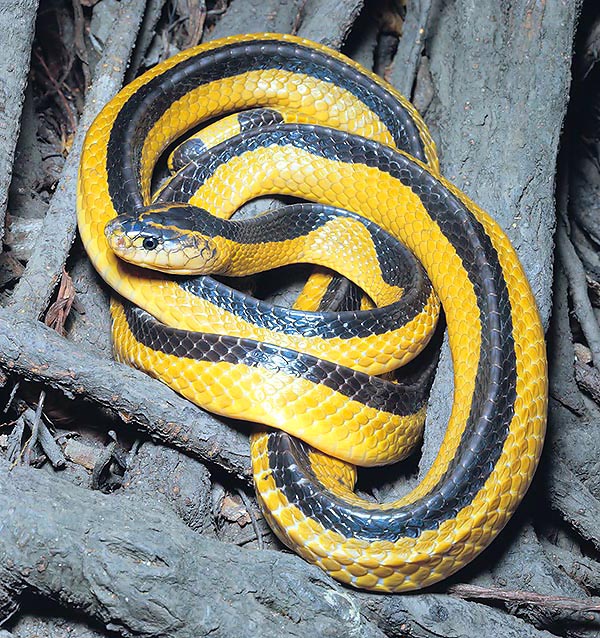 Like all Elapids (Elapidae), the skull has no temporal arches, and for this the mandible is articulated to the cranium by means of a free triangular bone; this allows the serpent to amply open the mouth, and thus it is able to swallow preys with a remarkable diameter.

The venom teeth, placed on the upper maxilla, are of medium length; in resting position they keep adherent to the palate; when the mouth is wide open, they erect automatically, thanks to the traction done by some maxillary ligaments.

The venom glands are much big and contain powerful venom, lethal also for the big mammals, humans included.

It is a complex mixture of various factors which act on the nervous centres; in the human being it causes rapidly the death, in about half an hour, by suffocation as a consequence of the paralysis of the diaphragm.

The kraits, and therefore also the Banded krait (Bungarus fasciatus), are oviparous and lay up to a dozen of eggs at a time.

In the case of the Bungarus fasciatus, the female surveys carefully the eggs (the same also for the Bungarus candidus), till the hatching; in other species, the eggs are abandoned to their destiny in a rudimentary lair.

All the species of this genus have a nocturnal life, and for this, they are called crepuscular species and live, preferentially, as said for the Bungarus fasciatus, in marshy areas and reed beds.

Owing to this style of life, the Bungarus fasciatus and the other species of the same genus, even if provided of a highly toxic venom, are little dangerous for man, as during the night, when they are dangerous, the human being is usually resting.

During the day, in fact, the Bungarus fasciatus, has a rather lazy and calm nature; if menaced, it curls hiding the head under the spires and remains in this position even if disturbed or even killed.

In some villages of south-eastern Asia, during the day the boys amuse themselves by carrying around these serpents, pushing them with poles, at no risk.

Quite different is, however, the behaviour of the Bungarus fasciatus and of the other kraits after the sunset: by that time they transform in aggressive predators with agile and extremely fast movements.

They are specialized in hunting other serpents (ophiophagous), usually ignoring other preys; they attack, without hesitation and killing them, the cobras which are well bigger than them and then they eat them.

It is for this reason that, besides their idleness during the daily hours, these serpents, very rare case among the venomous species, are not persecuted by the man.

The Bungarus fasciatus, for the moment, does not seem to be in danger of extinction and is not even subject to rarefaction.