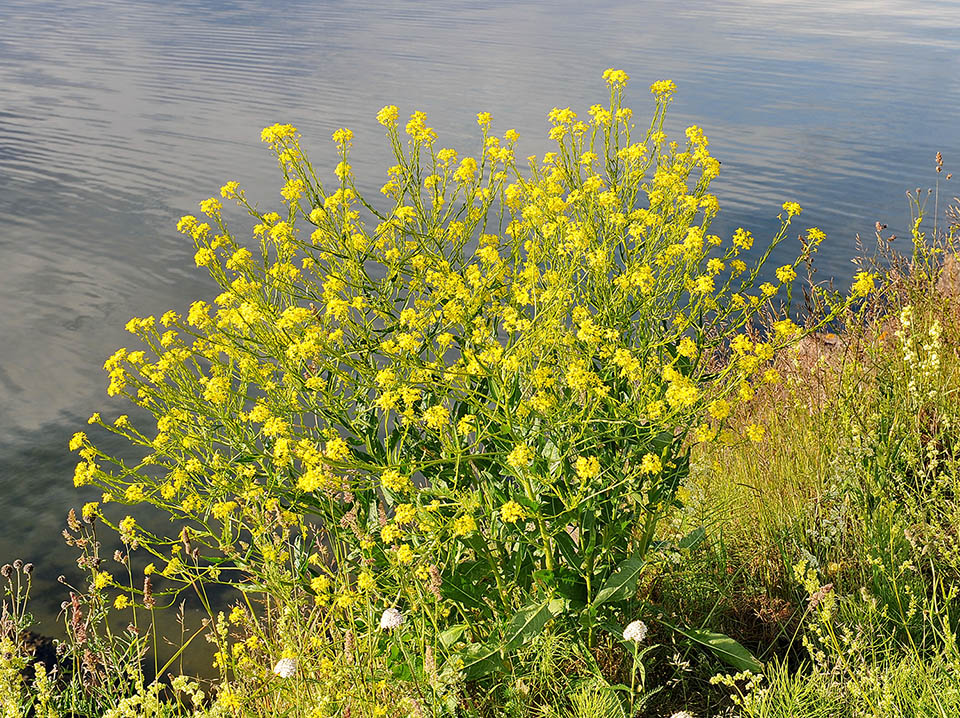 Bunias orientalis L. is a species of the tribe Buniadeae, family Brassicaceae, whose origin area is quite controversial.

Some Authors assert that B. orientalis is native to the Armenian highlands, others indicate a much ampler original range of distribution that includes Caucasus, southern and central Russia, western Siberia, south-eastern Europe up to the southern limits of today’s Slovakia and of eastern Hungary.

Studies done on the genetic variation of the nuclear and plastidial genomes have shown two main genetic pools, one in the Iranian-Turanian region and one in the near northern Caucasus. They began to diverge and expand about 930 thousand years ago. The cycles of glaciation and of deglaciation of the Pleistocene have favoured the following expansion of a “European” genetic pool about 230 thousand years ago that has separated from the Caucasian-Iranian-Turanian genetic pool. Though the European genetic pool is genetically less diversified, it has largely served for the colonization of part of western and northern Europe.

It is interesting to note that B. orientalis has only one sister species, B. erucago L. and these two species are the only ones inside the tribe Buniadeae that is thought to be more than 12 million years old. This is a rare phenomenon inside the family Brassicaceae and this might indicate only a small evolutionary potential for diverging and adapting to the new environmental conditions. Nevertheless, during the last 250 years, the species has diffused quickly in all central Europe and in Scandinavia, in all Asia towards China, and also in the USA and in Canada because accidentally favoured by man. 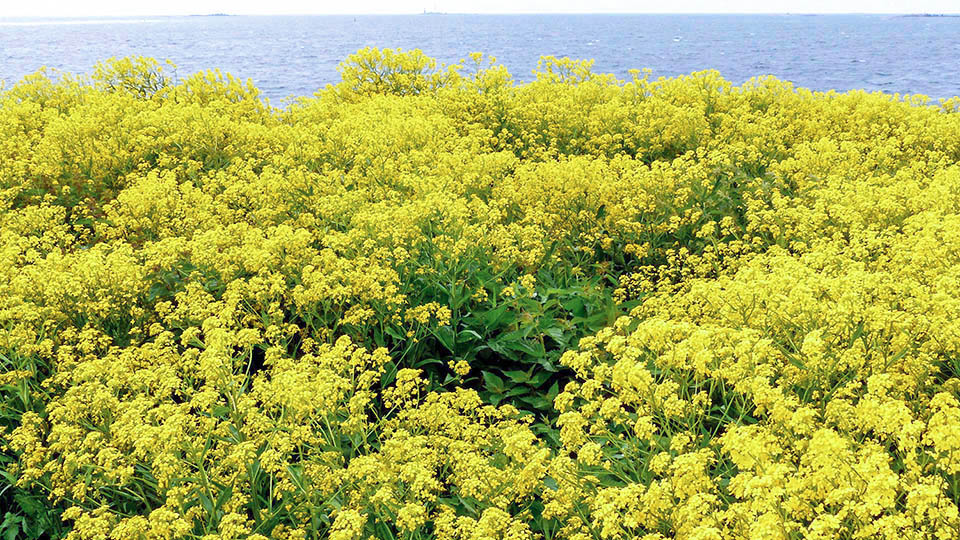 Diffused by man with the seeds present in the hay or as useful plant, it’s an allelopathic invasive species releasing in the soil substances to inhibit other species’ growth © Raino Lampinen

It has diffused thanks to the presence of its seeds in the hay that accompanied the animals during the military actions of the Russian-Persian wars, at the beginning and mid of the eighteenth century and in Europe by the Russian troops that pursued Napoleon’s retreating army (1812). A later diffusion, during the nineteenth century, was determined by the development of maritime navigation also on the internal water channels of some European nations and by the development of rail transport in the Russian Empire and in the neighbouring countries. In other areas, B. orientalis has arrived during the second half of the XIX century, probably introduced with cultivation imported from Russia.

In some countries of western Europe, the species arrived in the XVIII or XIX century (for instance, in 1731 in Great Britain and in 1814 in France) because it was cultivated as a vegetable and forage plant. In America the species has been reported for the first time in 1944 in the island of Grand Manan, in Canada, but it is probable that it had arrived a long time before because introduced, as officinal plant, by the followers of John George Rapp (1757-1847) who from Germany moved to Pennsylvania where he founded, in 1805, the religious sect called Harmony Society, dissolved in 1905. This hypothesis originates from the observations that plants of B. orientalis are still present in the areas close to the settlements of these religious communities. In 1958 the plant was reported in the state of Wisconsin (USA) and a census made in 2008 has evidenced its presence on the eastern coast and in the region of the Great Lakes in the USA, and in Québec, Nova Scotia and British Columbia in Canada.

In its native range, B. orientalis is found in the alpine and subalpine prairies whilst in the exotic range it mainly invades the disturbed habitats such as road and rail borders, uncultivated land, pastures, grassy sites in urban areas, landfills. 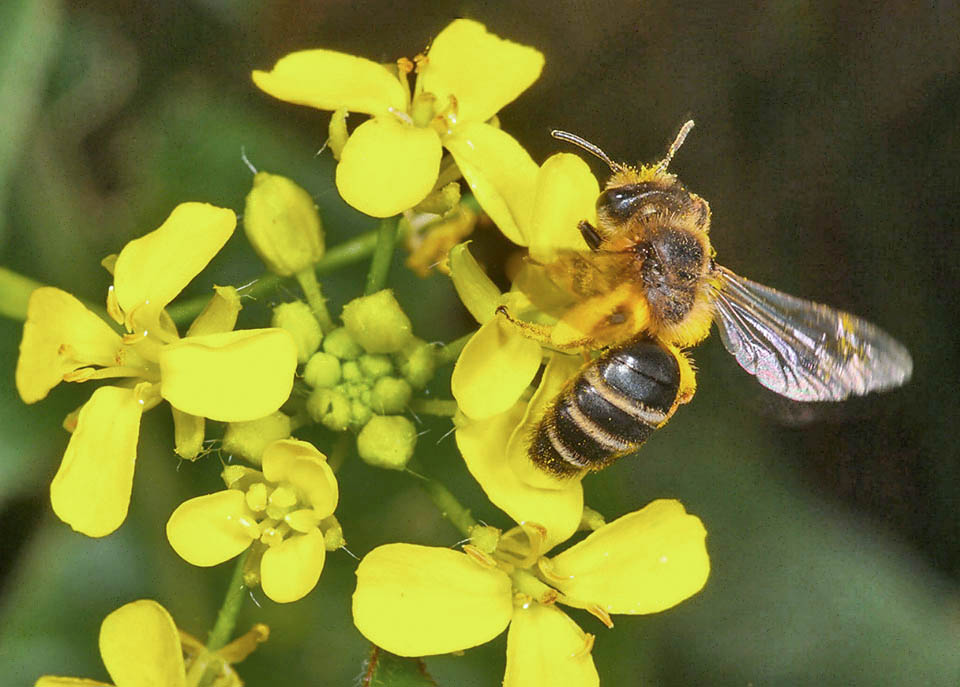 Moreover, the nectar irresistibly attracts bees and bumblebees that thus neglect the native species. The seeds production may amount even 1000 per m2 of soil and this plant, very resistant to diseases, parasites and water stress, can reproduce vegetatively as can regenerate even from the small fragments of the roots © Bernhard Jacobi

B. orientalis is a very successful colonizing species that is rapidly expanding and this is cause for concern due to its impact on the autochthonous species of the invaded areas. As a matter of fact, it has been observed that the production of nectar, relatively low per each flower, becomes important due to the high number of flowers, being a precious source of food for the bumblebees (Bombus spp.), melliferous bees and syrphid flies (Syrphidae). This alien species in this way causes a negative impact on the native species as it lowers the frequency of visits done by the pollinators and therefore reduces their reproductive possibilities. Moreover, B. orientalis increases its invasive capacity for other peculiar characteristics such as its biochemical toxicity, the allelopathic effect (production of secondary metabolites released in the ground that inhibit the growth of the other species), presence of lasting underground organs, etc.

The name of the genus Bunias is of uncertain etymology. According to some Authors it might come from the old Greek “buniás”, turnip, after others from “buonòs”, hill, typical discovery environment of the plant. The specific epithet orientalis comes from east, oriental, to indicate the area of origin. Vulgar names: Turkish warty-cabbage, Hill mustard, Turkish rocket.

B. orientalis is a 30-130 cm tall perennial herbaceous plant, very resistant to drought thanks to its deep taproots. It has a ramified stem, glabrous or with scattered hairs. The highest ramifications of the inflorescence are reddish and are covered by showy multicellular glandular hairs. The leaves, that form the basal rosette, are up to 40 cm long, pinnatipartite, with narrow divisions and a triangular terminal lobe. The upper leaves are smaller and less carved. 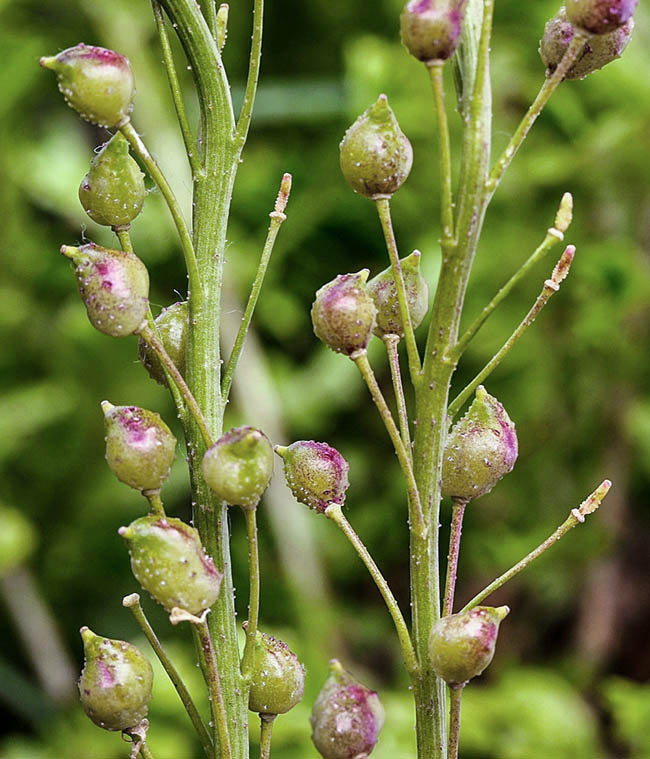 The fruits are indehiscent and woody silicles of irregular and ovoid shape. The plant is edible, with promising medicinal virtues. Rich in proteins, lipids and ascorbic acid, is finally an excellent forage plant for the © John A Petyt

The flowers, arranged in racemes, are hermaphrodite and have yellowish, 2,5-3 x 1-1,5 mm, oblong, glabrous sepals and yellow, obovate, 6-7 x 3-5 mm petals with one 1-2 mm thin claw.  The stamens are 6, tetradynamous, 1,5-3,5 mm, yellowish filaments and 0,8-1 mm oblong anthers. The nectariferous glands are confluent and subtend the base of the stamens. The ovary has 2-4 ovules and is surmounted by an entire stigma. Blooming takes place from May to August.

The fruits, with small irregular protuberances, ripen from July to September and are indehiscent silicles, woody, of ovoidal shape, compressed on a side and 6-10 mm long and with two monosperm cavities. The seeds, two per fruit, are subglobose, without wings, with smooth tegument and measure 2-3 mm. The production of seeds may reach up to 1000 seeds/m2 of ground. Moreover, this plant is able to reproduce vegetatively because it can regenerate even from small fragments of its roots. It is a plant very resistant to diseases, parasites and water stress.

The chromosomic diploid number is: 2n=14.

B. orientalis is present in several human diets and is consumed in salads and in soups.

In the Mediterranean area the leaves represent the first and the last vegetables of the season. They are utilized raw when young, cooked when getting older. In the former Union of Soviet Socialist Republics (USSR), the inflorescences, that have a pleasant sweetish taste, similar to cabbage, were utilized in lieu of the broccoli even if rather small. In Turkey, the stem, deprived of the bark, is consumed raw.

Furthermore, B. orientalis is a fodder plant for cattle, sheep, pigs and rabbits with a high food value.

In the past this plant was utilized in homeopathic medicine, as antiscorbutic, for the so called “lymphatic disease” caused by immune deficiencies.

The plant is rich in proteins, lipids, ashes, ascorbic acid, carotene, etc., however, still now, few are the studies that render evident its medicinal properties. A recent study has evidenced that alcoholic extracts of the plant have antimicrobial activity against Candida albicans and Salmonella enterica subsp. enterica. These results are encouraging for subsequent studies of microbiological and pharmacological types.

As B. orientalis is an invasive species and represents a danger for the autochthonous species, several techniques have been implemented for its eradication. The elimination can be done mechanically uprooting all the plants before flowering (May-June) and disinterring all the root system, an operation that must be repeated for two years or more. Recourse may be done also to the chemical control, utilizing specific herbicides, but it is necessary to follow the use indications to reduce the risks inherent in these products.