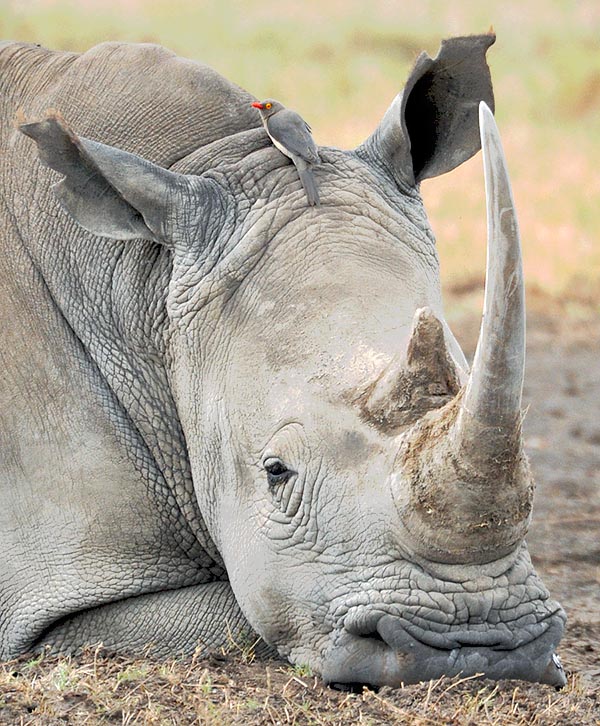 The red-billed oxpecker would have remained unknown to the many if it had not been for the countless nature documentaries filmed in Africa that had shown it at work on the back of some big animal, firmly clung to the hair of the unwitting host, teetering and in balance while is taken for a drive all over the savannah.

The oddity in assisting to such a sight, has drawn the attention of anyone who has been present to this view, impressing indelible memories in the minds of all.

In this way a bird relegated in remote and wild locations that no one ever might have been able to observe if it were not for the media or, for the luckiest, through the tourism, has become recognized and remembered.

Surely, not all do know its scientific name and not even the species it belongs to but all know that it stays up there pecking the ticks that infest those wild animals and is integral part to the African landscape that scrolls on the screen.

The Red-billed oxpecker, also more generically called Red-billed tickbird (Buphagus erythrorhynchus Stanley, 1814), belongs to the order of the Passeriformes and to the family of the Buphagidae even if a good part of the scientific world has considered it, and still many do so, as belonging the more vast family of the Sturnidae.

Formerly they thought that its union with the quadruped host, a certainly appreciated cooperation seen the accurate disinfestation to which is submitted the chosen animal, was a mutual assistance finalized only for such purpose.

In fact, the red-billed oxpecker looks, among the hair of the animal, for the parasites, the larvae of the insects, but even more the ticks, particularly those of the genus Boophilus common in the tropical countries, eating a remarkable quantity of them. 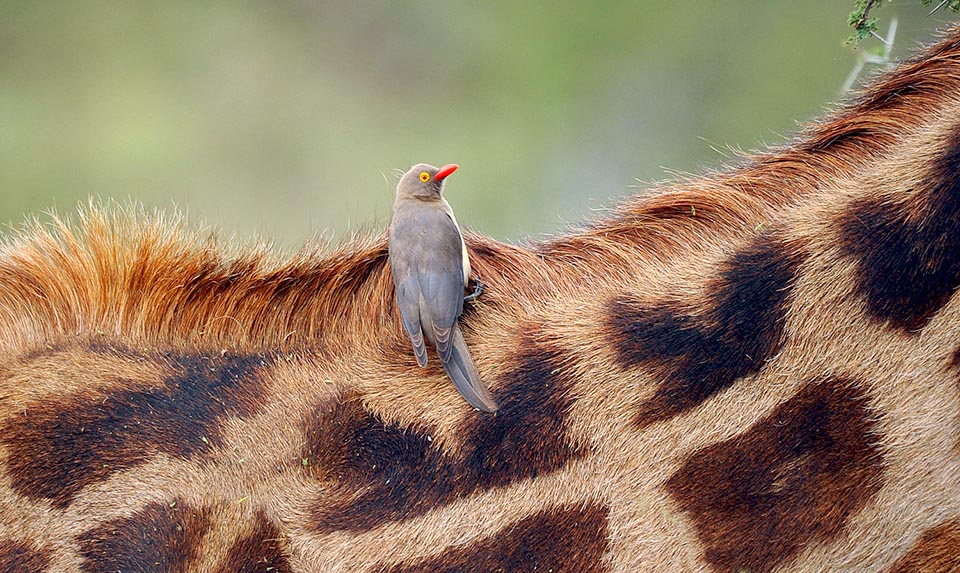 It’s also called tickbird due to the parasites it finds into the host hair, without forgetting lice, larvae of dipterians, mucus, exudates and even feces and blood © Colombo

However, more detailed studies have evidenced that the bird does not content in detaching a tick from the skin but also makes a slight wound that causes the exit of some drops of blood it avidly gulps. Moreover, it seems that this wound is not allowed to heal as the bird or other passing-by colleagues, comes often back to suck blood from the same injury. 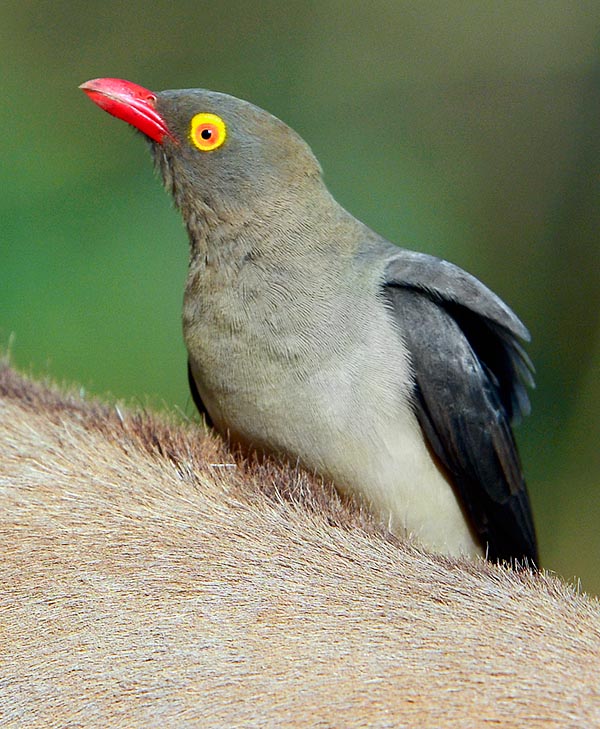 Touch of colour, the scarlet red bill, robust, tapered and pointed, 2 cm long, can strongly pinch the tick to take off tearing with the sharp tip the coriaceous skin on which it is stuck © Gianfranco Colombo

Haemophagous species, a blood sucker as is the Galapagos Islands Darwin’s Sharp-beaked finch (Geospiza nebulosa) or the most known Common vampire bat (Desmodus rotundus). Who knows if the bystanders would prove the same sympathy for this bird if they knew these particular habits?

We have mentioned before that the red-billed oxpecker is generally called Red-billed tickbird, in fact this common name actually indicates two species very similar each other, in the morphology as well as in the behaviour besides the fact that they exactly share the same range.

The other species is the Yellow-billed oxpecker and is classified as Buphagus africanus Linnaeus, 1766.

The etymology of the scientific binomen has various interpretations. The rigourous one originates from the Greek “bous” = ox and “phagein” = to eat, hence eater of oxen, due to the known habit of pecking the animal making it bleed. There is then the mythological version, always of old Greece, that identifies in Buphagus, son of Iapetus, an Arcadian hero who hosted Iphicles, brother of Heracles who, wounded, was cared by him up to his demise. Buphagus than was in his turn killed by Artemis who considered him as the monster “eater of oxen”.

Moreover, Buphagus is also one of the many nicknames given to Heracles. Intrigues of the past for us not easy to understand but so much loved by the old mythological cultures.

The species erythrorhynchus always from the Greek “eruthros” = red and “rhunkhos” = bill, clearly referred to the particular red bill. 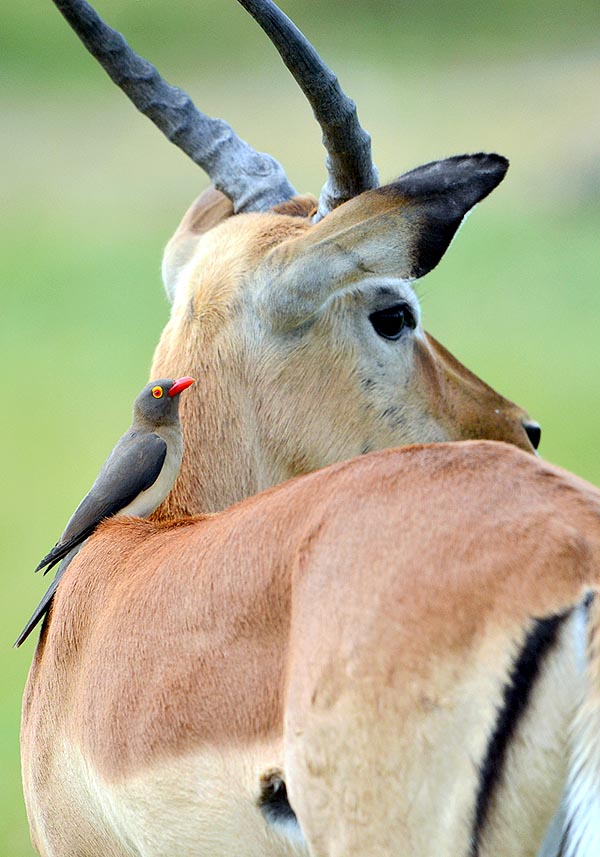 The legs, with strong fingers and well nailed, allow it to stay well clung, like a woodpecker, to the hosts hair, where spends almost all the day and even mates during the rain season © Gianfranco Colombo

The ref-billed oxpecker lives in East Africa along the Rift Valley in its complete extension from north to south. It is present from Sudan and the Horn of Africa up to the north-eastern part of South Africa occupying all the prairies and savannahs of the continent.

However, its presence is not constant and diffused but quite concentrated in some areas more than in others, leaving spaces completely uninhabited. Usually, they follow the course of the rivers, the valleys and the prairies densely inhabited by herds of animals.

The red-billed oxpecker is sedentary and limits in wandering in its territory following the short migration of the herds.

Being a very social bird especially outside the nesting period, it regularly performs evening movements to reach the common roosting even at a remarkable distance from the feeding sites.

Typical habitats are the endless grasslands of East Africa inhabited by those immense herds of herbivores from whom it depends for its feeding even if victims of its excursions are not only wild animals but also domestic ones, provided infested by ticks or larvae of haemophagous insects.

It is not uncommon to see it on cows, goats or donkeys grazing while clung like a woodpecker to a trunk, inspects thoroughly every corner of the mantle without forgetting the pinnae, the borders of the eyes, the axils and the undertail.

Usually all the big herbivores of the savannahs are object of its visits, with some preferences in relation to the state of infestation of the various species made by the parasites.

As a matter of fact, it would appear that some ruminants are less infested than others by ticks, reason why they are often exempted from disinfestation visits. Even-toed and Odd-toed ungulates starting from the dimensions of the impala up to the giraffe, the buffalo and the rhino, the hippo and zebra, are the usual destinations of these surveys. Conversely, the elephant seems to be intolerant of its presence and drives it away as soon as it stops on its back. 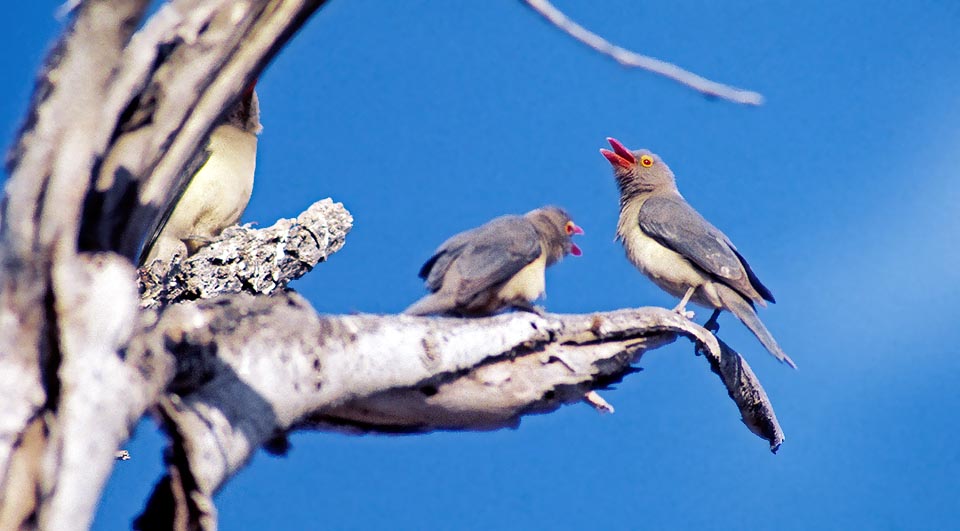 The nest is placed in the hollow of the trees. Buphagus erythrorhynchus is a very social animal that at the sunset reaches rowdy common roosting © Giuseppe Mazza

The behavioural characteristics of this bird are quite similar to those of a Starling (Sturnus sp.) or of a Myna (Acridotheres sp.). A rowdy behaviour, a diffused sociality, common roosting and close relationship with the animals. Also the livery is little evident with a uniform plumage of light brown grey colour stronger on the covert feathers, on the tail, on the head and on part of the neck and tending to pale cream on the chest, abdomen and rump. 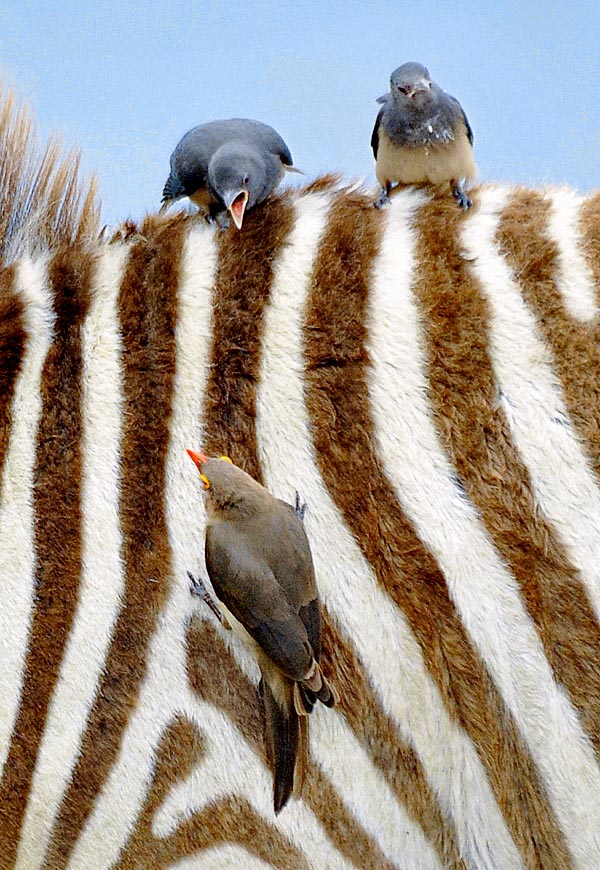 Mother with recalcitrant chicks, at school, on a zebra’s back, to learn the job © Gianfranco Colombo

Only touch of colour the scarlet red bill, robust, tapered and pointed, very strong and a few centimetres long. A bill capable to pinch strongly the tick to detach or to tear with the tip the coriaceous skin on which it is stuck. It has also robust legs with strong fingers and well nailed, suitable for staying well clung to the hair of the animal on which it is perched. The flight is rapid and powerful, somewhat adulatory and almost always accompanied by the typical cry “dric biss dric biss” of connection, repeated continuously.

The congener yellow-billed oxpecker has the livery exactly the same, but the bill that is yellow with red tip instead totally of this colour as is the case of our species. Even if the yellow-billed oxpecker is much less common, both share the same range, therefore are seen together willingly hunting on the same animal and at times frequenting common dorms. Only an attentive observation of this particular may allow the exact distinction between the species.

The dimensions of the red-billed oxpecker are of about 23 cm of length, more than 30 clm of wingspan and about 60/70 g of weight. There is no sexual dimorphism in the adults livery and the young have a plumage very similar to theirs.

The couple is monogamous and lasts for the reproductive season only. The red-billed oxpecker nests during the rain season or around the end of the same, when the humidity is at the maximum and favours the growth of the infesting insects on all savannah animals. The nest is placed in the hollow of a tree and is filled up pell-mell with dry grass, rootlets and even hair of animals on which are laid 3 to 5 eggs of cream colour densely spotted of reddish.

The brooding lasts a couple of weeks and the chicks come to life featherless and blind but soon they will wear a light whitish down that will be soon replaced by the juvenile plumage. The care of both parents will allow the nestlings to be ready for their first flight after about 3 weeks but they will however remain in family for long time staying linked till the next nesting. In fact it often happens that the small adults of the previous brooding help the parents in the care of the following. The red-billed oxpeckers nourish of haemophagous insects, of dipterans, of lice, of larvae they find among the hair of the host but also of cerimen produced by the ears or by the eyes of the animal, of mucus, of exudates, of scales of dried skin and also of small quantities of dung that it takes always directly from the body of the subject together with the larvae hidden in it. 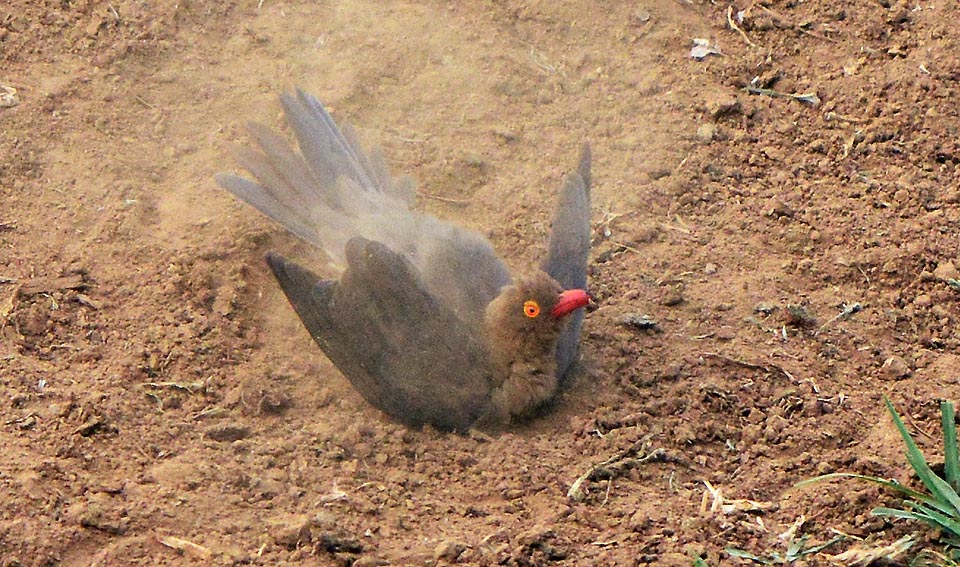 In the arid regions where it lives the cleaning is dry, raising clouds of dust. The red-billed oxpecker is not an endangered species © Gianfranco Colombo

Curious peculiarity: the courting and the mating occur unfailingly on board some animal, showing that their world is practically limited to this environment. A love favoured by an unwitting pronubas that practically lulls with its shambling gait, the budding love of two anonymous small birds. A little bit of romance in the middle of the harshness of life in the savannah.

It is not an endangered species.