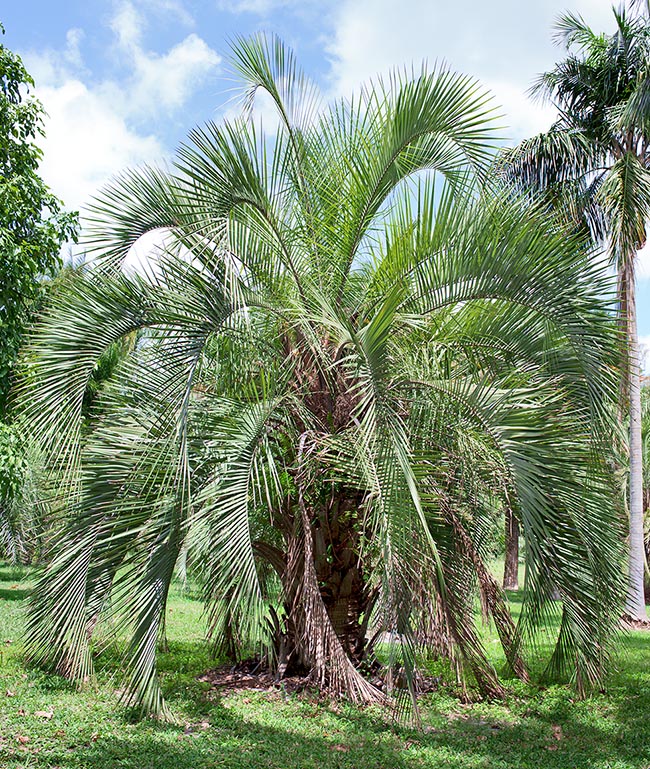 Up to 6 m tall, Butia eriospatha grows in the forests of Araucaria of southern Brazil. The edible fruits are the best of the genus Butia. Vulnerable in nature, would deserve a better horticultural diffusion © Giuseppe Mazza

The species is native to southern Brazil (Paraná, Rio Grande do Sul and Santa Catarina) where it grows in open areas or in the forests of Araucaria between the 700 and the 1200 m of altitude.

The Butia eriospatha (Mart. ex Drude) Becc. (1916) is a monoecious species with solitary stem, up to about 6 m tall with a diameter of 30-50 cm, of greyish colour, wrinkly, with the persistent traces of the bases of the old leaves. The leaves, on an up to 1 m long petiole, provided at the margins of robust spines, are pinnate, highly and elegantly arcuate, 2-2,6 m long, with rigid leaflets, linear with acute apex, arranged regularly along the rachis to form a V, in the median part about 70 cm long and 2 cm broad, of green grey colour.

Inflorescences among the leaves (interfoliar), 0,9-1,3 m long, with ramifications of the first order, initially enclosed in an oblong-lanceolate spathe covered by a thick pale brown tomentum. Unisexual yellow flowers arranged in triad (one female flower between two male ones) but in the terminal part where are present only male flowers, these ripe before the female ones (proterandry), this favours the crossed fecundation, in any case the species is self-compatible and even an isolated specimen can reproduce. The fruits are globose druopes of yellowish colour when ripe, of 1,8-2 cm of diameter, with woody, hard, endocarp, of 1-1,5 cm of diameter, containing 1-3 seeds. It reproduces by seed in draining loam maintained constantly humid at the temperature of 25-28 °C, with germination times starting from 2-3 months.

Very decorative palm, but little diffused, with rather slow growth, similar in the appearance to the more commonly cultivated Butia odorata, (for long time known in cultivation as Butia capitata) from which it differs mainly for the thick tomentum that covers the outer surface of the spathe. Robust and resistant to the low temperatures, besides in the tropical and subtropical zones, is cultivable with ornamental purposes in the temperate climate zones, even if humid, where when adult may bear values of temperature, if exceptional and of very short duration, up to -12 °C, with damage to the foliage, but recovery in the successive summer. Of course, where may occur such extreme values it is advisable to arrange in advance appropriate winter protections. Requires full sun, perfectly draining soils, acidic or neutral, and regular waterings in the climates characterized by long warm and dry summers, even if it can resist to drought periods.

Fruits with juicy and poorly fibrous pulp, of particularly pleasant taste, better than that of the other Butia, are consumed fresh or utilized for prepating jams, juices and an alcoholic drink very appreciated, they are also employed as food for the livestock and are an important resource for the local fauna. Finally, the fibres of the leaves are utilized for cordages, baskets, mats, hats and other handicrafts.

Owing to the progressive loss of its habitat, due to the anthropic pressure, the species has been inserted in the red list of the IUCN (International Union for the Conservation of Nature) as “vulnerable” (species under risk of extinction in nature).