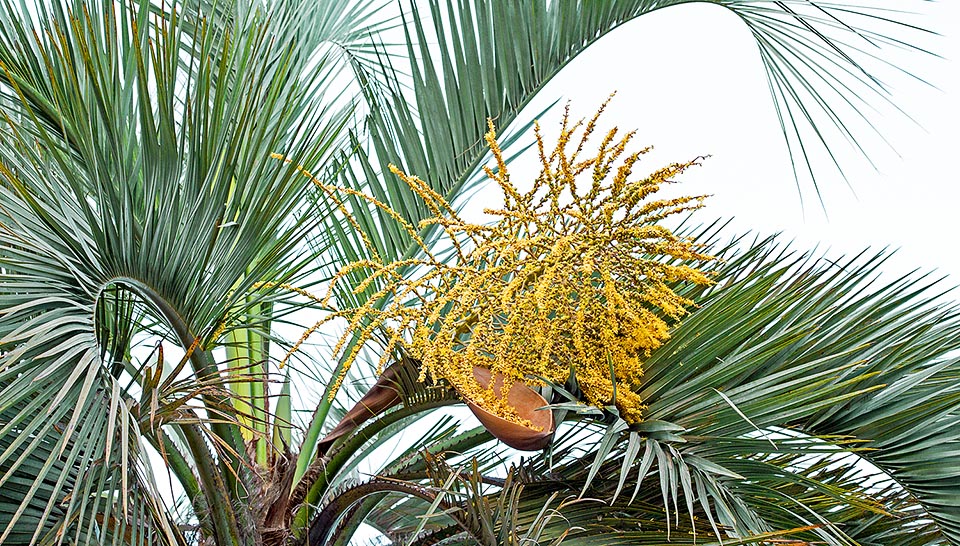 Native to South Brazil and Uruguay, Butia odorata is a monoecious species, that is with the two sexes on the same plant, with short very ramified inflorescences © G. Mazza

The species is native to southern Brazil (Rio Grande do Sul) and Uruguay where it grows in the prairies (pampas) on soils mainly sandy at low altitudes.

The generic term comes from the Portuguese diction of the Brazilian vernacular name of a palm that means “spiny”, “toothed”, with reference to the spines present on the petioles; the specific name is the Latin adjective “odoratus, a, um” = odourous, fragrant, with the fruits, particularly fragrant when ripe. 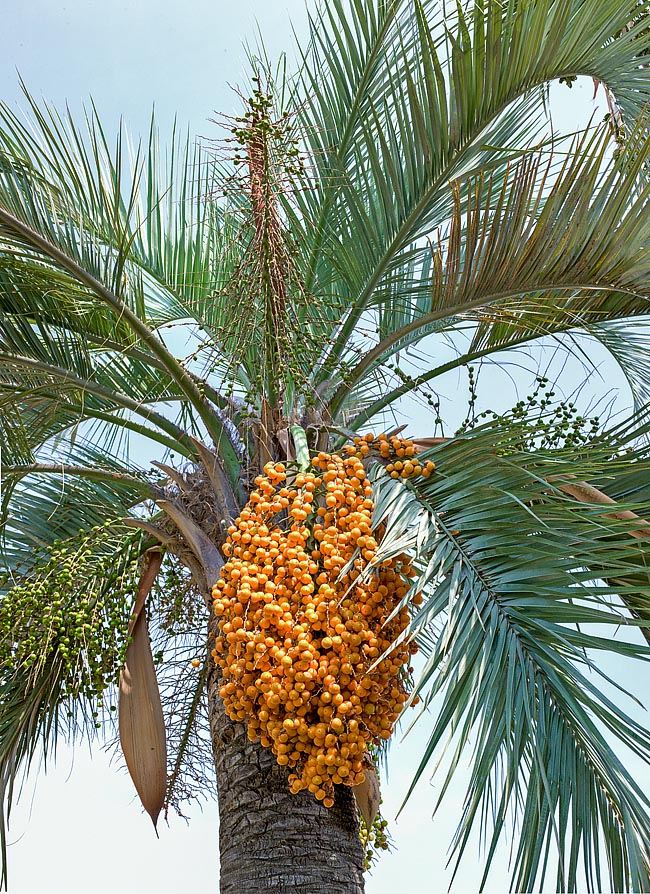 An even 8 m tall trunk and very perfumed fruits when ripe, as the scientific name given to the species © G. Mazza

The Butia odorata (Barb.Rodr.) Noblick (2011) is a monoecious species very variable with solitary stem, up to about 8 m tall with a diameter of 30-50 cm, of greyish colour, with perstistent traces of the bases of the old leaves.

The leaves, on an up to 1,3 m long petiole with serrate-spiny margins, are pinnate, imbricate and arranged in a slight spiral, arcuate, 1,5-1,8 m long, with rigid leaflets, linear with acute apex, arranged more or less irregularly along the rachis in groups of 2-5 and spaced 2-3 cm to form a V. The leaflets are long in the median part about 70 cm and 2,4 cm broad, of a more or less glaucous colour with a thin white waxy patina below.

The inflorescences generate between the leaves (interfoliar), on a 0,7-0,8 m long peduncle covered by a thin waxy layer, waxy and powdery, are bout 0,9 m, with ramifications of the first order, initially enclosed in an erect spathe, woody, oblong-lanceolate acuminate, about 0,5 m long, externally of pale brown colour, smooth. Unisexual flowers of a usually yellow colour arranged in triad (one female flower between two male ones); the inflorescences display the phenomenon of the proterandry (the male flowers ripen before the female ones) that favours the crossed fecundation.

The fruit is a usually globose-depressed drupe when ripe of mainly yellow colour, less frequently orange and reddish orange, of about 2-2,8 cm of diameter and 1,8-2 cm long, with globose endocarp, hard, of 1-1,3 cm of diameter, containing 1-3 seeds.

It reproduces by seed in draining loam maintained constantly humid at the temperature of 25-28 °C, with germination timees of around 8 months, these can be reduced to 1-3 months by breaking the endocarp with a common nutcracker and planting the seed(s) contained.

Since some time the most diffused among the Butia cultivated in USA and in Europe, in particular in the Mediterranean area, has had quite a troubled life form the taxonomical point of view. 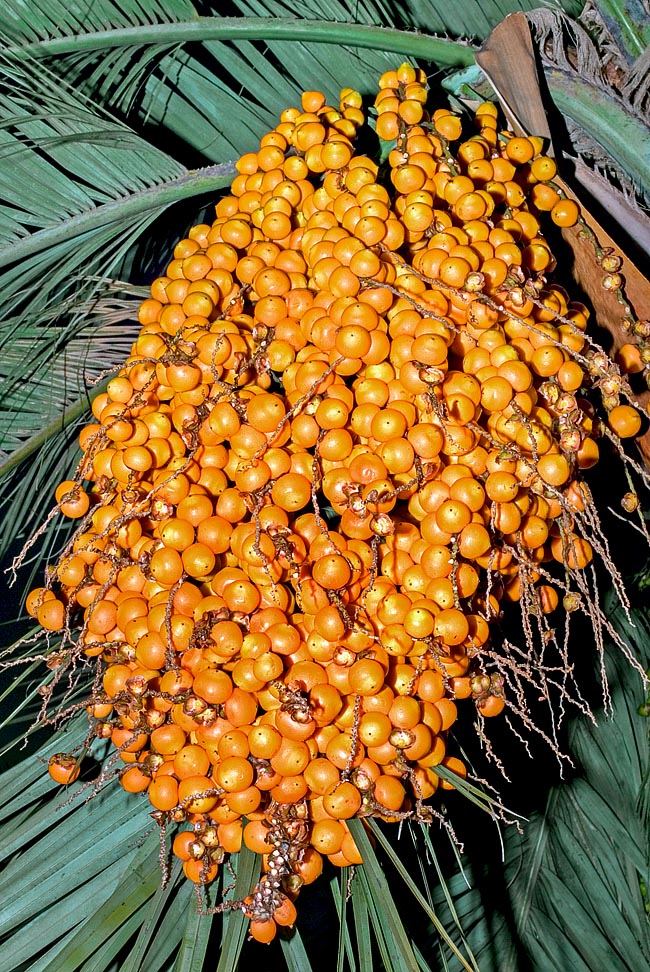 In 2011 it has been separated from the similar Butia capitata due to geographical criteria and the abundant roundish fruits, at times little depressed, that are consumed fresh or used for jams, juices, sorbets and for alcoholic drinks © Giuseppe Mazza

In brief, it was initially described with the name of Cocos odorata Barb.Rodr. (1891), and concerned the populations of southern Brazil and of Urugua, later on, due to its characteristics very similar to isolated populations of Butia capitata (Mart.) Becc. (1916), located further north of Brazil, it was proposed to consider it as a variety of them and described as Butia capitata var. odorata (Barb.Rodr.) Becc. (1916), but in fact for about one century this has been considered (together with other names) only as synonym and the plant has been cultivated and diffused as Butia capitata.

In 2011 the American botanist Larry Roland Noblick, deep connoisseur of the American palms, has brought back the populations south of Brazil and Uruguay go the rank of species with the name of Butia odorata.

The success of this palm in the temperate climate and of Mediterranean type zones comes, besides its ornamental characteristics, also from its good rusticity, as it can resist when adult to values up to about -10 °C, provided exceptional and very short lasting.

Preferably it requires full sun and is not particular about the soil, acidic to slightly alkaline, provided draining, even if it prefers the sandy ones. Well rooted it resists to drought periods, but grows much faster if periodically irrigated in the climates characterized by long warm and dry summers.

A further interest for this species is given by the fruits, abundantly produced, having a very scented and pleasantly acidulous pulp, though rather fibrous, rich of antioxidants, particularly carotenoids, mineral and vitamin C.

In its origin sites the fruits are consumed fresh or utilized for making jams, juices, sorbets and alcoholic beverages, and the leaves, rich of resistant fibres, employed for creating handicrafts artistic and of common use.