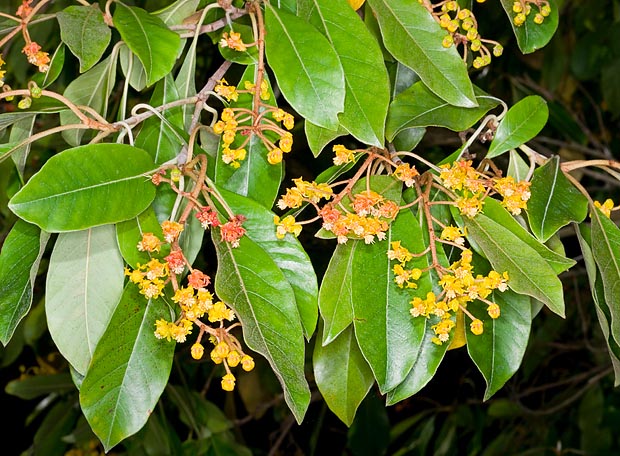 This species is native to North America (Mexico), Central America (Belize, Costa Rica, El Salvador, Guatemala, Honduras, Nicaragua and Panama), South America (Bolivia, Brazil, French Guiana, Guyana, Paraguay, Peru, Surinam and Venezuela) and to the Caribbean (Barbados, Cuba and Puerto Rico), where it grows in the tropical deciduous forests as well as in the savannahs, from the sea level up to about 1800 m of altitude.

The derivation of the name of the genus is not quite clear, it seems to come from the Greek “byrsa” = skin, because many species belonging to the genus are utilized in their origin countries for the leather tanning.

The name of the species comes from the combination of the Latin words “crassus” = big, thick, and “folium” = leaf, with obvious reference. 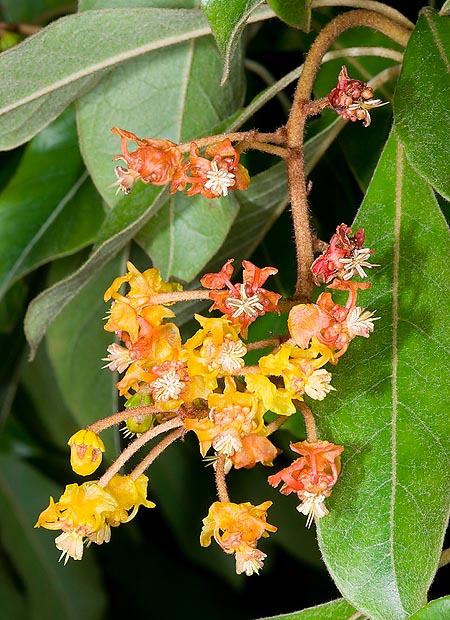 The Byrsonima crassifolia (L.) Kunth (1822) is a shrub or a semi-deciduous tree, tall up to about 10 m with diameter of the trunk of 25 cm, greyish fissured bark and fairly thin branches on which are evident the scars of the fallen leaves; the young branches are thickly tomentose.

The leaves are opposite, entire, oblong or elliptic, dark green, coriaceous and glossy on the upper page, covered by a thin rusty-coloured tomentum below, and are 4-14 cm long and 3-6 cm broad.

The inflorescences are in compact, erect, 10-15 cm long racemes, carrying several flowers with a corolla with five roundish petals, tapering at the base, 6 mm long, of an initially yellow colour, than orange, with ruffled edges and 10 pale yellow stamina. The flowering period is long, 4 to 8 months depending on the climate, even if the single tree blooms for much less time.

The fruit is a globular, yellow when ripe, drupe, of about 2 cm of diameter, in some selected varieties even of 5-7 cm, with yellow pulp surrounding the yellow woody endocarp containing 1-3 seeds.

It reproduces by seed which germinates in 3-6 weeks, in sandy soil kept humid at the temperature of 20-22 °C.
The first fructification occurs by the third, fourth, year of age. Air layering or grafting is utilized for reproducing a particular variety.

It is a vastly diffused species in the wild, but is little cultivated outside from the origin zones, being the fruits almost exclusively utilized by the local populations. It is not particular for what the soil is concerned, as it may grow well on the sandy as well as on the rocky ones, even it better grows up in the well drained ones and with addition of organic substance.

It is cultivable in full sun in the tropical and subtropical zones, being already sensitive to temperatures around the 0 °C, even if it may bear exceptional and isolated drops of temperatures of some degrees for a very short period. Well rooted plants can tolerate long dry periods. 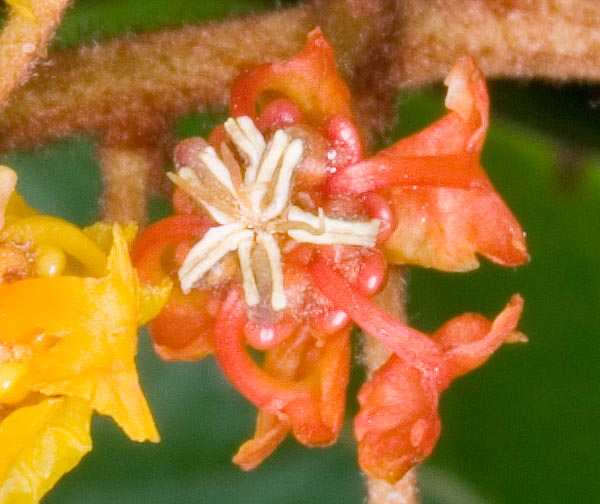 The fruits, with its acidulous, but usually pleasant, taste, are consumed fresh, cooked or is utilized for preparing ice creams or for getting refreshing drinks and liquors. The ripe fruit decays rapidly, but it maintains for months if conserved in water; in this way it is often sold in the local markets.

The bark contains tannins up to about the 28% and oxalic acid, for this reason the plant was utilized in the past for the treatment of the leathers. The wood, hard but flexible, is utilized in the rural buildings, for realizing tools, and also as firewood as well as for producing charcoal. A colorant is obtained from the peel of the fruit.

Parts of the plant, the bark especially, are utilized in the traditional medicine for their antimicrobic and antymicotic properties. The local populations of Venezuela put in water the shredded young branches in order to stun the fishes and catch them.

Finally, the tree has also a limited employment as ornamental plant, thanks to its luxuriant foliage and the rich blooming, but it would deserve a greater diffusion as such.

→ To appreciate the biodiversity within MALPIGHIACEAE family please click here.