The Amazonian cacajao is a monkey whose biology is largely unknown. One thing is certain, though: the redder its face, the healthier it is. 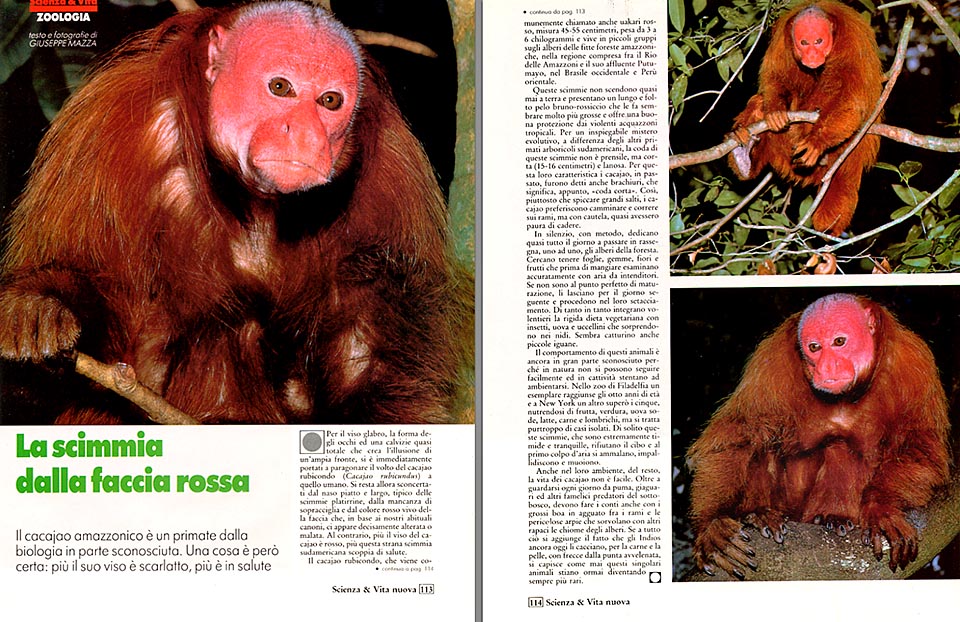 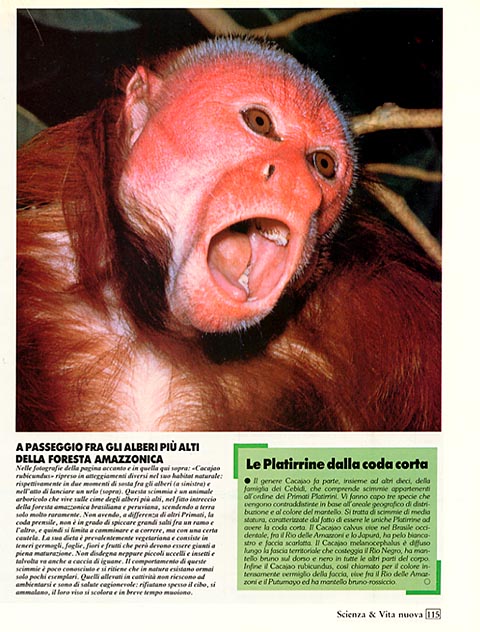 Due to the hairless face, the shape of eyes and an almost total baldness, which creates the illusion of a spacious forehead, we are immediately led to compare the face of the Rubicund Cacajao (Cacajao rubicundus), to the human one.

We are then baffled by the flat and wide nose, typical of the Plathyrrhina monkeys, the absence of eyebrows and the bright red colour of the face, which, as per our usual parameters, looks to us definitely abnormal or sick.

On the contrary, the redder is the Cacajao’s face, the healthier this strange South American monkey is.

The Rubicund Cacajao, which usually is also called Red Uakari, measures 45-55 cm., weighs from 3 to 6 Kg., and lives in small groups in the thick Amazon forests, in the area placed between Amazon river and its tributary, the Putumayo, in western Brazil and eastern Peru.

These monkeys almost never land and exhibit a long and thick brown-reddish coat, which causes them to look much bigger, and provides a good protection against the violent tropical showers.

For an inexplicable evolution mystery, unlike other arboreal South American primates, the tail of these monkeys is not prehensile, but short (15-16 cm.) and hairy. Due to this peculiarity, in the past, the Cacajaos were called also Brachyurs, which means, in fact, “short tail”. Therefore, instead of taking great leaps, the Cacajaos prefer to walk and run on the branches, but carefully, as if they were afraid of falling down.

Silently, methodically, they consecrate almost all the day to explore, one by one, the trees of the forest. They look for tender leaves, buds, flowers and fruits, which, before being eaten, are accurately examined with an air of connoisseurs. If they are not at the perfect point of ripening, they leave them for the next day, and go on in their sieving.

From time to time, they willingly complete their otherwise rigid vegetarian diet, with insects, eggs, and small birds found in the nests. It seems that they catch also small iguanas.

The behaviour of these animals is still mainly unknown, seen that it is not easy to follow them in nature, and they have difficulty to grow in captivity.

In the zoo of Philadelphia, a specimen reached the eight years of age, and in New York, another one passed the five, living on fruit, vegetables, hard-boiled eggs, milk, meat, and earth worms, but, unluckily, these are very uncommon cases.

Usually, when in captivity, these monkeys are extremely shy and quiet, they refuse the food and upon the first cold, get sick, turn pale, and pass away.

Also in their habitat, however, the life of the Cacajaos is not easy. Besides guarding against pumas, jaguars, and other hungry predators of the forest, they have also to take care of the huge boas which lie in wait between the branches, and the dangerous harpy eagles, which, together other birds of prey, fly over the tops of the trees.

If to all this, we add the fact that Indios still nowadays are chasing them, with poisoned pointed arrows, for the flesh and the fur, we easily understand why these odd animals are getting always more and more rare.

Cacajao : odd Amazonian monkey with a red face was last modified: May 23rd, 2019 by Giuseppe Mazza
error: Content is protected !!