The Salmon-crested cockatoo or Moluccan Cockatoo (Cacatua moluccensis Gmelin 1788) pertains to the order of Psittaciforms (Psittaciformes), to the family of (Cacatuidae), and genus Cacatua. This wonderful bird belongs to the group called of the white cockatoos, due to the complete white colouration from the body to the head, apart the voluntarily erectile crest which, as the common name implies, is salmon coloured. Like the other members of the genus Cacatua (white as well as black), and the members of the genus Eolophus, also the salmon-crested cockatoo is characterized by a very strong call, almost deafening, and by a remarkable physicality and mobility which render them difficult to breed in a domestic environment; indeed, their purchase is not at all recommended.

Until the year 1996 the IUCN considered this wonderful bird as “vulnerable species”. Nowadays, it classifies it as “extinction threatened species”, present in the red list and protects its natural Indonesian populations, by means of the Species Survival Programs (SSP), whilst the CITES forbids its trade for commercial purposes. Going back a few decades, during the seventies of the XX century, this bird, in Indonesia, had become object of desire of collectors, or simple persons, who wanted it as ornamental bird in their homes.

As it adapted fairly well to the captivity, even if with the already advised reservations for the domestic environments, the Indonesian breeders took advantage of this situation for creating a real trade, with the establishment of breeding farms, where they were grown and made to reproduce, in order to sell abroad thousands of specimens. In 1987, the Indonesian Direction Directorate General of Forest protection and Nature Conservation has forbidden its breeding and the export from Seram (known also as Ceram, Seran, or Serang), island of the Indonesian province of Maluku, in the Moluccan Islands. In spite of this prohibition, these birds were still sold until 1990 in the Ambon Island and in the city of Jakarta, Indonesian capital.

The population has then continued to decline, also for the deforestation activity present in those regions. Nowadays, the wild population is thought to stand, by the zoological biologists, between the 2.000 and the 8.000 units, even if, counting the specimens present in the zoological gardens, in reproduction, after some authors, we may reach the amount of about 10.300 birds.The ornithological biologists Bowler and Taylor have shown that the Cacatua moluccensis is more common in the north-eastern part of Seram Island, in a zone where the poaching is more difficult. 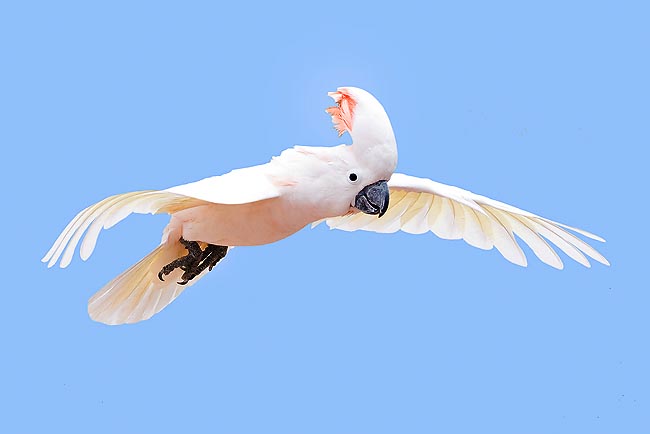 They are endemic to Indonesia, in particular to the Moluccan Islands, Seram, Ambon, Saparua and Haruku.

They are birds mainly carrying an arboreal life, even if they may move on the ground for picking up ripe fallen fruits of which they nourish. They mostly colonize the woody pluvial tropical areas. Their extremely robust beak allows them to break the shell of the Brazil nuts; they eat also various types of seeds, figs, bulbs and roots, wild onions and also some coleopteran larvae. When captive, their diet may be integrated with cores of cabbage, cauliflower and pepper, pine kernels and peanuts.

Their morphology, in the general lines, is similar to that of other species of the genus white Cacatua such as the Pink cockatoo (Cacatua leadbeateri), the White cockatoo (Cacatua alba), etc. They stand among the largest members of the genus Cacatua, with a length of 50 cm, of which 17 interest the tail, and have an average weight of 850-900 g. Each wing is 31 cm long, the beak is dark grey, curved and robust, the foot is zygodactylous. There is absence of sexual dimorphism; male and female have the same dimensions.

When excited, the large crest, of salmon colour, may erect voluntarily up to 18 cm of height, and at the climax of anger, they also ruffle the feathers of the neck, the body, and even the long and ample ones of the tail. They may live up to sixty.

When in captivity, they need fairly large aviaries, where they can stretch their wings and beat them, but not for flying, as, seen their size, they can hurt themselves.

The Moluccan cockatoo coexists in the wild with other species of white cockatoos, indeed, when in captivity this presence stimulates of the 75% their fecundity as shown by studies performed in various zoological gardens.

The male builds up the nest, where the female, during the mating season (they may get even two broods per year), lays 2 to 4 eggs. Unlike other psittaciforms, the male of salmon-crested cockatoo alternates with its partner in the hatching, usually during the day. The eggs are incubated for 28 days. The pullets remain in the nest, as an average, for 10-11 weeks, at times until 12. When captive, the pairs which have had the possibility to breed their progeny are sociable and calm, whilst those to which the breeding has been hindered show aggressiveness phenomena between the partners.