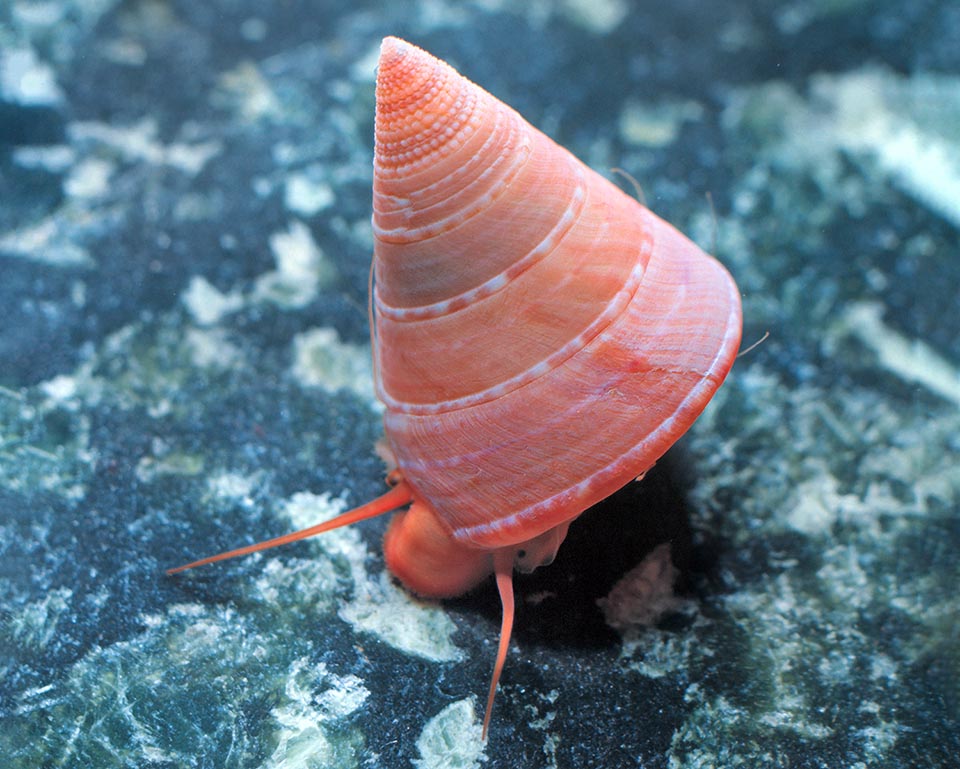 The shell of the Calliostoma conulus, common along the Mediterranean and adjacent Atlantic coasts, always appears polished, because of the presence of a mucus that avoids the incrustations and collects food particles. Unlike most of the Trochoidea, normally herbivorous or microphagous, it is a carnivorous species © Giuseppe Mazza

Most of the members of the superfamily Trochoidea are species of herbivores or microphages, as indeed is the norm in the Vetigastropoda. The Trochus conulus (from the Latin conulus = small cone) of Linnaeus, belongs to a very particular evolutionary line in the adaptive radiation of the trochoidal vetigastropoda. As a matter of fact, it is presently classified in the genus Calliostoma (from the Greek καλός, -ή , -όν, beautiful, and  στόμα, -tos, mouth), in the family  Calliostomatidae, that includes carnivorous species, with documented feeding on cnidarians and hypothesized also on poriferans and tunicates.

Calliostoma conulus (Linnaeus, 1758) is a species common in the Mediterranean, present also in the Atlantic from the north of Spain up to the Macronesian archipelagoes (Açores, Canaries and Madeira), in relatively shallow waiters but even up to 200-300 m of depth. It is also characterized by a certain morphological and chromatic variability, such to lead to suspect that under this name actually more species are being classified.

To the peculiar trophic ecology in respect to the other trochoids, do join some significant anatomical differences, such as a cuticularization of the mouth cavity, of the strong jaws and one peculiar radula, all adaptations probably linked with the carnivorous feeding of the Calliostomatidae. 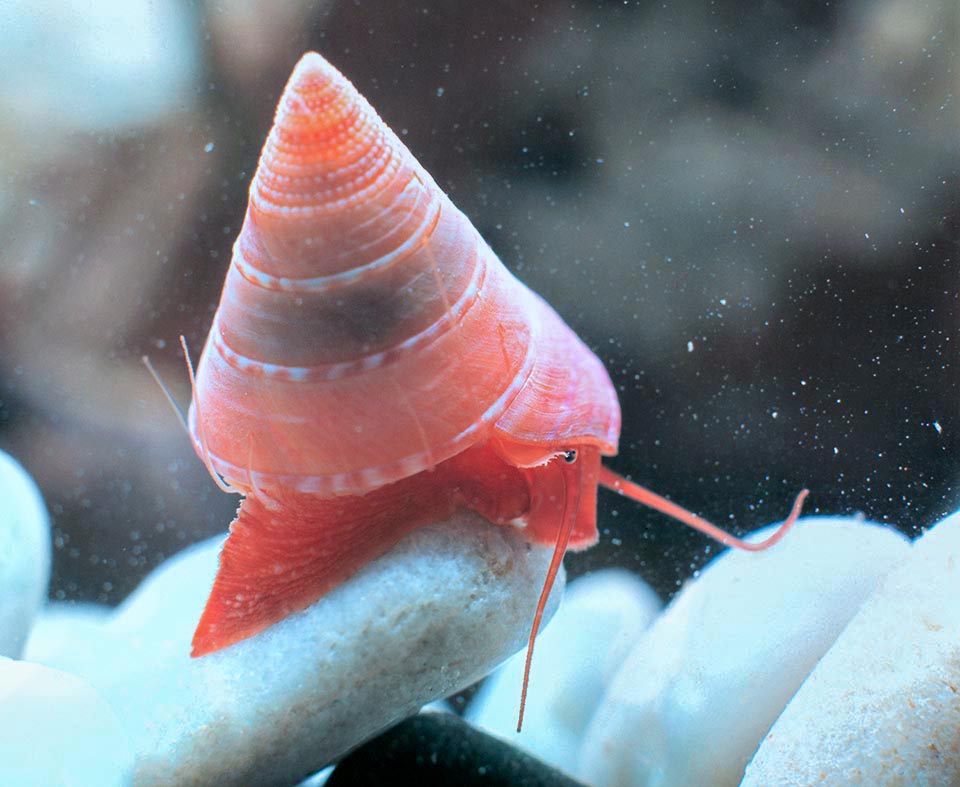 Lateral view of the same, while moving on the rocks of the Ligurian seabed, in Italy. We note the eye and the epipodial tentacles. In the adults the shell measures 10-20 mm © Giuseppe Mazza

A similar species, the Calliostoma zizyphinus (Linnaeus, 1758) is known for its continuous activity in cleaning the shell with deposition of mucus, in order to avoid the establishing of fouling organisms as well as to integrate the feeding with possible organisms that remain trapped into the mucus.

The North Atlantic observations concerning Calliostoma zyziphinus report the reproduction in spring-summer, with external fecundation, deposition of eggs in gelatinous bands, even tens of centimetres long, and the newborns getting out upon hatching as creeping young  (without documented planktonic phase).

The taxonomy of the Calliostoma of NE Atlantic is still very problematic and it is not clear if some taxa – among which, for instance, Calliostoma dubium (Philippi, 1844) – are synonyms of C. conulus or a distinct species.