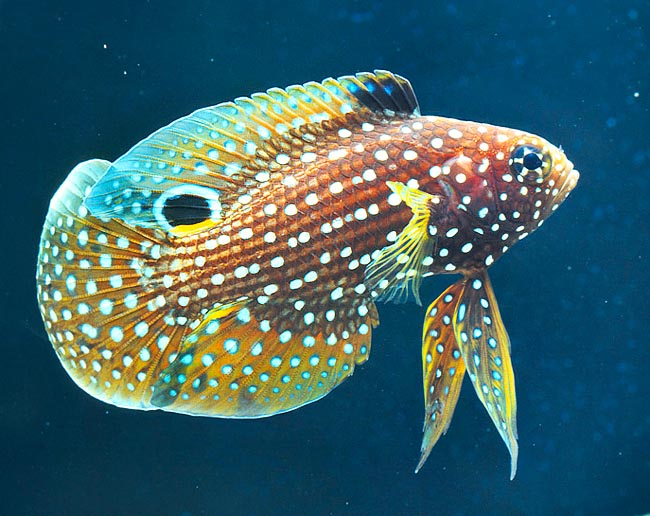 The Comet (Calloplesiops altivelis Steindachner, 1903) belongs to the class of the Actinopterygii, the ray-finned fishes, to the order of belongs to the class of Perciformes and to the family of Plesiopidae which counts only 11 genera and 38 species, animals under many aspects similar to the Serranids, hence the Italian name of Comet grouper.

The name of the genus “calloplesiops” comes from the Greek “kállos” = beauty, “plesios” = near and from “opsis” = look, that is, a fish which closely embodies the concept of beauty.

Nevertheless, it could also be believed that it derives from “kállos” = beauty, and “plesiops”, the genus Plesiops hat belongs to the same family of the Plesiopidae.

Plesiops was the first genus to be described by Oken in 1817, and from it derived the genera Paraplesiops (Bleeker,1875) = simmilar to Plesiops, Acanthoplesiops (Regan, 1912) = spiny Plesiops and our Calloplesiops (Fowler & Bean, 1930) which could be translated as beautiful Plesiops.

The name of the species “altivelis” comes from the Latin “altus” = tall and “veils” = sails, and therefore, “with tall sails” with an evident reference to the fins.

It is present in the tropical waters of the Indian and Pacific oceans. Indicatively, we find it from East Africa to the Red Sea, the Seychelles, and the Maldives, in the Chagos archipelago, at Christmas Island, in Australia, Indonesia New Guinea, Micronesia, Philippines, Taiwan, and China up to southern Japan. Eastwards, it is at home in Kiribati and Tuamotu. Southwards, it reaches Vanuatu, the Fiji Islands and Tonga. The distribution reveals areas of discontinuity, it is probably ampler because this is a small fish, wary and shy, and that hardly stumbles in the nets. It spends the whole day in a den and is active only during the night when, thanks to its mimetic patterns, is practically invisible.

It lives moving from one hiding place to another, between rocks and madrepores, up to 50 m of depth.

The size of the body, compressed on the sides and doubled by the fins, does not exceed the 20 cm. The livery, almost black with brown reflections, is dotted with small white spots and drawings which, in the semidarkness mislead the predators. 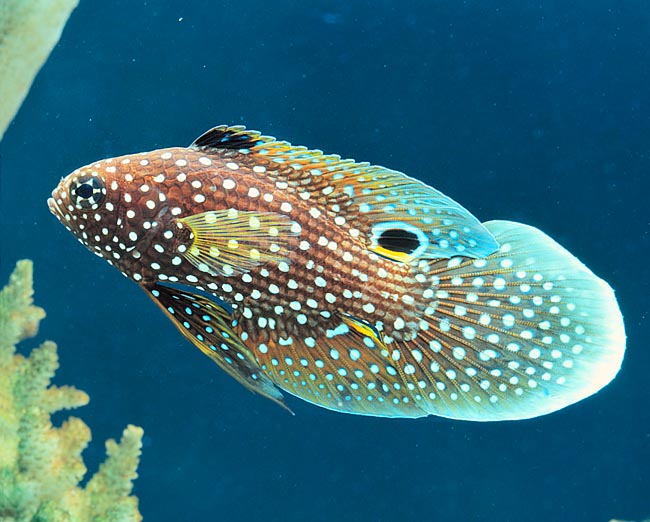 Due to its shape, we do not know where the head and the tail are, and a false eye, drawn on the dorsal, evokes among the rocks the disturbing head of a moray eel in ambush, the Gymnothorax meleagris which has more or less the same drawing.

The mouth is moderately protractile, with small sharp teeth on the jaws and some palatine teeth and on the vomer.

In its small way, the comet follows like the true groupers a carnivorous diet, predating crustaceans and small fishes. It is not a problem to nourish it in aquarium, but apart the splendid livery it’s a fish giving scarce satisfactions because it hides during the day and shy as it is, in a cramped environment, is likely to be continuously stressed by the other guests, ready to steal the food from its mouth.

The females spawn 300-500 eggs, stuck with adhesive threads to the substratum and keep the watch near the nest. The eggs hatch in 5-6 days at about 26 °C.

The Calloplesiops altivelis reproduces pretty easily in captivity. It should be too expensive to fish it and the specimens of the trade come usually, therefore, from fisheries. In nature, the populations may double in 1,4-4,4 years. The vulnerability index of the species, moderately low, is of 30 on a scale of 100.