Species similar in various aspects to the Spotted ratfish (Hydrolagus colliei), another Chimaeriformes that belongs, however, to the family of the Chimaeridae.

The genus Callorhinchus comes from the Greek words “kalos” (καλός) = beautiful and “rhynchus” (ῥύγχος) = snout, beak, with obvious reference to the trunk, whilst the specific name milii honours the memory of Pierre Bernard Milius, French navigator and naturalist, who in 1800 met Bory de Saint-Vincent on the occasion of the “Expedition to the Southern Lands” of Nicolas Baudin. 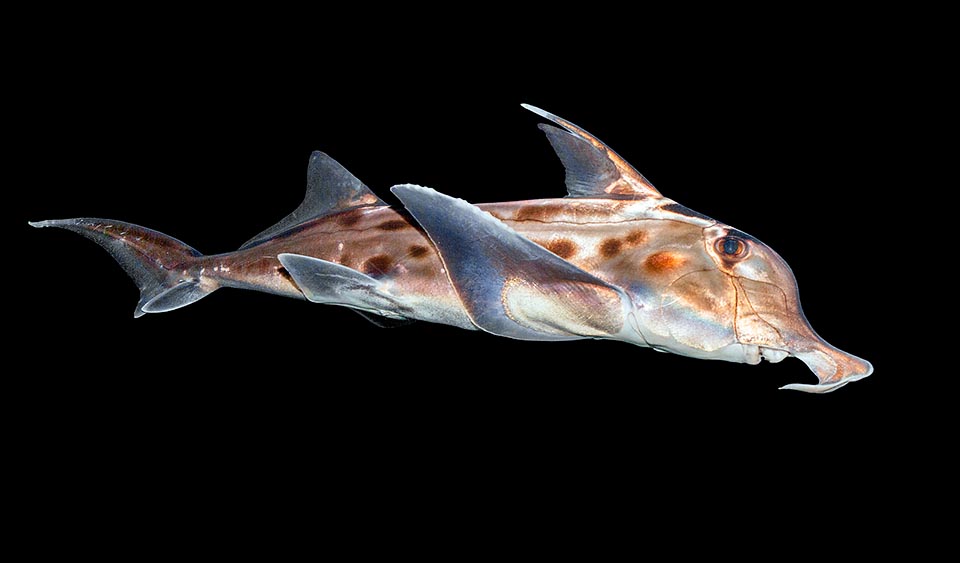 The Callorhinchus milii is a cartilaginous fish belonging, like the Hydrolagus colliei, to the order of the Chimaeriformes, group of “living fossils” born in the Paleozoic © Giuseppe Mazza

The Callorhinchus milii lives on the continental shelf between the southern coasts of Australia and New Zealand.

It may be met at small depths, even in the mouth of the rivers, when in spring it leaves the deep waters to reproduce along the sandy coasts. It has been found even at 600 m, but usually it swims between the 30 and 200 m of depth.

Like the Hydrolagus colliei, unlike the sharks, the Callorhinchus milii does not have scales and the gills are covered by a sort of operculum. It reaches a length of 125 cm with a silvery or brown with dark dots livery, and distinguishes easily from the other chimaeras due to the elongated snout with a sort of small sickle, spatulate like a plough, with which it explores the bottom. 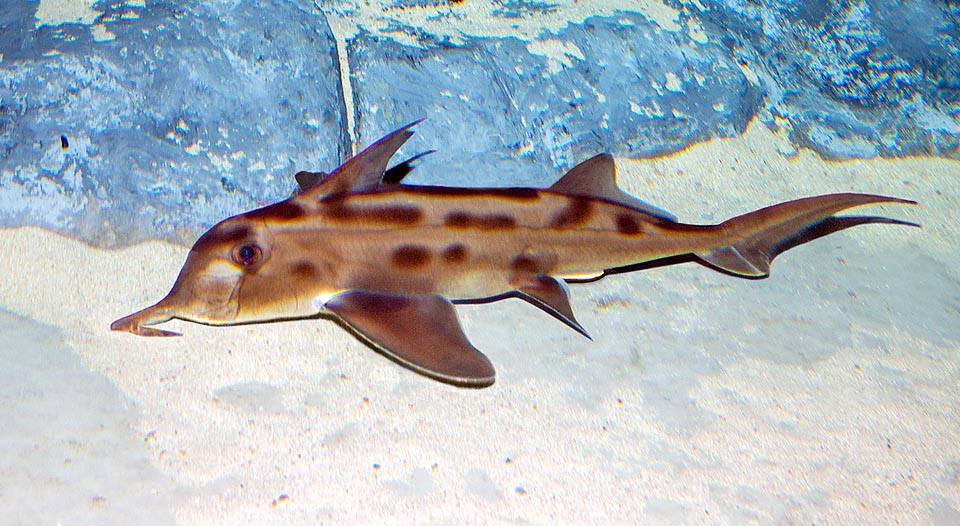 It easily distinguish from the other Chimaeras for the elongated snout, a sort of sickle, spatulate like a plough, with which it explores the bottom eating mainly crustaceans and benthic molluscs. Like the Hydrolagus colliei it has a showy spine, with defensive function but here it seems having no venom, close to the first dorsal fin © G. Mazza

Large pectoral fins, dorsal ones spaced and like the Hydrolagus colliei we note a showy spine, close to the first dorsal fin, with defensive function. In this case it appears that it has no venom and also these males have on the head a small lumpy club for holding the female while mating, to which add, unique instance in the Chondrichthyes, two retractable pelvic clasps for a perfect grip.

Two couples of very solid teeth are placed on the upper jaw, whilst the two teeth of the lower jaw form practically a wide flat plate not less mineralized, a solid hammer for grinding the preys. Unlike sharks, they are not, therefore, sharp teeth to lose, replaceable in case of accident.

The Callorhinchus milii nourishes mainly of crustaceans and bivalves, but also of small fish and various small benthic animals. It has big eyes but it finds them, also in perfect pitch darkness, thanks to its trunk, rich of sensors, capable to locate even the smallest movements on the bottom and the weak electric fields emitted by the preys. 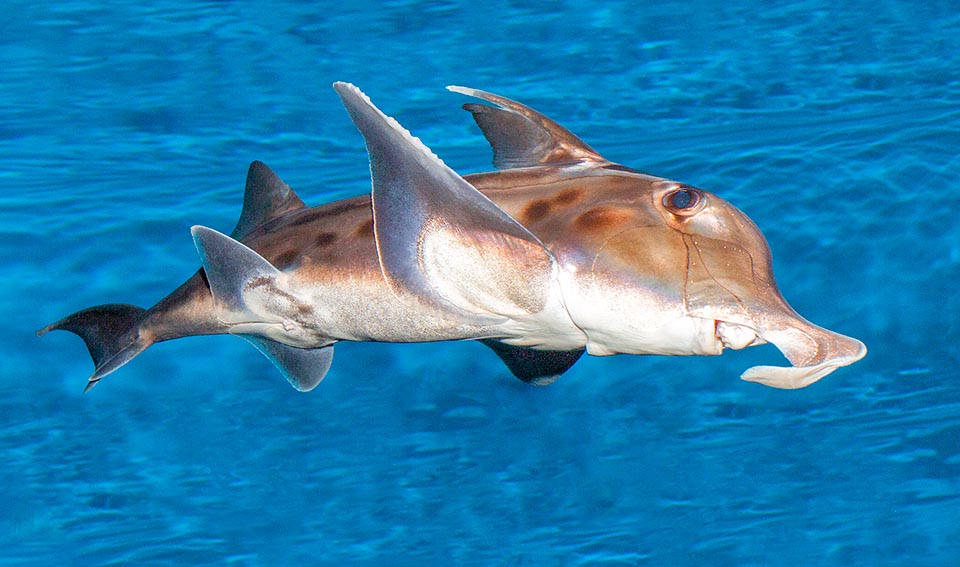 It is not a social fish, but, after the fishermen, in winter the nets contain only males or females, and this may lead to think that, apart the reproductive period, the two sexes live separate. Unlike the Hydrolagus colliei, the Callorhinchus milii is in fact fished for its edible flesh that, without too much respect for the Paleozoic, in Australia and in New Zealand, ends often on the small trays of the fast foods along with the chips.

It is not a particularly endangered species today (2019), but resilience is weak, with a theoretical doubling of populations in 4,5-14 years, and the fishing vulnerability index marks 55 on a scale of 100. 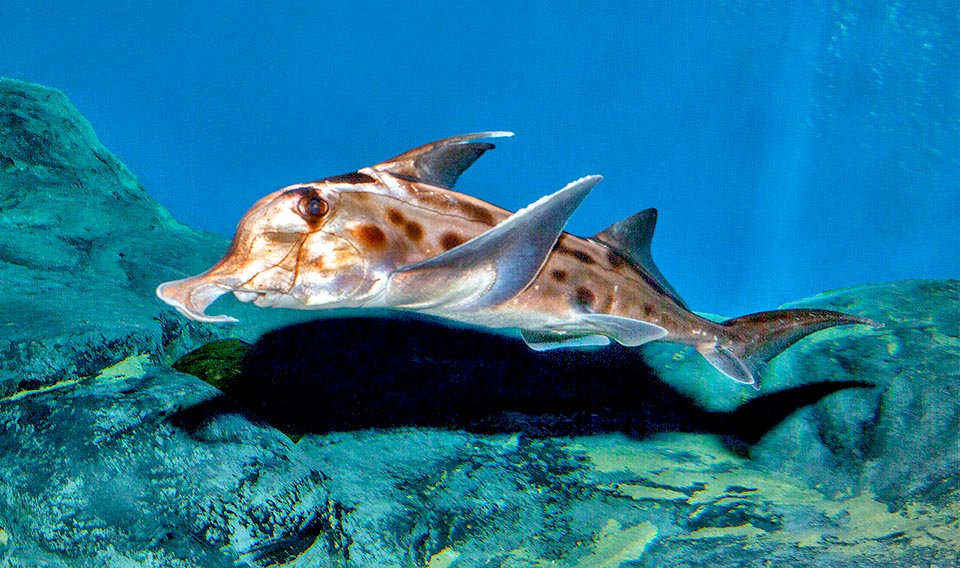 The Callorhinchus milii is the first cartilaginous fish whose genome has been sequenced, because it was the smallest and hence the easiest of its group. About 450 million of years ago, the vertebrates and this fish, practically unchanged, had a common ancestor and some of its genetic sequences, compared with ours and those of the vertebrates, generally, have revealed useful for the study of the evolutionary mechanisms.