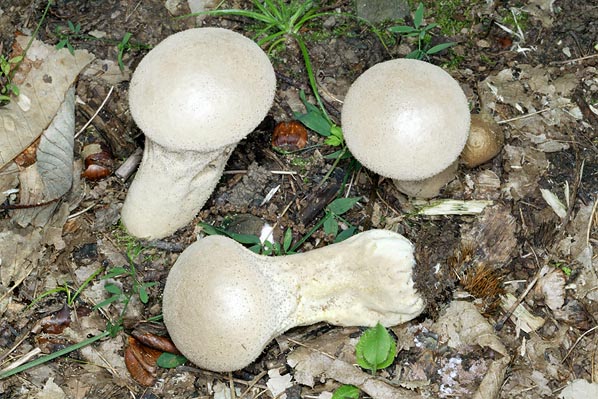 The Calvatia excipuliformis is edible when young, till when the gleba is white © Giuseppe Mazza

The name excipuliformis comes from the Latin “excipulum” = vessel, and “forma”, that is, having the shape of a vessel.

The carpophores are formed by a covering (peridium), having a protective function and containing the gleba (fertile part) and the sub-gleba (sterile part). 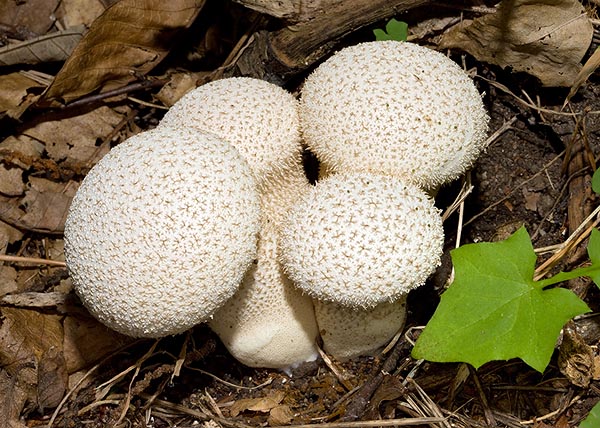 The colour of the Exoperidium may vary from white to whitish or brownish-ochre, from reddish-ochre to brown violet.

The gleba, initially white, is firm and then becomes, thanks to the process of autolysis, a dusty dry mass containing the spores.

These are freed through an “ostiole”, apical opening, expressly programmed, or by the breakage of the whole peridium.

The subgleba is a portion supporting the fertile part and has more or less the same structure as the gleba, but is sterile; it may be absent or present, in which case it is rudimentary, that is, just perceptible pr well developed and more or less extended.

Carpophore: up to 15 cm tall fructiferous body with a diameter up to 10 cm. The head is roundish, spherical or just flattened, at times with a not much pronounced umbo, sustained by a big and long pseudo-stem, more or less cylindrical, enlarged or attenuated at the base, at times pleated or even scrobiculated, wrinkled.

Exoperidium: its surface, initially white, then caffe latte, finally brownish, is covered by small deciduous aculea which confer it a grainy appearance. 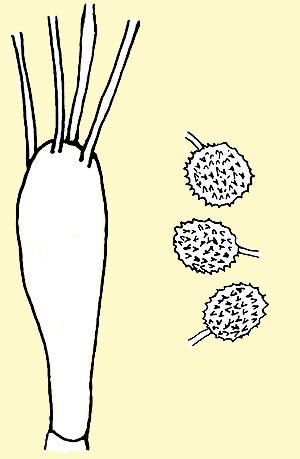 Gleba: composed by a fertile part (placed on the upped part of the fungus) and by a sterile one (placed in the lower part of the same); the separation of the fertile gleba from the sterile one is marked by a pseudo-diaphgram not always visible; the colour is white at the beginning, then greenish, brown-black when ripe; powdery.

Habitat: it grows in summer and autumn in the airy forests, in the meadows, in the grass, from the plain to the limit of the Alpine micro-forest.

Edibility: edible when young till when the gleba is white.

Remarks: it is a species typified by the more or less slender shape, with a pseudo-stem well developed and at times very long.

However, this fungus may be mistaken with Calvatia utriformis (Bull.: Pers.) Jaap, which has, anyway, the outer surface of the exoperidium wrinkled at first, then chiselled, of bigger size and the spores are smooth at the optical microscope; the Lycoperdon perlatum Pers.: Pers., which has on the contrary, the outer surface covered by longer and detersile spines which leave on the surface some scars forming a network and the spores are smaller.