The Calyptorhynchus lathami Temminck, 1807, is a bird belonging to the order of the Psittaciformes, family Cacatuidae and sub-family Calyptorhynchinae.

In contrast with the name of the species, it was actually discovered and studied by the Dutch biologist and zoologist Dr. Sc. Coenraad Jacob Temminck, who brought home some couples from his voyages to Australia. He describes it in his opus “Observations sur la classification méthodique des oiseaux et remarques sur l’analyse d’une nouvelle ornithologie élémentaire” Dufour, Amsterdam, Paris 1817, published while he was the scientific director of the Natural History Museum of Leyden, in Holland, honouring the species to his friend John Latham, English biologist and naturalist, employee of the Dutch East India Company, whom he had met during his exploration campaigns in the Indies. That was also a way to thank the Company which had furnished him various exotic birds which he had catalogued and exposed in the Museum.

The Italian name is Cacatua nero-lucido, in English Glossy-Black Cockatoo or Casuarina Black Cockatoo, due to the interest the species has for the tasty seeds of Casuarina, great trees of the family of the Casuarinaceae, which has 17 species endemic to Australia, the south-eastern Asia and the western Pacific Islands. Among cockatoos somewhat similar to the Calyptorhynchus lathami, we have the Calyptorhynchus funereus, of bigger size, called Cacatua dalla coda gialla in Italian and Yellow-tailed Black-Cockatoo in English, and the Calyptorhynchus banksii, called Cacatua dalla coda-rossa di Lethami in Italian and Red-Tailed Black Cockatoo in English, for sure the species more similar for size, sexual dimorphism, issue and habitat.

The Calyptorhynchus lathami has at least three subspecies, originated in Australia due to the geographic isolation.
Like the main species, endemic to various regions of eastern Australia, also these ones are located, with different density, in the eastern part of Australia and nearby islands.

– the Calyptorhynchus lathami lathami, the most eastern subspecies, rather rare, loving in the south-eastern Queensland from Mallacoota to Victoria, even if isolated groups have been found in New South Wales and in the States Forests of the Pilliga, called also Pilliga Scrub, semi-arid area of the temperate zone of New South Wales. In all these ecotypes, the arboreal life of these birds is always associated with few species of trees, mostly belonging to the genus Casuarina, grouped in small woods or bushes.

– the Calyptorhynchus lathami erebus, the most common subspecies, with a greater density than the previous one, autochthonous to the central Queensland, where it colonizes small bushy woods of Casuarina. 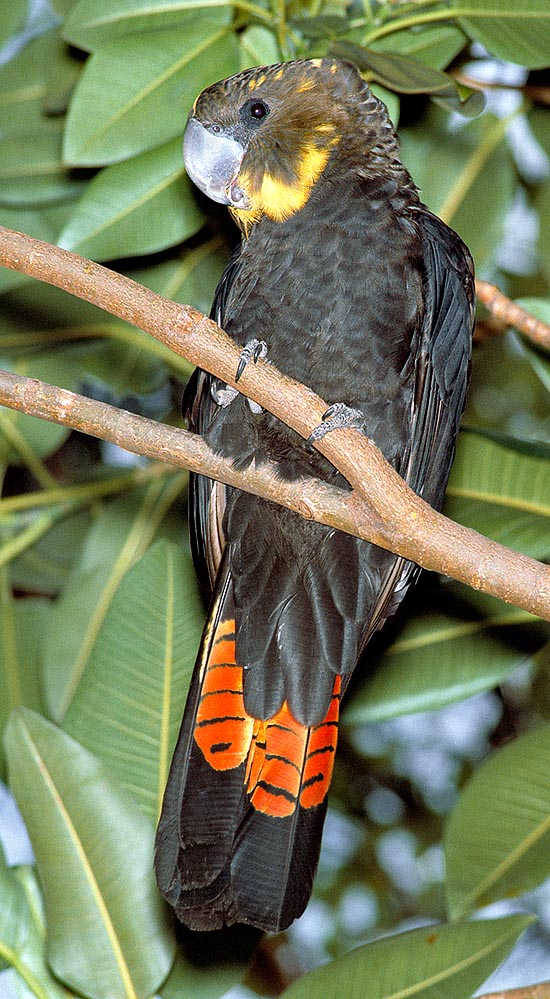 – the Calyptorhynchus lathami halmaturinus, the subspecies under major risk of extinction, placed by the IUCN into the red list of Threatened Endangered Species. It is endemic to the Kangaroo Island, the third Australian island as for size after Tasman and Melville Islands, where it is confined in the north-western part with 100 units only, as it results from the counts done by the IUCN and the WWF. The biological cycle of the Calyptorhynchus lathami halmaturinus is strictly related with three autochthonous plants belonging to the families of the Casuarinaceae and the Myrtaceae.In particular, for the Casuarinaceae, the Allocasuarina verticillata, a tree which can reach even the 10 m of height, called in Australia Drooping Sheoak and present mostly in the interior of the island, and the Allocasuarina littoralis, the Black Sheoak, reaching the 8-15 m and growing both along the coasts and also in the inner part, the so-called Inland. The females nidify in the lairs dug by the mammals in these trees, thus entering often in competition with them, and both males and females do consume their reproductive cones. They snatch them with their zygodactyl feet and crush them, separating, with their fleshy tongue, the seeds they eat. It goes without saying that during this complicated operation many seeds fall on the ground, thus beginning new vital cycles for the plant. The dissemination, especially if the animal is disturbed, can happen even at some distance from the tree, and the cockatoos, with their zoomophilous propagation, bear an essential ecologic function for the eastern regions of Australia. The third species of plants being utilized, that belonging to the family of the Myrtaceae, is the Eucalyptus cladocalyx, called Sugar Gum in Australia. The Calyptorhynchus lathami halmaturinus, in fact, do nourish of the berries it products. The variation in the population density of these three vegetal species, caused by man with the deforestation, fires and the agricultural exploitation of the nearby lands, which causes losses of balance in the fertility of the soil, about mineral salts, nitrogen and available water, no to forget the competitiveness of the cultivated species, reflects negatively on the vital cycle of these birds which get altered their ecology, with catastrophic consequences on the density of their population. Lack of trophic resources, and lack of natural roosts and trees where to settle the nest, which delay and limit their reproduction.

Till the first half of the last century, the Calyptorhynchus lathami lived along the whole north-eastern Australia. Nowadays, it is confined in few areas, from the coast of the Eungella National Park, to the eastern side of Queensland, up to the Mallacoota in the Victoria region. In the other Australian regions, where it was autochthonous, it has extinguished due to the deforestation and the agriculture. In the wild they get also the competition of some wasps, which kill the chicks with their poisonous stings, but this is not itself a sufficient cause to determine their extinction. The IUCN has inserted it into the red list of the threatened endangered species, the CITES prohibits its trade.

The habitats of these birds are very various. They vary from the forests along the coasts of the eastern Australia, to the dry forests of eucalypti, to the bushy forests of the inland, or to those present along rivers and brooks. They are attracted by plants belonging to the genera Casuarina and Allocasuarina, both for the construction of the nests and for the seeds, which are the main source of their alimentary diet. The Calyptorhynchus lathami lives usually in groups of 2 to 10 individuals of the same species, which can live together with similar species, such as the Calyptorhynchus funereus or the Calyptorhynchus banksii, seen that they are not too aggressive, even if they protect their nests and the areas where the food is localized. As we have said, they utilize the great tree trunks, even if dead and fallen on the ground, for building their nests.

The Calyptorhynchus lathami is the smallest of all the black Cockatoos. The males reach a length of 46-50 cm and the females are somewhat smaller. The wingspan reaches the 90 cm, and the weight varies between 400 and 600 g. They have the classical black robust and bent beak, an erectile crest typical of the Cockatoos with voluntary mobility, but of lesser dimensions in respect to the other members of the family. The black colour is the prevailing on all the body, both in the males and in the females, even if in the male the head is chocolate-brown and the tail has brilliant flame-red dots on the rectrices. The females have a darker brown head, rectrices with orange-yellow stripes, and, above all, a sort of a yellow collar, absent in the males, which is without any doubt, a marking character of the sexual dimorphism. The foot is zygodactyl, suitable for the arboreal life.

The Calyptorhynchus lathami is a monogynous (monogamous) species. The couples are stable, and keep united for the life. The female prepares the next in the hollows of the dead trees or on trees with big trunk. The precise number of eggs laid is not known, but it looks like they are 3 or 4, bred solely by the female. After a week from the deposition, this can get out for feeding for short periods, but usually it is the male which cares its subsistence, as well as for the pullets, which come to life after 20-24 days of incubation. Also the mother, once recovered its strengths, helps then the partner in nourishing the young, for about four weeks, till when they are autonomous for the flight and the research of the food. The progeny leaves the nest in September-October, when the parents mate for the forthcoming heat season.