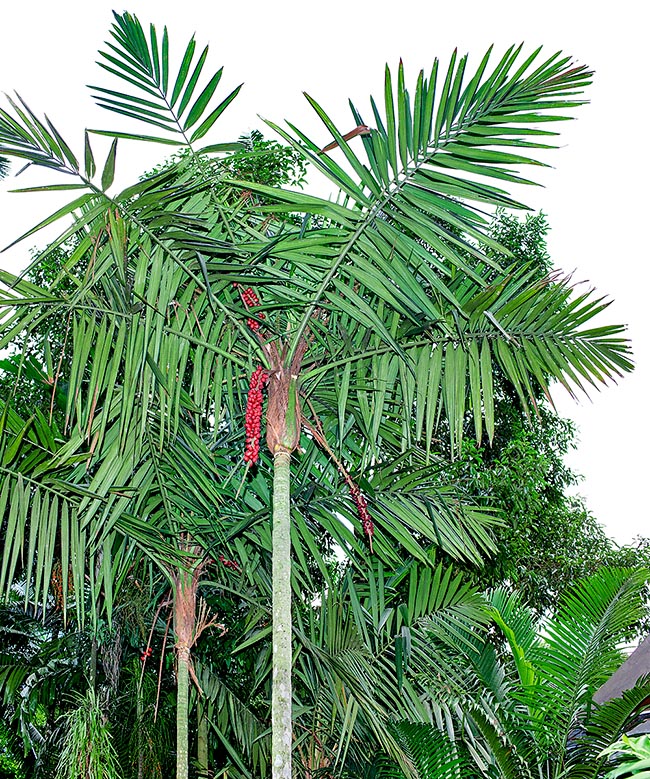 Palm endemic to Ambon Island, in the Maluku Archipelago, the Calyptrocalyx spicatus is the biggest species in the genus. The solitary stem, even 25 cm broad, can be 10 m tall. The crown has at most 12 leaves © Giuseppe Mazza

The genus Calyptrocalyx is distributed in Indonesia, Papua New Guinea and in the Maluku Islands. The species Calyptrocalyx spicatus (Lam.) Blume 1843, is the only one coming from Ambon Island, in the Maluku Archipelago and is common in the tropical highland wet forest, on volcanic soils.

The name of the genus Calyptrocalyx comes from the Greek terms “kalyptra” (hat) and “kalux”, (calyx), with reference to the modality with which the outermost sepal covers the other ones when the flower is in bud.

The name of the species spicatus, refers in Latin to the shape of the not ramified inflorescence. This characteristic is present in all species of the genus Calyptrocalyx, but here the inflorescence reaches remarkable dimensions.

Calyptrocalyx spicatus is the biggest species of the entire genus, unlike most of the other species that have a smaller size.

The stem is solitary, not multi stemmed as is found instead often in the other Calyptrocalyx, up to 10 m tall, but usually between 7 and 8 m. It is also unusually broad for the genus, having a diametre of up to 25 cm, of pale brown colour and characterized by dark spaced rings, traces of the fallen foliar bases.

The growth rate is slow.

The crown is sparse, as it never presents more than 12 pinnate leaves and is spirally arranged, up to 3,6 m long. The emerging ones may get an orange red colour. The leaves are divided in thin segments shaped like spears, of pale green colour, with pointed edges, up to 60 cm long.

The segments are diametrically opposed in respect to the rachis, with a drooping posture that gives the leaf a hanging shape. The sheath that continues the petiole wrapping the stem, displays many brown fibers on the edges, whilst the central part is smooth and has a pale green colouration.

The inflorescence emerges among the petioles over the interfoliar sheath, and is distinctive of the species, being upto 3 m long in one only spike that has no ramifications. Often, one plant bears only one big spike. The inflorescence is composed by male and female flowers that originate oval fruits, up to 3 cm long, of bright red colour. The fallen seeds germinate easily in 8-16 weeks.

This species is not yet easy to find in cultivation, contrary to the other species of the genus and can be found mainly in the botanic gardens and in the big private collections. 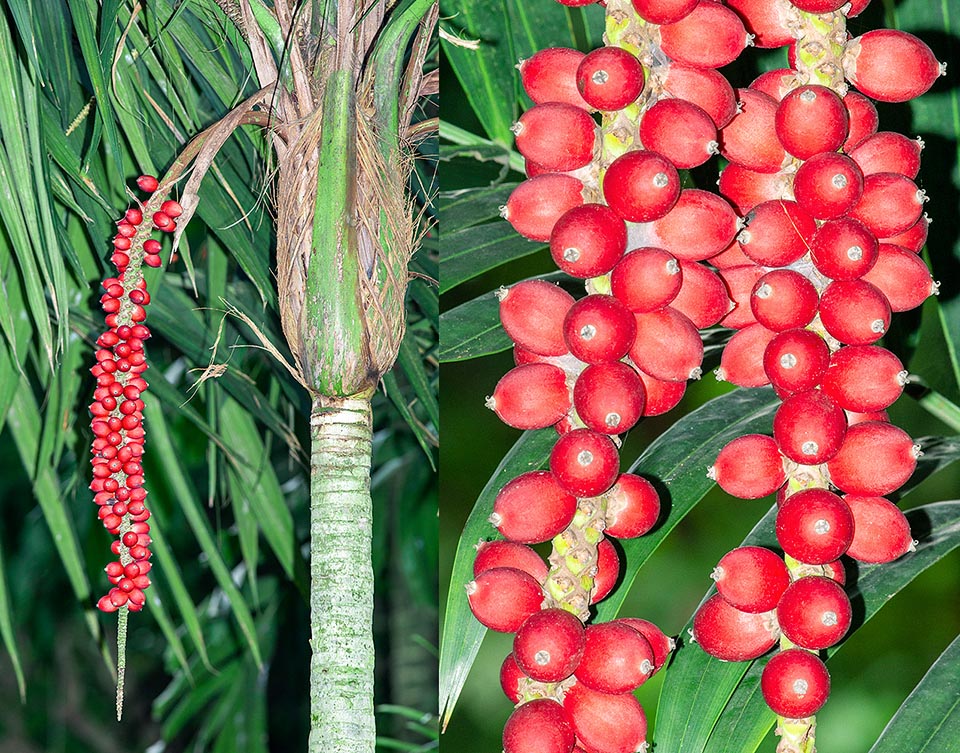 The ovoid fruits, up to 3 cm long, are bright red. The seeds are chewed by the natives like those of the Betel tree © Giuseppe Mazza

It might have a potential as an indoor plant, like the other species of the genus, seen also its resemblance with Howea forsteriana, from which comes the common name “Maluku kentia palm”, that is, “Kentia of Maluku Islands”.

The conditions for the best growth of the young specimens require filtered exposition to the rays of sun, whilst the adults, conversely, grow better in full sun. It does not stand the winds, especially the dry ones, that can easily burn the leaves. It prefers fertile soils, rich in humus, not calcareous, constantly humid but very well drained. Due to the tropical origin, it’s a species very sensitive to the cold, cultivable in zones where the frosts do not occur (USDA-10b-11).

In the sites of origin, the local populations have the habit of chewing the fruit, similarly to what is done with those of the Betel tree (Areca catechu). The trunk is often used as wood for the constructions.