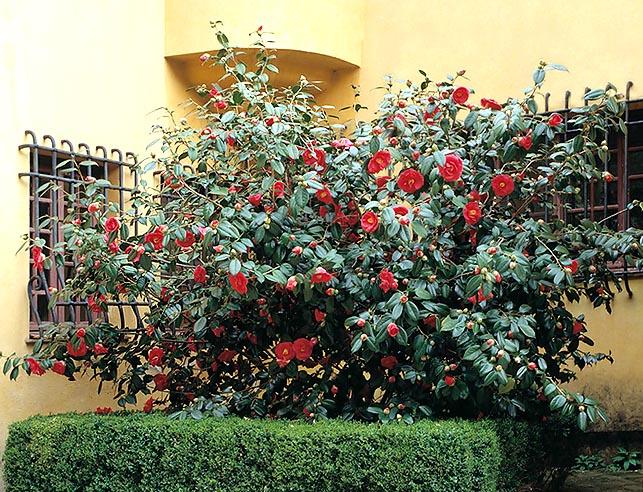 Although usually lower, the Camellia japonica may be 10 m tall © Giuseppe Mazza

The plant is native to South Korea and Japan (Honshu, Kyushu, Ryukyu Islands and Shikoku), where it grows in the humid forests between the 300 and the 1.100 m of altitude.

The genus was honoured by Linnaeus to the Moravian botanist Jesuit missionary, Jiří Josef Kamel (1661-1706), not for having introduced in Europe the camellia, which he did not know, as often is reported, but for his studies on the Philippines flora, which he signed with his Latinized name, Camellus; the Latin name of the species “japonica” = of Japan, refers to one of its origin countries.

The Camellia japonica L. (1753) is a shrub or a much ramified tree with vertical standing, tall up to 10 m, even if, usually, it keeps much lower ; the branches are greyish, those of the current year are purple brown with alternate leaves on a short petiole (0,5-1 cm).

The foliar lamina is elliptic and oblong, 5-12 cm long and 2,5-6 cm broad, coriaceous, dark green on the upper side, pale green and spotted with brown glandules below, with the central nervation, prominent on both sides, of greenish yellow colour; the margins are indented and the apex is sharp with rounded point. 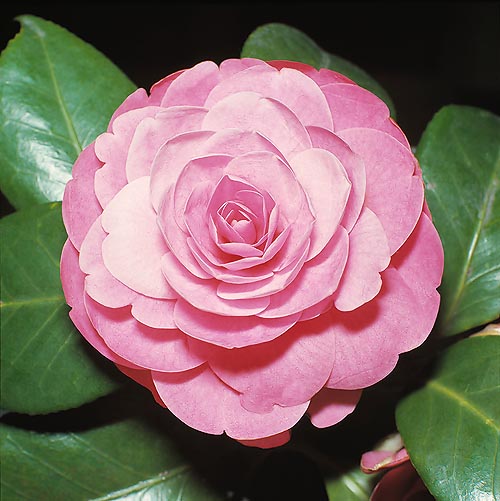 There are 2000 varieties. Endless nuances from white to red and different forms ©Mazza

The stamina are yellow, 2,5-3,5 cm long and the ovary is ovoid and tri-locular.

The fruits are globular capsules of 3 to 4 cm of diameter, containing 1-2 seeds per loculus, of brown colour, with a diameter of 1-2 cm.

It reproduces by seed, in which case the first blooming happens after 4 or more years, by air layering, to be done by early winter, and grafting by early spring.

The most common system is however by cutting in summer-early autumn, utilizing portions of the current year branches, 10-15 cm long, semi-woody, with four nodes, leaving the leaves on the upper two ones, placed to root in siliceous sand or agri-perlite in the shade and in wet location; the rooting will take place in 100-120 days.

The Camellia japonica is in absolute the most cultivated between the ornamental camellias and thanks to the crossings and hybridizations, but also to the facility with which happen bud mutations in this plant (spontaneous mutations at the level of the bud generating a branch with flowers of different colours and/or shape), have been selected hosts of varieties.

It is believed that there are around 2.000 of them with endless nuances going from the white to the pink, the red, as well as speckled and spotted, and different shapes: at single flower, semi-double, double, at peony, anemone or rose flower. The flowers stand out from its intense and glossy green, intrinsically of great ornamental value.

Introduced in England in 1739, it spread in Europe by the second half of the same century; in Italy, the first was planted in Caserta in 1786, becoming famous at once and, quite soon, it spread towards the north of Italy, in particular in Tuscany, where an important selection and crossing work started with the aim to obtain new varieties. 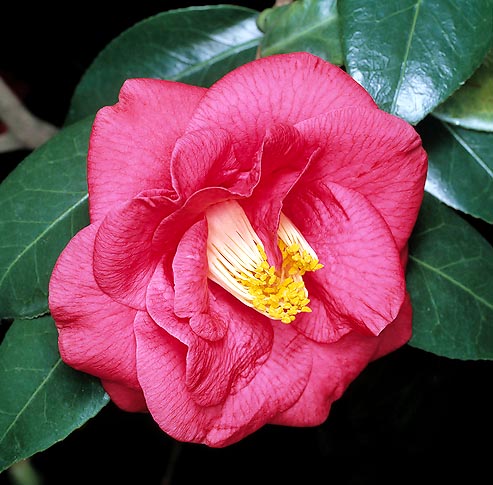 Winter-spring blooming, with corollas of 6-10 cm of diametre © Giuseppe Mazza

It was very popular for about one century, but then, by the end of the ‘800 there was a decrease in interest; the same has come back by the second half of the ‘900, in particular in those areas which are climatically favourable for its cultivation.

It loves cool and humid climates and is quite resistant to the low temperatures, down to about -10° C and even less in some varieties, but the flowers get damages when the temperature drops under the 0° C.

It prefers fertile soils, loose, rich of organic substance, well drained, sub-acid or neutral (pH 5-7) and kept humid; the best location is under light shade and at the shelter from the wind.

For keeping the soil humid and protecting the roots from excessive heat, it is useful to place a mulching at the base of the plant.

The fertilizations, moderate, are to be done at the vegetative awakening, utilizing possibly organic, or with slow cession, manures, and specific for the acidophils.

It well adapts to the cultivation in pot utilizing soils for acidophils with addition, by around the 25%, of siliceous sand or agriperlite in order to improve the drainage, keeping in mind that, especially in summer, a constant humidity must be guaranteed.

If for the watering calcareous water is utilized, a yellowing (ferric chloroses) may happen, in this case it is to be treated with ferrous chelates.

If any pruning is necessary, this is to be done by the end of the blooming.

It is fairly resistant to the diseases. In unfavourable conditions of cultivation, it may be subject to fungal diseases, some of which cause damage to the leaves or the buds (in particular, Sclerotinia camelliae and Sclerotinia sclerotiorum), therefore preventive treatments to be done by late winter with contact fungicides based on copper and sulphur may be useful. It is to be checked periodically in order to quickly intervene in case of attacks of mites, aphids and red scales. 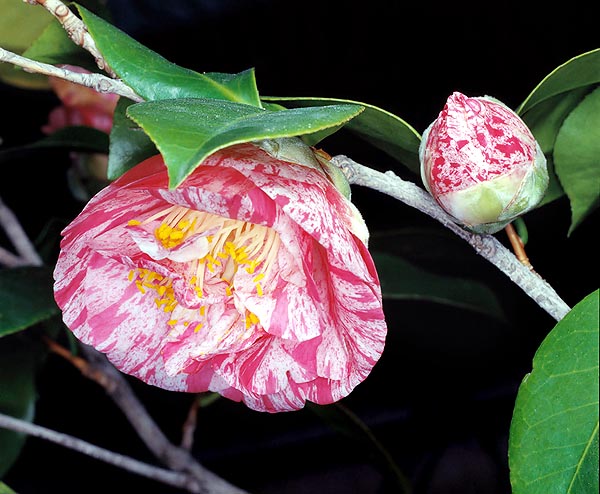 Speckled and dotted forms are not rare and the oil gotten from the seeds has various uses © G. Mazza

The flowers are rarely utilized as cut flowers due to their short duration (2-3 days) and delicacy, which render its transportation difficult, whilst the cut foliage is long lasting (2-4 weeks) and is utilized for floral compositions. In China, the flowers are used as antihemorrhagic and their extract has anti-bacterial properties. The seeds contain up to the 40% of oil rich in unsaturated fatty acids (oleic, linoleic and linolenic acids) utilized in the cosmetic industry, as lubricant, but also amply for alimentary utilization, with anti-oxidant and anti-bacterial properties.